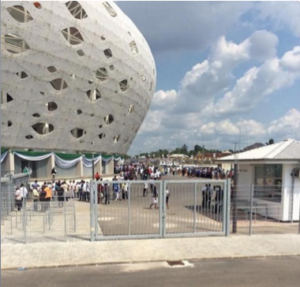 The Akwa Ibom State government has declared entry into this weekend’s Africa Cup of Nations qualifier between Nigeria and Tanzania free to encourage large turnout of fans to cheer the Super Eagles to victory.

The Commissioner for Sport and Youth Development, Mr. Monday Ukoh, said this on Wednesday during an interview with a local radio station.

According to him, the development would ensure a full house at the 30,000-capacity Ibom International Stadium, the venue of the match.

Ukoh explained that the state government was not also unaware of the economic challenges facing many Nigerians, especially youths, hence the need to assist them with free tickets to watch the game.

Football fans in Uyo, however, appealed to Akwa Ibom government not to politicise the tickets as such actions in the past had denied genuine football fans in the state the chance to watch the Super Eagles.

One of the fans, Abasiama James, said the free tickets by the state government was commendable, adding that it should be made available to everybody on first come first serve basis.

“Nice one, but the tickets should be made available for everybody; they should not politicised as usual.

“It is not a political event, it’s a football match of the national team not a political party team, so the idea where only political groups are given the tickets should be discontinued,” he said.

As of Tuesday evening, most of the invited players had arrived for the game and trained under new coach, Gernot Rohr.

Manchester City striker, Kelechi Iheanacho, did not train with the rest of the Super Eagles for most parts in Rohr’s first session.