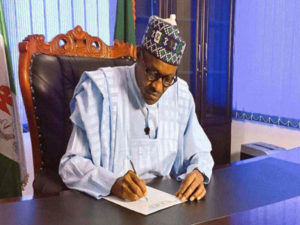 A statement by the presidential aide did not, however, say when the fiscal document was assented to.

Enang said: “The legal implantation of the budget, therefore comes into effect, which will result in employment in the formal sectors, and informal sectors through project implementation and employment.”

He said the President directed that budgets of listed agencies be laid before the National Assembly in line with the Fiscal Resposibility Act 2007, in addition to, and independent of the annual Appropriation Act.

He explained that this is a requirement of the law that the National Assembly should consider and pass such budgets.

“The vacancies created by retirement in each of these parastatals and the new employable vacancies are determined by the budgetary requirement of the agencies as will be approved by the National Assembly.

“Therefore, the other rationale for this is to create, regulate and open up employment in the different parastatals.

“It will also ensure accountability by the corporations because they will only raise and spend as approved by the National Assembly and will increase activism of the National Assembly in its oversight responsibility because they will be overseeing implementation as approved, and know surplus revenue to capture for subsequent years, appropriations.

“It will increase non-oil revenue internally generated. The agencies are under the law to keep 20 per cent of their operational surplus and remit 80 per cent to the Federal Government.

“This process of appropriation will ensure that no revenue is hidden because of the eagle eye of the approving National Assembly.”

On questions that some  budgets were already approved by legislative committees, Enang said it was not allowed by the Constitution.

The presidential aide quoted Section 62(4) of the Constitution: “ Nothing in this section shall be construed as authorising such House to delegate to a committee the power to decide whether a bill shall be passed into law or to determine any matter which it is empowered to determine by resolution under provisions of this Constitution, but the committee may be authorised to make recommendations to the House on any such matter.”