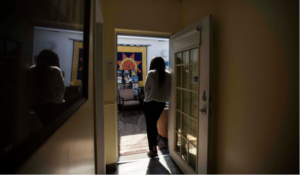 A 32-year-old Nigerian woman, simply identified only as U. O who is based in Canada, has shared her fears and why she ran away from home for being lesbian.

U. O, has been resident in Winnipeg, the capital of Manitoba, Canada, for three months.

She reportedly visited for a conference and afterwards abandoned her plans to return to her home country for fear of persecution, where homosexuality is a crime punishable by up to 14 years in prison.

She said her decision came after she found out her girlfriend was jailed and police were looking for her, WinnipegFreePress reports.

The lesbian, whose fate rests in the hands of a Refugee Protection Division board appointed adjudicator, Michal Fox, eventually applied for refugee protection division of the Immigration and Refugee Board of Canada to plead her case.

While she awaits a ruling from the Refugee Board of Canada, her hearing continues August 22, as was adjourned on Thursday.

She said several supporters from Winnipeg’s Lesbian, Gay, Bisexual, Trans and Queer, LGBTQ, community are the only family she has now, as according to her, her family in Nigeria has turned its back on her because of her sexuality.

She said, “Nobody there wants me. They want me dead.

“I’ll be lynched if I return to my family.

“So, I don’t think they deserve me.

“I would be happy to start a new life here and find a new love,” the lesbian girl added.

“Her journey toward refugee protection began in May, when U.O., who was an outreach worker at a non-governmental organization in Nigeria, attended an HIV/AIDS conference in Winnipeg, she told the Free Press in an earlier interview.

“That’s where she was when she found out her girlfriend; her first love from university whom she’d been seeing in secret had been arrested and forced to confess their relationship, and that her husband had outed U.O. to her employer.

“She was crying in a washroom during the conference when another woman approached and advised her she likely had a legitimate refugee claim.

“The hearing is set to continue August 22,” Fox ruled.