It is no more news that the Nigerian Senate has started the screening of ministerial nominees sent to the upper chamber by President Muhammadu Buhari. 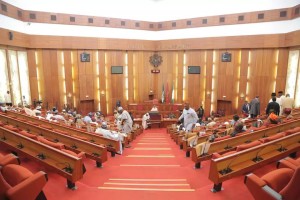 The exercise which has been beamed live by major television stations in the country has been the number trending topic in Nigeria’s social mediums and indeed on the streets of Nigeria’s major cities.

Top 5 facts about the screening process that Nigerians should be aware of.

1. As a rule, the Senate first of all concludes on all other pressing issues of the day pending before it, before the red chamber reverts to what is called ”a committee of whole” to start the screening exercise. During this period, the Senate president changes his seat from the elevated one to the lower seat signifying the new status of the Senate at that period.

2. The Senate also admits observers of the exercise which includes party chieftains, former senators, presidential advisers and the delegation of the nominees into the red chamber.

4. Before each nominee enters the chamber, his/her curriculum vitae (CV) is shared among the senators who peruse it, while the nominee is expected to highlight on all other achievements he or she has been involved in that is not mentioned on the CV.

5. Nominees are then subjected to series of questions by senators which mainly centres around their previous achievements and hints of their expected positions in the cabinet of President Buhari.

The 8th Senate has completed screening of 18 Buhari’s nominees and approved them as the ministers in two days, October 13 and 14. However, their portfolios still remain a mystery.