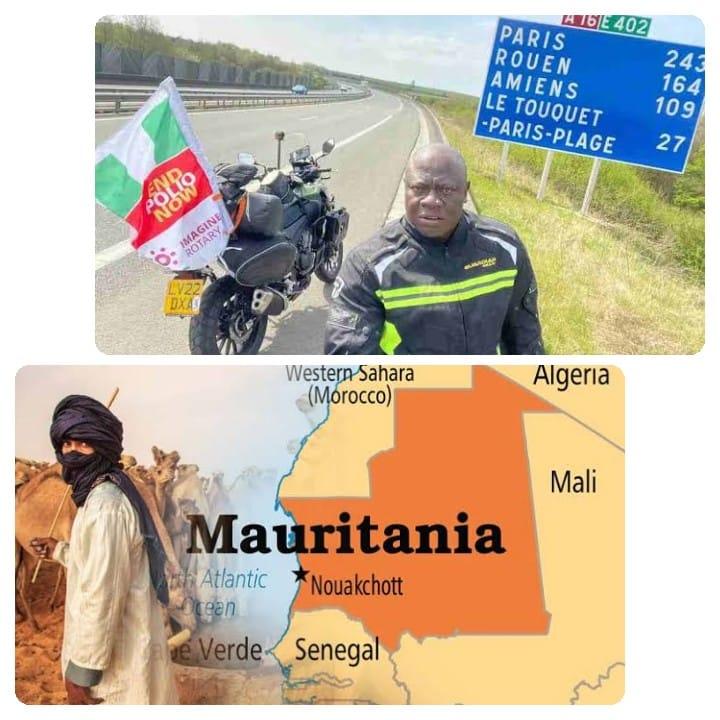 Nigerian man, Kunle Adeyanju who embarked on a “charity ride” from London, the UK, to Lagos, has revealed that Mauritania is not a country he wants to visit again for anything.

The entrepreneur and author embarked on the journey on April 19 and on Day 13, he tweeted that he had arrived in St. Louis, Senegal, from Mauritania after crossing the Sahara Desert through Morocco.

On day 14, Kunle via his Twitter account, shared some of his uneventful experiences of the adventure so far.

According to him, the Police, Immigration and Customs in Mauritania all worked together as a cartel to extort and make life hell for foreigners.

He went further to say he had visited over 75 countries around the world, and can categorically say that Mauritania is the worst of all the countries.

‘’And this cuts across the two major cities in the country and their two major border.
“The unpleasant experiences were not due to anything act of God or issues beyond my control, but entirely the wickedness and evil of men to men.

‘’I have visited over 75 countries around the world, and I can categorically say that Mauritania is the worse of all the countries I have experienced.

‘’The people are unfriendly, they are mean and all they think about when they see you as a foreigner is what they can grab, forcefully, deceitfully or cunningly from you.

‘’I visited the two major cities in the country — Nouakchott and Nouadhibou — and also passed through the two most popular border crossinga in the country and terrible experiences were all the same in all these places.

‘’I later learned that the country re-denominated its currency some months back, by knocking off one zero from the exchange rate.
”An example; the Euro used to change for 1euro = 400um, when they redenominated, it became 1euro = 40.

‘’However, the whole country still fraudulently sell things to foreigners at the old rate, thereby charging you 10 times more for purchases. And this cuts across all aspect of their economy in patronised, hotel, restaurant, fuel station and government agencies.

‘’At the border, the Immigration, Police, Custom and other security agency there will refuse to engaged you, but compel you to go through their touts whom they use to defraud unsuspecting foreigners.

‘’And this experience was not with the security agencies at the border alone, it cuts across all aspect of the economy I interacted with.

“At a restaurant, hotel, fuel station it was all the same. And all through I just kept wondering why everything is so expensive here.

‘’The Police, Immigration, Customs all worked together as a cartel to extort and make life hell for foreigners. In the heat of all these problems I had not choice but to part with $300.

‘’To me Mauritania is the worst shit-hole anyone can be, and a place I never want to visit again, even before the final episode of the day-light robbery.

‘’I didn’t take any picture in the whole 200km ride from the capital Nouakchott to Rosso, not because I didn’t want to take a shot, but because there was nothing to worth capturing.

‘’All you see are dead carcases of camel, goats, donkey etc littering the sides of the road as if that is the only place there is a desert.

‘’In all my write ups, I usually don’t dwell on the negative sides of things. I am always on the positive because I believe that is what we should shine the light on.

‘’But if I keep mute on these terrible experiences in Mauritania, it will be a disservice to humanity, it may continue to happen to other people, and coupled with the fact that this whole scam is perpetrated in all aspect of the economy on foreigners

‘’I experienced it in the hotel, restaurant, fuels station and government agencies.

‘’For me, Mauritania is not a country I ever want to visit again for anything. Honestly not in my opinion. It’s next to hell.’’