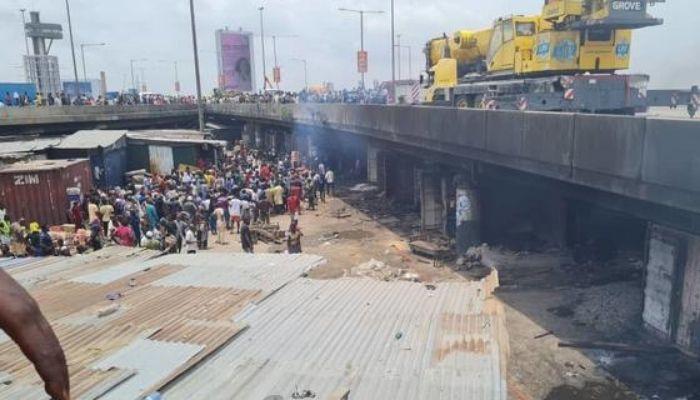 The Lagos State government has announced that a section of the Eko Bridge will henceforth be shut down as a result of the inferno that gutted it on November 4, 2022.

In a statement released by the state government , the Commissioner for Transportation, Dr. Frederic Oladeinde stated that there would be diversions which will allow the Federal Ministry of Works to carry out thorough integrity assessments that will detect the level of damage caused by the inferno, for the safety of motorists.

Hear him: ‘In line with this development, motorists are advised to navigate their destinations using Ebute Ero to Police Post through Adeniji-Adele Bridge to access Carter (Idumota) Bridge to Ijora Olopa to Ijora Oloye to Iganmu through Costain to continue their journey,’ he said.

He also stated that as an alternative, the road users could also use Ebute-Ero to Police Post to assess the Adeniji-Adele Bridge through the third mainland bridge to Herbert Macaulay Way, through Adekunle Street opposite Panti Police Station.

He further stated that they could go through Alagomeji to assess Murtala Mohammed Way through Oyingbo to Iddo and further to Ijora Olopa through Ijora Oloye to Iganmi and Costain to connect to their intended destinations.

According to him, Ijora Olopa (by LAWMA Headquarters), through Eko Bridge to Costain will also be accessible to motorists as from Monday 7thNovember, 2022.

Oladeinde gave the assurance that the Lagos state government was determined to ensure the safety of the commuting public within the metropolis and affirmed that the Lagos State Traffic Management Authority (LASTMA) would be stationed along the alternative routes to minimize the inconveniences.

On her part, the Lagos State Acting Federal Controller of Works, Mrs Forosola Oloyede revealed the plans made by the state to avert disaster, in a statement released, Friday night, intimating the general public of damage to the Ijora Olopa section of the Eko Bridge, owing to the inferno.

She raised concerns about the structural safety of some parts of the bridge which led to the closure of the opposite lane.

Her words: ‘Upon further assessment with the ministry’s Bridge Consultant; On behalf of the Minister of Works and Housing, Mr Babatunde Fashola, I want to inform the public that both bounds of the bridge, the Apongbon– Ijora Olopa and the Ijora Olopa–Apongbon sections will be closed to motorists.’

She explained that the closure would last till thorough inspection and integrity tests were carried out.

Hear her: ‘The reason for this is to avert any catastrophe and safeguard the life of pedestrians and motorists.’

‘The Inspection and Integrity tests are planned to be carried out as soon as possible. Further updates on the closure will be communicated as events develop.’

While expressing regrets for the inconveniences that the general public might presently face, she advised motorists to ply alternative routes and abide by directives given by traffic management agencies on ground to direct and manage movement.