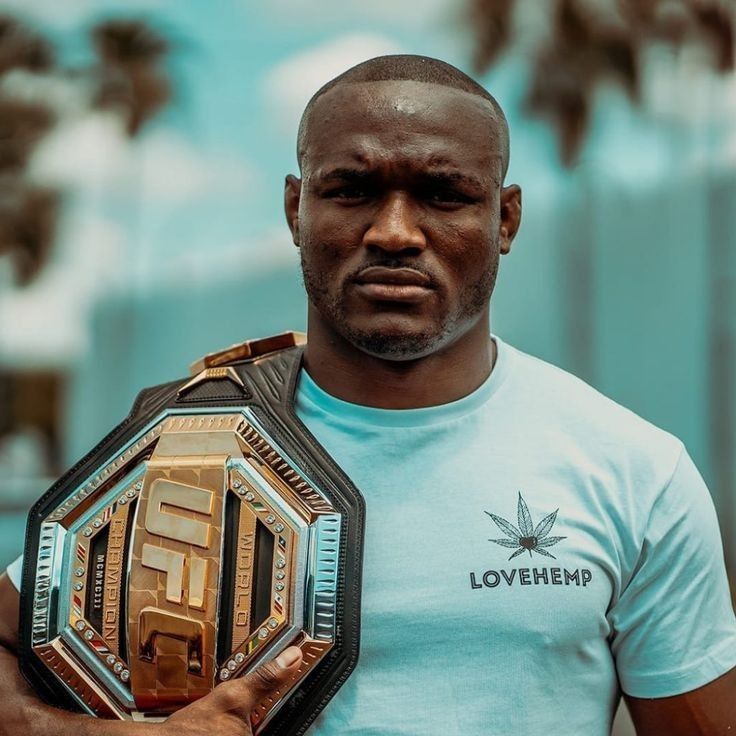 Kamarudeen “Kamaru” Usman (born May 11, 1987) is a Nigerian–American professional mixed martial artist, former freestyle wrestler and graduated folkstyle wrestler. He currently competes in the welterweight division of the Ultimate Fighting Championship (UFC), where he is the current UFC Welterweight Champion. Usman was also The Ultimate Fighter 21 tournament winner. As of September 27, 2021, he is #1 in the UFC men’s pound-for-pound rankings.  With a career record of 20-1, Usman’s only career loss came by submission in his second professional bout.

As a wrestler, Usman primarily competed at 84 kilograms, and was a 2010 US University World Team Member. Collegiately, he competed at 174 pounds, and was the 2010 NCAA Division II National champion, a three–time NCAA DII All-American and a NAIA National qualifier.[

Usman was born in Auchi, Nigeria. His father was a major in the Nigerian Army and his mother was a teacher. He has two brothers, Kashetu and Mohammed, the latter of whom is a mixed martial artist. Growing up with his mother and two brothers in Benin City, Usman struggled with squalid poverty and a life of destitution in his environment during his childhood. Usman’s father Muhammed Nasiru Usman, who became a pharmacist in the United States, brought his family into the country when Usman was eight years old, immigrating to Dallas, Texas. 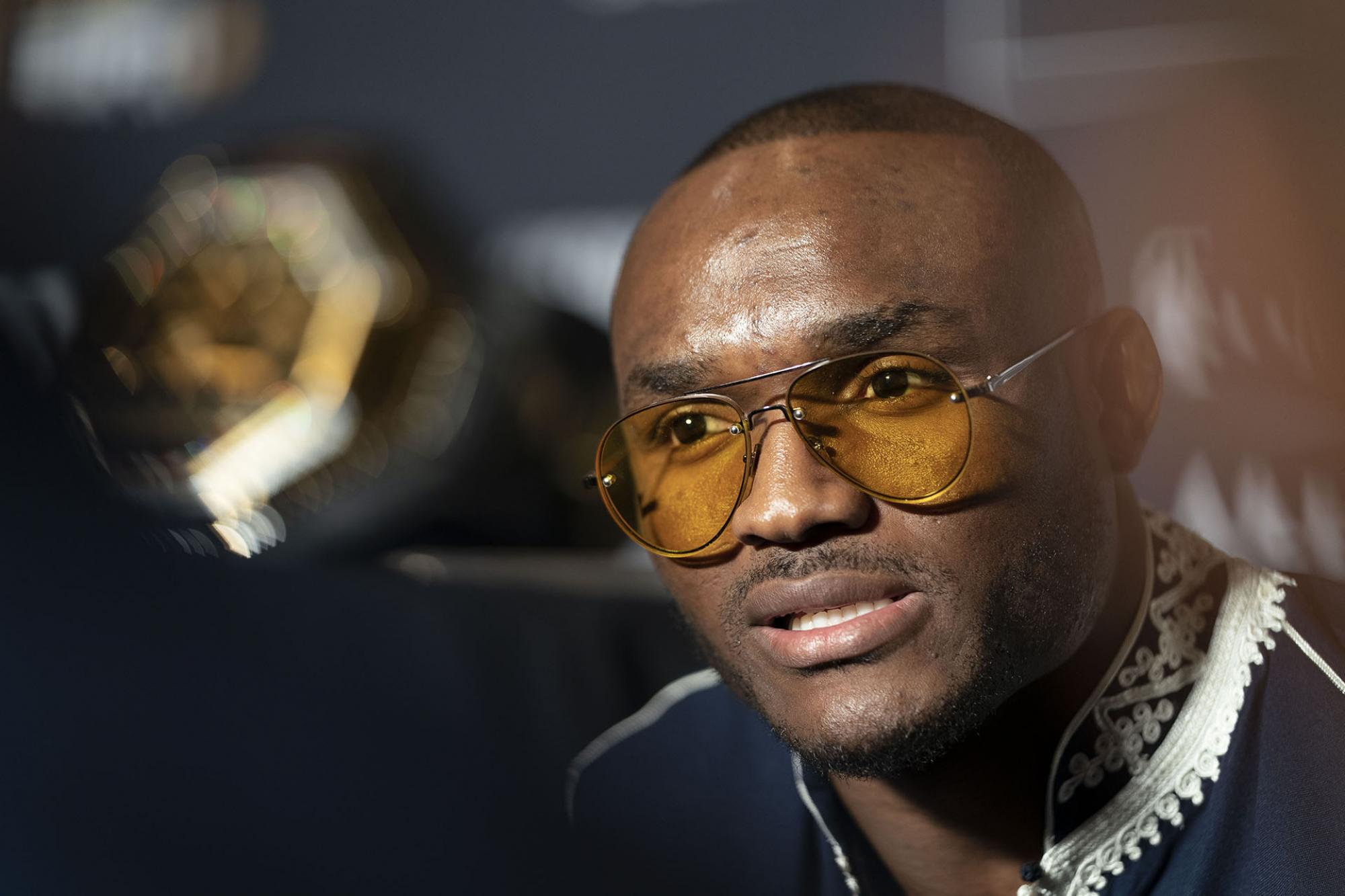 Usman started wrestling in his sophomore year in high school, at Bowie High School in Arlington, Texas. Because Usman’s wrestling coach at the time had trouble pronouncing his first name Kamarudeen, he got the nickname “Marty” when he joined the team and it stuck with him during his amateur wrestling career. After compiling a 53–3 record in high school wrestling and placing third at the Texas state championships, Usman wrestled alongside Jon Jones at the senior national tournament before leaving for college.

In college, Usman wrestled in Iowa at William Penn University for one year, where he was an NAIA national tournament qualifier in 2007, but was unable to attend the tournament due to a snowstorm; half of his team and his head coach, however, had left early for the tournament without him, which frustrated Usman and influenced him to leave William Penn. He later transferred to the University of Nebraska at Kearney (UNK), which had previously tried to recruit him under advisement of then-UNK wrestler Tervel Dlagnev, and subsequently helped the Lopers win their first-ever team title in 2008. Usman placed top three in the nation all three years he attended UNK and was a two-time national finalist. He became the NCAA Division II national champion at 174 pounds in 2010, finishing the season with a 44–1 record and 30 straight wins.

Shortly after his folkstyle career was over, Usman turned his attention to freestyle wrestling and became a resident of the United States Olympic Training Center, with hopes of making the 2012 Olympic team. Despite making the US University World Team in 2010, Usman was sidetracked by injuries and eventually abandoned his Olympic goal after failing to qualify for the 2012 US Olympic Team Trials, turning his attention to mixed martial arts instead. Former National Football League (NFL) star Christian Okoye, who has the nickname “The Nigerian Nightmare” trademarked, gave his blessing for Usman to use it.[29]

On 2011, Usman served as the wrestling coach for Team Miller in The Ultimate Fighter season fourteen. After failing to qualify for the 2012 US Olympic Team Trials in freestyle wrestling, Usan made his professional MMA debut in November 2012. He compiled a record of 5–1, competing for several regional promotions before trying out for The Ultimate Fighter in early 2015.

In February 2015, it was announced that Usman was one of the fighters selected to be on The Ultimate Fighter 21.

In the semifinals, Usman faced off against long-time veteran and former WSOF Welterweight Champion Steve Carl. He won the fight via unanimous decision and advanced to the finals.

In the finals, Usman faced Hayder Hassan on July 12, 2015, at The Ultimate Fighter 21 Finale. He won the bout via submission in the second round, thus winning a six-figure contract with the UFC. He was also awarded the Performance of the Night award.

In his official debut as a UFC athlete, Usman faced future contender Leon Edwards on December 19, 2015, at UFC on Fox 17.[39] He won the fight by unanimous decision.[40]

Usman was expected to face two-time Jiu–Jitsu World Champion Sérgio Moraes on May 14, 2016, at UFC 198.[41] However, it was announced on May 1 that Usman had pulled out of the bout for undisclosed reasons and was replaced by promotional newcomer Luan Chagas.[42]

In his first bout of the year, Usman faced Alexander Yakovlev on July 23, 2016, at UFC on Fox 20. He won the one-sided fight via unanimous decision after out-grappling Yakovlev.

A rescheduled bout with a Sérgio Moraes on a seven-match unbeaten streak eventually took place on September 16, 2017, at UFC Fight Night 116. Usman won the fight via one-punch knockout in the first round.

Usman was scheduled to face Venator FC Welterweight Champion Emil Weber Meek on December 30, 2017, at UFC 219, however, Meek presented VISA problems and the pair was rescheduled for UFC Fight Night 124.[51][52] Usman won the fight by unanimous decision after out-wrestling his opponent.[53]

Usman was expected to face Santiago Ponzinibbio on May 19, 2018, at UFC Fight Night 129. However, on April 21, Ponzinibbio was pulled from the card due to injury and replaced by ADCC Grappling World Champion and two-time UFC title challenger Demian Maia. After denying all of Maia’s fifteen attempts of takedowns and out-performing his opponent on the feet, Usman won the fight via unanimous decision.

On August 18, it was announced that Usman would serve as a back-up for the UFC 228 main event match between long-time champion Tyron Woodley and undefeated challenger Darren Till.

Usman faced former UFC Lightweight Champion Rafael dos Anjos on November 30, 2018, at The Ultimate Fighter 28 Finale. He won the fight via unanimous decision. This win earned him his second Performance of the Night award.

Riding a nine-fight winning streak in the UFC, Usman next faced UFC Welterweight Champion Tyron Woodley on March 2, 2019, in the co-main event at UFC 235. He won the one-sided fight via unanimous decision after dominating Woodley for five rounds. Usman made his first title defense and faced long-time rival Colby Covington at UFC 245 on December 14, 2019. Despite both athletes being mostly offensive wrestlers, the fight did not include any grappling and contained high-paced offense in the striking instead. After an often referred to as “slugfest”, Usman was able to knockdown his opponent twice before finishing him with strikes in the fifth round to be declared the winner via technical knockout, which set the record for the latest finish in UFC welterweight history. This fight earned both participants the Fight of the Night award.

Usman was scheduled to defend his title for the second time against long-time teammate and two-time No-Gi Jiu-Jitsu World Champion Gilbert Burns on July 12, 2020 at UFC 251.[70] Both being originally from the same camp – Sanford MMA – Usman opted to train under Trevor Wittman heading into the fight.[5] On July 3, 2020, it was revealed that Burns tested positive for COVID-19, and he was subsequently removed from the card. On July 5, 2020, it was reported that Jorge Masvidal had stepped in on short notice and served as a replacement for Burns. Usman controlled most of the uneventful fight by keeping Masvidal in the clinch, winning via unanimous decision. The card reportedly generated 1.3 million pay-per-view buys in the United States, the most since UFC 229 in October 2018.

Usman was once again scheduled to defend his title against BJJ World Champion Gilbert Burns, on December 12, 2020, at UFC 256. However, on October 5, 2020, It was reported that Usman had pulled out from the bout, citing more time needed to recover from undisclosed injuries and the bout was postponed for February 13, 2021, as the headliner for UFC 258. Usman defended his title for the third time, as he won the fight via technical knockout in the third round, surpassing the record of the former UFC Welterweight Champion Georges St-Pierre for the largest win-streak in the division with thirteen. This win earned him the Performance of the Night award.

For his fifth title bout, Usman rematched against Jorge Masvidal for the UFC Welterweight Championship on April 24, 2021, at UFC 261 in Florida. He successfully defended his title after knocking out Masvidal in the second round, becoming the first one to do so in the UFC. This win earned Usman his fourth Performance of the Night bonus award.

Usman rematched Colby Covington for the UFC Welterweight Championship on November 6, 2021 at UFC 268. Usman retained his championship, being declared the winner via unanimous decision.

Usman and his wife have a daughter, Samirah (born 2014). His father, Muhammed Nasiru Usman, who had previous convictions in Tarrant County for theft and drunk driving, was convicted in May 2010 of various offenses, including health care fraud and money laundering, related to a health care fraud scheme. He was sentenced to 15 years’ imprisonment and ordered to pay $1,300,000 in restitution, and was released from FCI Seagoville on March 16, 2021.