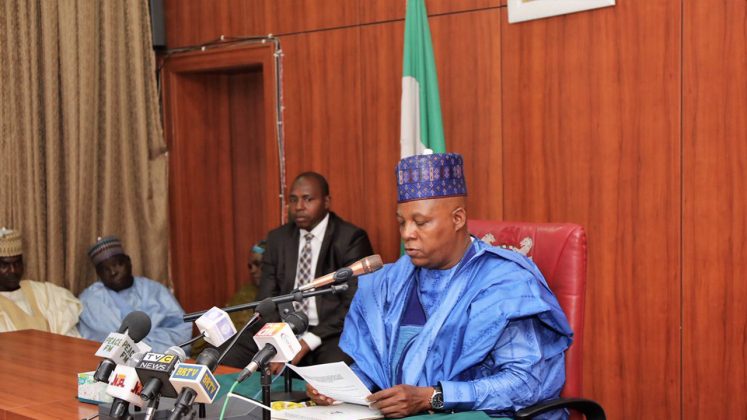 The Islamic State (ISIS) has claimed responsibility for the attack on the convoy of the Borno State governor, Kashim Shettima, on Tuesday evening. Shettima, who is contesting for a senatorial seat in this year’s general elections, was heading for a rally when the incident happened.

According to Reuters, ISIS, in a statement on its Amaq news agency, claimed that 42 people were killed in the Tuesday’s attack on the governor’s motorcade.But Shettima’s Special Adviser on Communications and Strategy, Malam Isa Gusau, who confirmed the attack in a statement issued in Maiduguri yesterday, said only three persons were killed.

The Boko Haram terrorist group has waged a decade-long insurgency in the Northeast, which has killed around 30,000 people and forced about two million to leave their homes. Islamic State West Africa Province, which split from Boko Haram in 2016, has carried out a series of attacks on military targets in the last few months.

Security sources said earlier on Wednesday that the gunmen opened fire at the motorcade transporting Governor Shettima on his way from Maiduguri to the market town of Gamboru for the rally.Meanwhile, Shettima has mourned those killed in the ambush, including political associates and supporters of All Progressives Congress (APC) as well as a soldier.

Many people who were reportedly abducted include three district heads at Logoma village in Ngala Local Government. Gusau, in the statement yesterday, revealed a plan by Governor Shettima to hold a security meeting on the attack on his convoy along Dikwa-Ngala road. According to him, the meeting is to get accurate information on the incident and to sustain the collaboration with security agencies and volunteers in the ongoing fight against Boko Haram.

“Preliminary report on Wednesday confirmed the killing of three persons during the multiple attacks. Tuesday’s ambushing was aimed at attracting local and global media attention in order to sustain the propaganda strategy.” He said the Boko Haram strategy was to instill fear in the civilians and the troops fighting insurgency in the state and the Lake Chad region.

According to Gusau, the governor, who returned on Wednesday to Maiduguri, will today also meet families of the deceased victims. He said the army and security agencies had dedicated their lives to restoring peace in the state.“For one success recorded by the insurgents, the armed forces record dozens against them,” he noted, urging the people to be calm and support the troops by sharing useful information that will help the counter-insurgency operations.