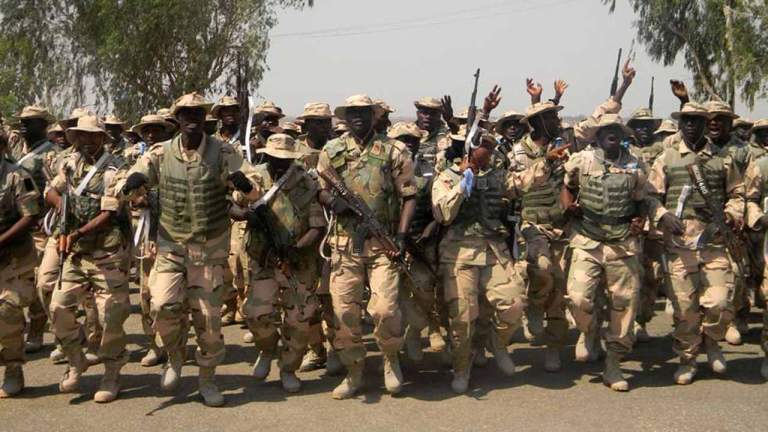 The Field Commander of the Multinational Joint Task Force (MNJTF), Chikezie Ude, a major general, on Boko Haram insurgency, said operations of the team were currently being executed by 10,250 military personnel.

He told some Nigerian journalists in N’djamena, Chad, on Friday that the number of the personnel, drawn from Nigeria, Chad, Niger and Cameroon, the four countries involved in the task force operations, rose from 7,600 in 2015.

Mr Ude, therefore, said the operations did not have challenge of personnel, adding that the size of the troops had led to the huge decimation of the insurgents in the Lake Chad Basin.

According to him, in 2015, Boko Haram was everywhere, but as at today, no place is under firm control of the insurgents in Nigeria.

The commander said with the collaboration of national military forces of member-states of the Chad Basin, the Task Force had been able to recover areas previously lost to the insurgents.

He, however, called for support of all segments of the society in the fight to eliminate terrorism in the region, saying “defeating terrorism is not a military affair alone.”

He reaffirmed the mandate of the MNJTF, saying that it is to create safe environment in the basin, to significantly reduce violence against civilians, especially women and children.

Mr Ude disclosed that 2,000 civilian casualties were recorded in the insurgency war in 2015, adding however that the number dropped to 573 in 2018.

He said security operations in the region had improved considerably, adding that MNJTF’s activities were being prosecuted in four sectors in Bakasole (Chad), Nigeria (Baga), Niger (Diffa) and Cameroon, with additional contingent from Benin Republic.

He said the forces had been integrated to respond to situations as they arose, explaining that emphasis was on “mobile operations” because of the wide expanse of land in the Lake Chad Basin.

“The task force has kept up with developments in the field, adjusting as the insurgents change strategy.

“Last week alone, we neutralized no fewer than 93 Boko Haram fighters, and this is quite encouraging. All arrested insurgents are often handed over to national forces of the areas where they are captured.”

The commander also disclosed that strategies were being evolved for the protection of liberated communities, “which number 100s, in the area because no deliberate effort for follow-ups on this’’.

He said situation had remained an issue which the countries of LCBC and the international community were trying to harmonise efforts to ensure that it was sorted out.

According to him, the civilian population in the liberated areas needs structured administration and facilities, with adequate security arrangement, to return and remain in the communities.

Mr Ude called for effective policing of border communities of contiguous nations to ensure that the terrorists did not have free movement in the areas.

He commended citizens of member-states of LCBC for their support for MNJTF and assured that the insurgency would be diminished as the offensive from the joint operations was faring well.

He added that the journey of the war was almost coming to an end, saying that with the support of the people, including the media, “the narratives will change”.

On funding for the task force, the commander said that it was the responsibility of the Lake Chad Basin Commission (LCBC), noting that it is progressing.