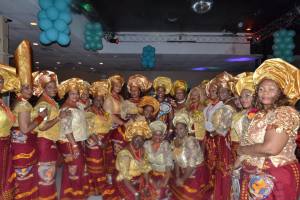 It was a show of the pomp and pageantry of fine Igbo culture as the beautiful women of the Umuada ndi Igbo in Diaspora- International movement added 49 members to their fold at their latest induction in Atlanta Georgia. Officiated by the indomitable and indefatigable women leader and founder of the movement- Lady Adaozo Chinonyelum Grace Agude, the newly inducted members were charged to uphold the dignity of Igbo womanhood and fight for what is just and right like the Aba women of old. They were also charged to uphold unity in their families and love for their husbands, children and fellow women and eschew everything that will lead to disunity within the family and our community. The occasion was witnessed by hundreds of Umuada and their supporters from around the globe including a delegation from Nigeria led by the Imo State Commissioner for Economic Planning and Development Dr. Adaora Ijezie. The occasion also witnessed the start of the launching of the “Umuada ndi Igbo- Cassava Mills Project”- a project which Lady Adaozo Agude explained will lead to the establishment of 7 cassava mills and creation of hundred of jobs in all seven Igbo speaking states in the country. Dr. Ijezie pledged the support of Imo State Government to the project through donation of land for the mill construction in Owerri.

See link below to the full Google plus album
https://goo.gl/photos/N4EgGPrd2rYJNjmr5
QUICK SHARE:

Announcing the arrival of Julius Kelenna Maduka, Son of Adanna and Jonathan Maduka