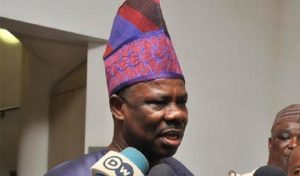 Ogun State Governor, Senator Ibikunle Amosun yesterday said he is not ready to engage the leadership of the All Progressives Congress (APC) in the media following a threat to punish him over violence that marred the APC presidential rally in Abeokuta on Monday.

The APC National Publicity Secretary, Lanre Issa-Onilu had in a statement, expressed the party’s regret over the alleged premeditated attacks on President Muhammadu Buhari and other senior party leaders purportedly sponsored by Amosun.

Issa-Onilu, who described the act as “gross misconduct,” said the party would take punitive measures against sponsors of the violence after the general elections.

However, Amosun while responding to questions from newsmen on Wednesday in Abeokuta shortly after he presented cheques of severance allowance to some past political office holders, said he would not join issue with the party.

“Do you want me to engage my party, our party on the pages of newspapers or on the national television? I won’t,” the governor responded.

Speaking on the Saturday’s election, Amosun said he expects the electorate to exercise their civic rights peacefully.

He said “My message is not different from the one I have been canvassing everyday that we should not do anything that would bring violence to Ogun state. I am sure everybody would go out and exercise their civic rights. I don’t believe there would be any violence.”