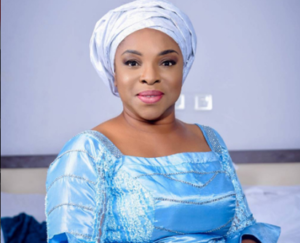 WITH a filmography of more than 40 movies, Liz Benson Ameye is a veritable fixture on cinema, video and television screens in Nigeria. She played “Mama” in the first production of “Mummy Dearest” and has reprised her role in the sequel. Though narrowly focused on set, Ameye acceded to J.K. Obatala’s intrusion, long enough to render matronly counsel on a number of pertinent issues, including “homosexuality,” “discipline” and “Old vs. New Nollywood”. Their encounter comes in the wake of the ordained minister and evangelist’s appearance in “Busted”, a highly controversial exploration of same-sex marriage, released last May. Ameye is originally from Akwa Ibom State, but she now resides in Delta State, with her evangelist husband, Bishop Great Ameye of Freedom Family Assembly.

You demurred earlier, that you don’t know how many films you’ve appeared in. After checking the internet one can see your point. There are at least 40?

It’s more than that. From the time I started, until now, it’s definitely more than 40. That’s why I told you, I’ve lost count -or rather, I’ve stopped counting.

You recently appeared in a very controversial film, entitled “Busted”. Let’s start with that. Give us an idea of what the movie was all about – and why it created such an uproar?

The film was controversial, because its subject matter is something a lot of people don’t want to talk about. You know, it’s what’s going on in a lot of homes. So, “Busted” was more or less an exposition of the sexual immorality that’s riddling our society. People are riding high on homosexuality, because they do not know the implications. Some probably do know it’s wrong. But they go ahead and do it, anyway. Others indulge in it, because they are under the influence of various substances. Even the high and mighty are involved – men going after men and women going after women. It’s not just ordinary people. Research has revealed various reasons, including ritual purposes, but it’s mostly out of ignorance and moral indiscipline. Many victims are simply unaware, of what they are getting into. In some cases, they pay dearly for their ignorance.

Yes. And then, we’re meant to be role models, you know. I think that’s why everybody’s talking about homosexuality in the film industry. Yet politicians and others, are there too. But to affirm what you’ve said: Yes, it’s widespread. And that’s just too bad.

Actress Nse Ikpe Etim (who hosted this year’s AMAA) in an interview with Vanguard said that she has no problem with homosexuality. Yet, as you’ve noted, movie stars are role models. Should stars like Etim, be endorsing sexual immorality?

The root-base of people’s opinion matters a lot. What I say, is my own opinion. All of us have the right to our opinions. I am an ordained minister of the gospel. Consequently, I have come to know things, which I did not know before now. When it comes to “morals,” I always tell people there is one who created the world – and, in doing so, set the standards for moral behaviour. I am trying to live accordingly and play the role that is accrued to me. And I will be damned if I don’t speak out!

You said, also in a recent interview, that while the Nigerian movie industry is now generating revenue, a dearth of infrastructure is hampering its growth. Explain that?

What I mean is, those who wield financial power, should know that there are so many things we need in the industry. One is structural empowerment. We need agencies and institutions, which are intensively involved in training actors, inculcating discipline into their lives and also raising public awareness of what we are about. Artistes have so many challenges. Oftentimes, we are seen in the wrong light. We have to exert a lot of effort, to make people understand what we’re doing. You know, it’s not like we’re crazy, or something! We’re just trying to be creative. So we need structures that will help garner practitioners and make them aspire to do better, in life.

Who do you think should provide this support?

Government can help, by promulgating policies that strengthen the film industry. We need policies that can protect our work and affirm us, as a stronger industry. And on an even more serious note, government can also help a lot by trumpeting our achievements to the world – by extolling the virtues of our industry abroad, more vigorously. After all, we who make movies, are putting Nigeria on a very high pedestal, globally. When government comes to fully realize this, Nigeria and the film industry will be much better off.

You are a seasoned actress. You’ve been around. What is your outlook, on this “Old Nollywood” versus “New Nollywood” thing?

All I can say, is that the wine gets better with time. You can’t cut the old and new off from each other and set them apart. They must grow together to make the industry better. I’ve always insisted, that the sky is big enough to contain as many stars as we can produce. Let no one say, “This star is taking the place of that star”. No, no, no! There’s nothing like that. You come. And you shine, in your own time and in your own season…and you remain a star. That’s what I believe.

So, the two sectors of the industry need to stop bickering. They must put their heads and their experiences together. I know the older ones have been there, and all that. But then, you know, it’s the younger practitioners that have the energy now. They also have the technological know-how. So they can bring it in – and make improvements.

There are some who’ve set the pace, who’ve made people look twice at this industry. And I happen to be one of them. Nevertheless, there are icons who were there, even before me. I acknowledge them. I give them kudos. And I think the new generation, who are coming into the industry, should do the same thing: Because you just can’t throw all that experience away.

Are you doing any directing or producing?

I auditioned for a part – and was successful. I was a member of Collective Artistes, which was under the aegis of United States Information Service (USIS). Our director was Chuck Mike.

I’ve heard the name before!

Yes. Chuck has returned to the States now. But he put Collective Artistes together; and I happened to have been involved, along with—among others—Yinka Davis. And then, I was also a member of the National Association of Nigerian Theater Arts Practitioners (NANTAP). I checked for the name of your first film.

Was it “True Confessions”?

Well, in Wikipedia’s filmography, “Glamour Girls” (1994) comes before “True Confession” (1995). “Silenced” is first on the list—but there are question marks besides it, instead of a date. No, no, no! I cannot remember the name of my first film. But it wasn’t “Silenced”. It was an Ibo language film. I had more or less a cameo role. I played an Immigration Officer. Right after that, I appeared in a major home video movie. That was “Glamour Girls”.

Let’s talk about “Mummy Dearest”. You’ve done one installment. This is the sequel.

What led to your joining the cast?

Well, I got a call from this young man—Willis Ikedum. He said he had a story he wanted me to be a part of. And I said, “O.K., send me the script”. I was pleased to learn, that “Mummy Dearest” is a family-based kind of thing, you know.

That interested me, because I’m always on the look-out for something different. So I became excited about it. He called back and fixed an appointment for us to talk. We did. And every other thing fell into place.

Do you mentor younger actors and actresses?

I used to do that lot. But, you know, the people you talk to, react in different ways. Some will take the advice, while others will be offended. Nevertheless, when my counsel is needed, I’m always there.

What was your most successful movie,the one you’re most proud of?

Well, when you put things that way … If I say that … then it means the rest of what I’ve done are not really up to par. So I’ve always keep off, from trying to single out a particular movie.

I take a story and look at the message. You know, I consider what it’s trying to put out. For me, that’s fulfilling, as an actress. Without putting anyone else down, I just don’t pigeonhole my movies, in that sense.