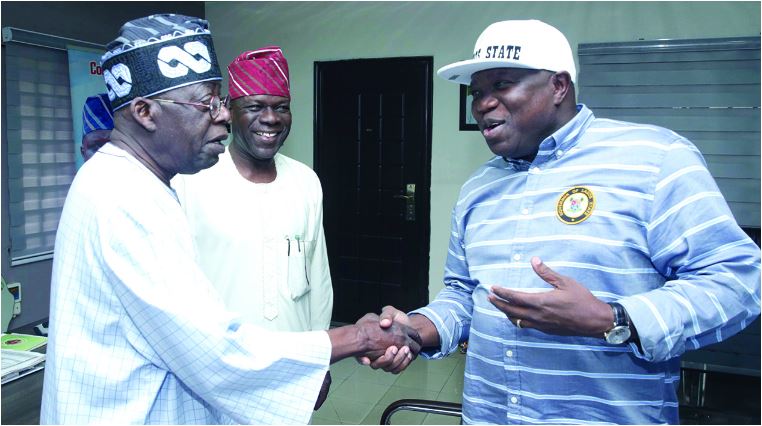 Fortune may smile on Lagos State Governor Akinwunmi Ambode as the leadership of the All Progressives Congress (APC) steps up pressure on National Leader Bola Tinubu to back the incumbent’s re-election.The duo has been at loggerheads, with Tinubu supporting a former Commissioner for Commerce and Industry, Mr. Babajide Sanwo-Olu, ahead of the September 29 primary to select the party’s flag-bearer.

Sanwo-Olu reportedly has the nod of the powerful Mandate Group, which is loyal to Tinubu.But indications that the crisis might be resolved in favour of Ambode became apparent following a meeting attended by President Muhammadu Buhari and some APC governors on Tuesday.

This was at the mega rally for Alhaji Gboyega Oyetola, APC’s aspirant in Saturday’s Osun State gubernatorial election. The party’s leadership was said to have pleaded with Tinubu to let go of his grievances and allow Ambode return for a second term.It was learnt that former governors of Osun and Ogun States, Chief Bisi Akande and Aremo Segun Osoba, started the peace overture, as they led Ambode to entreat the national leader.

The move might have been pre-planned, as Ambode rarely attends such occasions. His appearance in Osogbo, alongside his wife Bolanle, therefore gave rise to this suspicion. Sources said Tinubu, out of respect for Akande and Osoba, promised to let pass his grouse. But with a condition: his political loyalists in Lagos, who have made up their minds that Ambode must go, must be consulted.

The two advocates then led the incumbent to Osun State Governor Rauf Aregbesola, who is perhaps the closest loyalist of Tinubu. On the advice of the former governors, Ambode was said to have prostrated pleadingly, while the Osun governor expressed his grudges and those of Lagos party members. He also explained why the members insisted they wanted Ambode out.

One of the sins Aregbesola noted was Ambode’s alleged moves to destroy his (Aregbesola’s) political structure in Lagos West, especially in Alimosho. He said Ambode kept him waiting for several hours when he visited the Lagos government house. He further accused Ambode of vindictiveness towards party members that aided his emergence as governor in 2015. Aregbesola however reportedly promised Akande and Osoba that he would look into the matter.

At the meeting with Buhari and the APC governors, sources said Kebbi State Governor Abubakar Atiku Bagudu led the plea with Tinubu. “It is not in the culture of Hausa people to prostrate. What we normally do is express respect to our elders or leaders by saying Ranka Dade. But today, I am going to break that protocol,” he reportedly said, and prostrated.

Unable to hold his emotions, the national leader burst into tears, at which point, Buhari stood up, moved closer to Tinubu, and implored him to give Ambode a second chance.Consequently, Tinubu called for a meeting of the Governors Advisory Council (GAC) to hold yesterday, the outcome of which would determine the incumbent’s fate.

Before the Osogbo meeting, pointers that the crisis could be resolved in Ambode’s favour were already in the public domain, as some APC members cautioned that the party could be stretching its luck too far, if it denies the incumbent a ticket.Another signal a resolution would be struck before next week’s primary was yesterday’s return by contractors to some road project sites in the state. Work had stopped as soon as news broke that Tinubu wasn’t backing Ambode.

The Guardian could not reach Akande or Osoba to confirm their role in resolving the matter. Also, the party’s spokesman in Lagos, Mr. Joe Igbokwe, confirmed that the GAC meeting would hold but denied knowledge of the Osun peace parley.But Mr. Tayo Ayinde, the director general of the Babajide Sanwo-Olu Campaign Organisation, said there had not been any resolution, stressing that his principal was not ready to step down for anybody.

“It is the party and not Tinubu that said other aspirants should contest the governorship ticket. There is no iota of truth in the narrative that APC governors and President Buhari prevailed on Tinubu to reverse the decision. There is no going back on the Sanwo-Olu ambition. The national leader did not instruct us to back out and he wouldn’t even say so because it is a party affair, not individual. My aspirant is going ahead to participate in the direct primary,” Ayinde said.

Meanwhile, the Lagos chapter of Abundant Nigeria Renewal Party (ANRP) has expressed readiness to offer Ambode a ticket, if he is sidelined by the APC.In a related development, the 2015 governorship candidate of the Peoples Democratic Party (PDP) in Lagos, Mr. Jimi Agbaje, yesterday declared his desire to contest next year’s election.

He told The Guardian that he hoped the PDP would take advantage of the crisis in the APC to win the poll. Twenty years of the APC ruling in Lagos is enough, “the party must be shown the way out next year,” he said. He further denied crisis in the state PDP chapter, saying the party remains unruffled despite the defection of its immediate past state chairman, Mr. Moshood Salvador.