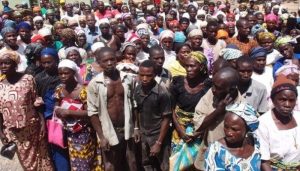 After decades of Nigeria’s decadence as a country, there seems to be a silver lining on the horizon. The prospect of Nigeria being redirected on the right trajectory has never been so real and imminent.
For over 60 years of her independence, Nigeria’s growth has been stunted and haunted with nation-building, which has remained so illusive due to her irresponsible, selfish, greedy and irrational leaders.
As a result, chaos have reigned; break-down of law and order, corruption, nepotism, tribalism, high levels of emigration/brain drain, high poverty levels, bad governance and very gloomy future. Even the poor that have cringed to religion have been mercilessly duped by their spiritual mentors. It has been a dog eat dog world.
However, the amazing thing is that even with all these problems, majority of Nigerians have remained “faithful and hopeful” that one day, God would heal the land and restore normalcy.
What is faith? According to Wikipedia “Faith is derived from the Latin word “fides” and Old French word “feid”, is a confidence or trust in a person, thing, or concept. In the context of religion, one can define faith as “belief in God or in the doctrines or teachings of religion”.
Faith could also be described as the substance or assurance of things we hope for, but have not yet received.
What is hope? Hope is a feeling of expectation and desire for a certain thing to happen. According to Desmond Tutu,  “Hope is being able to see that there is light despite all of the darkness.” In the words of Bernard Williams,  “there is never a night or a problem that could defeat sunrise or hope.”
So for all these years, most Nigerians have barely survived on hope and faith. Faith affirmed their belief that one day everything would be alright, while hope filled up the holes of frustration in their hearts. In the words of William Shakespeare, the miserable have no other medicine but only hope, and that’s true for most Nigerians since independence. Today, life in Nigeria seems to have become so stretched and difficult that even hope and faith have become a farce. For years after the civil war, Nigeria has always been at the precipice of total disintegration but has managed to survive, albeit comatose, and that’s until Dr Peter Obi (PO) arrived the scene.
To so many people; which include but not limited to Nigerians that can’t find good paying jobs, the elite, business men, people in stark poverty, or Diaspora Nigerians that can’t travel home due to insecurity, it seems like the heavens finally heard their cries of a better Nigeria…could it be that it is now Nigeria’s turn to be saved?
This writer in his life time has never seen this kind of agitation for freedom as shown by the majority of Nigerians in support of PO. In Peter Obi, there seems to be a supernatural belief that God has answered their prayers. In Peter Obi, majority of Nigerians believe their hope and faith have finally materialized. For most Nigerians, PO has been sent by God to rescue Nigeria, and they take it both seriously and religiously.
PO reminds this writer of Jesus the Christ days while on earth. (JOHN 6:15 15), Then Jesus, knowing that the people were about to come and take Him by force to make Him king, withdrew again to the mountain by Himself alone. The one million Naira question then arises, Why did the crowd want to take Him by force and make him king”? The answer is simple, to lead a rebellion and free them from the Romans bondage, as their ancestors had been freed from bondage under the Egyptians.
So, it wouldn’t hurt to reason that the Jews were in the same predicament as today’s Nigerians and so when they saw Peter, heard his life’s story, they shed tears of joy and became Obidients. They have been so subjugated for too long that they knew a genuine leader when they saw him and he has since assumed a messianic figure for them.
Obidients are majority of Nigerians living within and outside Nigeria that believe in the principles of good governance and better Nigeria, but with special hope that PO as a messianic figure would help free them from their current bondage.
Therefore with this mindset, it has become a movement, and a way of life for a better Nigeria. Even PO cannot change his mind because the people might either lynch him or forcibly make him president even without an election.
This writer has never seen a phenomenon as this. The Obidient movement is beyond PO and Datti, but has become the collective will of Nigerians to change their narrative for a better life. Obidients see PO as their last hope for survival and may kill to realize it.
The defective thinking that some people seem to entertain is that the Obidient movement is not rooted, and people that “practicalize” such assumptions have been pummeled into oblivion by the Obidients even if PO doesn’t like it.
This is because not only that PO could no longer control this movement but also the fact that he no longer has a choice of backing out. Whether he likes it or not, the people have already made him king. To these Nigerians, being Obidient means “hope, prayer and faith” realized.
It also means end of corruption, end of insecurity, end of chaos, end of embezzlement, end of nepotism, end godfatherism, end of tribalism, and the start of a new and better Nigeria.
After decades of Nigeria’s decadence as a country, finally there is a silver lining on the cloud, and anyone with common sense sees it.
This is like a biblical flood that consumes anything on its path, and in that condition, the safest place is on the higher ground with Peter.   Has God sent Peter as a Messiah
to Rescue Nigerians from Bondage?
Join the movement.
Arinzechukwu
QUICK SHARE: