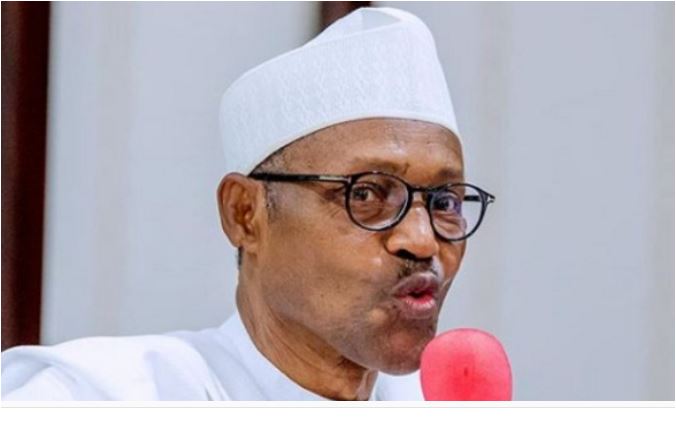 President Muhammadu Buhari on Monday advised the Peoples Democratic Party and other parties that were not satisfied with the results of governorship elections in Kogi and Bayelsa states to seek redress in court.

Buhari gave this advice shortly after the Independent National Electoral Commission declared the Kogi State Governor and candidate of the All Progressives Congress, Yahaya Bello,  winner of the Saturday governorship election in the state.

The APC candidate in Bayelsa State, David Lyon, had on Sunday won the governorship poll in the state. Lyon polled 352,552 votes to defeat his closest rival, Senator Duoye Diri of the Peoples Democratic Party, who got 143,172 votes.

Buhari, in a statement by his media aide, Femi Adesina, congratulated  Bello and  Lyon, for winning Saturday’s governorship polls.

While he described Lyon’s victory as “impressive”, the President said Bello’s election was “a race well run and a victory well won.” Buhari asked those who were not happy with the outcome of the polls in the two states to go to court to seek redress.

The President commended the APC and the people of the states, who exercised their civic rights in a peaceful manner, “notwithstanding the pockets of unrest recorded in some locations.”

He stated, ‘Violence during elections vitiates our commitment to demonstrate to the world and upcoming generation that we are a people capable of electing leaders in a peaceful and orderly manner”, the statement quoted him as saying.

It added, “He notes that while officials of the Independent National Electoral Commission and security agencies did their best within the ambit of the law to ensure free, fair and credible elections, it is unfortunate that pockets of unrest, mostly sponsored by desperate politicians, were recorded during the polls.

“The President looks forward to working with the incoming government to improve the lives of the people in Bayelsa State, while ensuring the security of lives and property of all citizens.

“President Buhari urges the Governor-elect, Lyon, to carry other divergent interests along in the next phase of governance, imploring those not satisfied with the outcome of the polls to seek redress through the constitutionally established channels.”

Buhari also noted that in Kogi, Bello ran a good race and won it well. “The President describes the election and emergence of the APC candidate in Kogi State as “a race well run and a victory well won.” He condoled with families of those who lost their loved ones during the election in Kogi.

Buhari said, “President Buhari urges Governor Bello to see his renewed mandate as another opportunity to build on the foundation already laid towards improving the lives of the people of Kogi State.

Announcement of the result was put on hold on Sunday after results in 19 out of 21 council areas were released by INEC. The commission said that it  was still awaiting results from Lokoja and Ibaji council areas. It added the result from Dekina  needed  clarifications.

After announcing the remaining results of the polls at INEC office in Lokoja on Monday, returning officer, Prof Ibrahim Umar, said Bello had 406,222 votes to defeat his closest rival, Musa Wada, who polled 189,704 votes.

Umar said, “Bello Yahaya, having scored the highest number of votes is hereby declared the winner and therefore returned.”

But after the announcement,  the PDP agent refused to sign the results declared by INEC. The party had on Sunday dissociated itself from the results with Wada, alleging irregularities, voters’ intimidation by the APC thugs, and statewide violence during the conduct of the polls.

It was a war, not election – Wada

But the PDP candidate, Wada, at a press conference in Abuja on Monday, said he had rejected the results. He stated, “It is clear to  all that there was no election on Saturday, November 16th, 2019 but a declaration and execution of war against the people.

“What happened in Kogi was an organised war against democracy; a coup against the people and seizure of power through brigandage and the barrel of the gun with members of the police and other security agencies coordinating the stealing of the people’s votes.”

He also alleged that police helicopters were used to attack polling units, fire tear gas at voters and provide cover to suspected  APC hoodlums and policemen who allegedly brutalized the people of Kogi State and stole their mandate.

Wada said, “The APC turned our state into a theatre of war. No fewer than nine innocent Nigerians were killed. Many more were maimed and injured by the APC in their desperation to seize power at all costs.

“It is therefore distressing that INEC went ahead with a shameful collation and declaration of fabricated results despite the glaring disruptions that characterized the shambolic exercise.

“In order to achieve this ignoble goal, INEC cancelled our votes in areas of our stronghold, subtracted from our votes in many other areas and padded the votes of the APC to give a semblance of victory for APC.

“Above all, the INEC Chairman, Prof. Mahmood Yakubu, and the Inspector-General of Police, Mohammed Adamu, will surely account to God and the people for the roles they played in this election; if not in this world, then certainly in the hereafter.

“We therefore call on all Nigerians to stand with the people of Kogi State at this trying time in their quest for the restoration of their mandate in this election.”

But  the Presidency called on the PDP to accept the outcome of Saturday’s governorship polls in Bayelsa and Kogi states with grace.

It said, “Predictably, we have seen the accusation of fabricated results from the opposition Peoples Democratic Party, the PDP. Yet, the only fabrication is PDP’s conduct.

To PDP, election is good when it wins – Presidency

“It has now become standard procedure for the party to challenge any poll that does not return its candidates.  An election is good when the PDP wins. The opposite is the case if any party other than the PDP wins.

“Democracy is not only about who wins or who loses, but also about the process. In disparaging every unfavourable result, they disgrace themselves by casting aspersions on the entire system”, a statement by the Senior Special Assistant to the President, Mr Garba Shehu, said.

It recalled that the APC accepted the loss of five state governorship seats in February with grace and advised the PDP to take after the example.

The Presidency added, “The February 2019 election saw the loss of five APC governors’ seats. The government accepted the results. In doing so, we realised that we did not win the argument in those contests, and so we didn’t win enough votes.

“We retired to assess what went wrong were we responsive enough to the electorate’s needs and priorities? How can we improve on speaking to the nation’s hopes? We got ready and prepared ourselves well for the next contest. The result is a healthier, more rigorous election.

In rejecting the results as PDP has done, this reflection does not happen. Instead, the electorate get mudslinging. Improvement is not sought, but cries of victimisation; this is not an atmosphere in which democratic debate can thrive.

“Opposition strategy of attacking the electoral commission, security agencies, government at the centre and the person of President Muhammadu Buhari after each election loss is antithetical to healthy democratic norms. Candidates and parties, especially those that have lost, are not told to examine their campaign tactics and strategies with a view to improving their chances for the next election. The result of not doing this is a loss for the electorate and for the parties concerned.

“We call on the APC supporters to show dignity in victory, and for all Nigerians to remain peaceful in the wake of these elections. We call on the PDP to learn to be democrats. We must now come together to build a brighter future for Nigeria.”

The PDP National Publicity Secretary, Mr. Kola Ologbondiyan, in an interview with one of our correspondents said Buhari’s position that there were only pockets of violence was incorrect.

He said in Kogi, the election was turned into a war zone, adding that in Bayelsa State, the military aided those who unleashed mayhem on the electorate.

He said INEC  failed Nigerians adding that the commission conducted shambolic elections in both states.

Ologbondiyan said, “It is strange that Mr President commended the theatre of war that occurred in Kogi State, but we believe as a party that the elections were sham and that the INEC Chairman has once failed Nigerians and all he needs to do is to bow out.

The APC  in a statement by its National Publicity Secretary, Lanre Issa-Onilu, said it was delighted that the good people of the state ignored the propaganda and clannish campaigns of the opposition and reelected Bello.

It added, “Although the Independent National Electoral Commission has declared the senatorial election in Kogi West district inconclusive, we are confident that when the supplementary election is held, our candidate, Senator Smart Adeyemi, will reclaim his earlier stolen mandate.

“Our party’s victory in Bayelsa State is even more of a landmark. Against all odds and in defiance of the established but retrogressive political order since 1999, Bayelsans decided through their votes to overwhelmingly elect our governorship candidate, David Lyon.

“Bayelsans decided to ditch the disastrous regime of the Peoples Democratic Party and pitch their tent with a progressive platform. This a sacred trust our candidate and party will not take for granted.”

The APC thanked President Muhammadu Buhari, Vice President Yemi Osinbajo, their wives, governors and other party leaders for their support to its candidates.

“We dedicate our party’s election successes to the good people of the two states, with a solemn promise that our victorious candidates would justify the confidence reposed in them.”

The APC however admitted that much remained to be done in ensuring the sanctity of “electioneering, particularly partisan approach to elections.”

It added, “The PDP must begin to address itself to the new reality that votes are beginning to count. PDP’s retrogressive tactics of massive thumb-printing, ballot box snatching, vote buying, thuggery, violence and other illegal schemes will no longer win elections for them.”

Commenting on his victory,   Bello sympathized with the families of those who lost their lives.

He dedicated his victory to his mother, saying she played a vital role in his quest for the governorship seat.

The governor assured the people that he would never go back from his campaign promises, adding that the victory would inspire him and his Deputy, Edward Onoja, to do more.

Meanwhile, the National Chairman of the APC, Mr Adams Oshiomhole; the Chairman of the Progressives APC Governors’ Forum, Atiku Bagudu,; Governor of Jigawa State, Mr Abubakar Badaru, and the Governor-elect of Bayelsa State, Mr David Lyon, paid a visit to the President  on Monday.

The governors and Lyon were much excited over the  “popularity” of the APC’s candidate in Bayelsa, especially the reported support he got from former President Goodluck Jonathan, a member of the opposition Peoples Democratic Party, to win the polls.

They spoke with State House correspondents after the meeting with Buhari ended. Oshiomhole, who was the first to speak, said Lyon enjoyed support in Bayelsa across the state and beyond the APC.

“The candidate attracted support across the state; he had support beyond the APC family. The President is very happy about the outcome of the election,” he said.