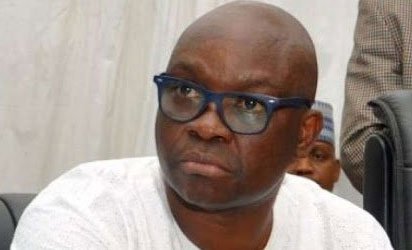 There is tension in Oke Ako and Irele communities in Ikole local government area of Ekiti State following the alleged killing of a Fulani herdsman on Monday.

The herdsman, whose name was given as Babuba Dengi, was killed in a bush between the two communities by settlers suspected to be Benue State indigenes.

‎The incident forced the state Governor, Ayo Fayose, to summon a meeting on Tuesday night at the Government House in Ado Ekiti, where he warned farmers and herdsmen against turning the state to a “war zone.”

The governor has given a marching order to security agencies in the state to fish out the killers of the herdsman and bring them to justice.

Fayose warned that there is no room for the killing of Fulani herdsmen or farmers or anybody in the state, saying “recent steps taken by his administration to prevent violence between farmers and herdsmen do not give anybody license to unlawfully take human’s life.”

The governor spoke during a meeting with Fulani herdsmen under the aegis of Miyetti Allah Cattle Breeders Association of Nigeria, farmers, local hunters, security agencies and representatives of the Tiv community in the state.

Fayose said: “I can’t accept anybody to be killed. If anybody killed anyone I will make sure you are killed by ensuring justice. I’m sad about the killing in Benue but we don’t want brutality in Ekiti.

“I won’t accept any killing here, the only thing acceptable here is peace. I therefore plead with everybody to cooperate with us.”

“I want peace in my state and everybody living here is from Ekiti whether you are Fulani, Tiv, Yoruba or anybody.

“The cow matter can’t cause problem between us. Oke Ako-Irele issue should not be allowed to fester. Cooperate with us and whoever kills would be fished out.

“When you are entering Ekiti, drop wherever you are coming from at the boundary. You can’t kill Yoruba, Fulani, Igbo or Tiv here.

“From information so far, the deceased died as a result of clash between Fulani herdsmen and some Tiv people, but at that we can’t condone lawlessness. We don’t want that type of Benue issue here.”

A communique read by Fayose at the end of the meeting summoned leaders of the herdsmen, farmers, hunters, council chairmen and traditional rulers from Oke Ako and Irele to an expanded meeting.

The meeting while noting that the problem in Oke Ako was between Tivs and Fulani, resolved that the people must live in peace.

The meeting also ordered security agencies to fish out the killers of the herdsman in the area.