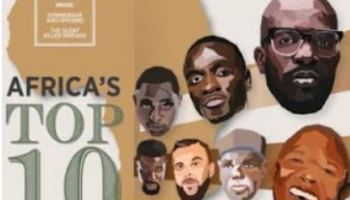 The recent list of Forbes Africa’s richest entertainers was released last month with the top ten artistes listed according to their net worth.

Surprisingly, the list which was topped by Senegalese entertainer Akon took an interesting turn when Nigerian artiste Davido came number 8 behind his counterpart Wizkid who was number 7 according to the ratings.

Nigerians however think there could be a little flaw in the ratings of Forbes considering the fact Davido clearly outshines Wizkid in some of the listed factors.

Asides the fact that Davido was born into old money, he has never ceased to inform his fans of the status of his account, something Wizkid is not fond of doing.

Still there is the notion that Davido would be far richer than Wizkid. Could the notion be wrong or is Forbes wrong here?

Note also that Davido has the biggest social media presence and fan base amongst all Nigerian stars with close to 6million followers on Instagram alone, a height his friend, Wizkid has not attained.

Well, as far as investments and account status are concerned, it is difficult to say who has more, only that Davido is believed to be richer than Starboy-apparently, we were wrong.