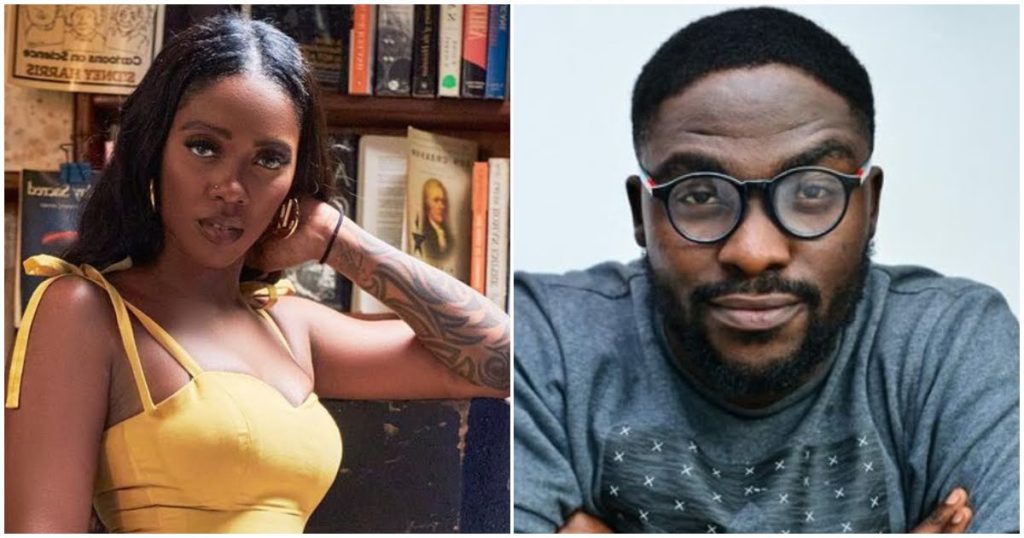 Top Nigerian artiste, Tiwa Savage has taken to her social media handle to react to a journalist identified as Motolani who did a music review about her Celia album and described her brand as struggling.

The article titled “Tiwa Savage’s struggling brand and her hilarious endorsement of ‘Mungo Parking’” was published by Motolani after TIME Magazine named the singer’s recent album as one of the 10 best albums of 2020. 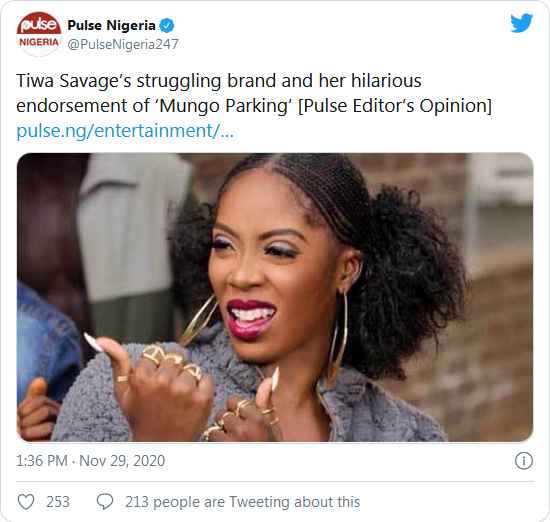 “In the wake of @TiwaSavage’s inclusion on @TIME’s list of the best albums of 2020 and the twitter storm she created, it feels like the right time for this opinion piece on her brand and the larger issue of ‘Mungo Parking’.” 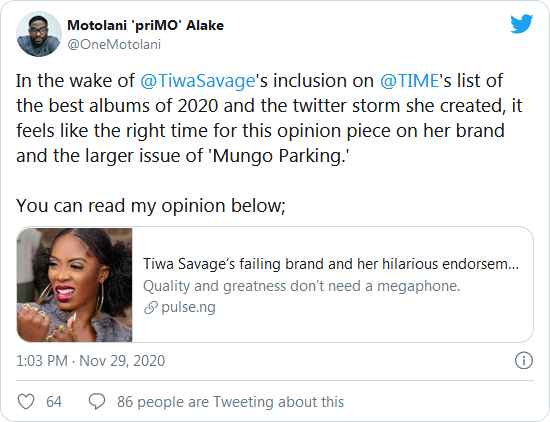 In the article, Motolani described Tiwa’s recent inclusion in UK Time Magazine’s Best 10 Albums of 2020 as “Mungo Parking”, a term which means a feat achieved through “Paid promotion, misinformation and/or ignorance”.

Angered by the Editorial written by Motolani and published by Pulse, Tiwa Savage took to Twitter to call out the journalist and his media house.

According to her, what the Nigerian journalist wrote was pure evil.

I’m glad you know it’s YOU guys I was talking about.

“Because say I quiet no mean say I be fool” – don’t try and turn nigerian media against me to hide your guilty conscience. Ask all the media houses I have great relationships with them. What you did with this is pure EVIL.

She slammed Motolani by letting him know that her little son Jamal has made more money than him and the entire company he works for.

“you know how to diss out but you no fit take am when someone speaks up. Struggling brand ke. Even my son bagged more money than your whole company @OneMotolani @PulseNigeria247” she had tweeted.

Dragging him further, she reminded her of when he first came to interview her in her house and begged for a picture.

“Guy you came to my house to do interview then you asked for pictures. Bitch you are a fan. fuck you @onemotolani ” Tiwa Savage tweeted as she continued to drag him.