It has happened! Nigerian celebrities have now become certified trolls. More than just being victims of those who take pleasure in insulting famous individuals, they have now taken to trolling themselves, and this was all because of one person: Anthony Joshua. Recently, the British boxer was attacked by another athlete and this stirred Nigerian stars from their hideouts. The boxer named Jarrell Miller challenged Anthony Joshua to a fight.

In publicising about it, Jarrell took to his Instagram page to share a video of himself meeting up with the British boxer. In the video, he was seen shoving Anthony Joshua and violently attacking him. Not only did he threaten to beat Anthony up, he also exchanged tough words with him.

Throughout the nasty dialogue, the British boxer remained cool and saved his energy. Alongside the video he shared, Jarrell also wrote some words that were meant to intimidate his opponent. He had this to say: “I’m coming FOR your HEART Your SOUL . This is MY LIFE AND YOU HOLD ALL THE KEYS TO THE Door. YOUR HEAD IS MINES #iwantallthesmoke #bigbabymiller… as the contract is sign your golden Goose is cooked. English muffin will be serve.

One thing Jarrell Miller might have forgotten while ranting about his ability to beat Anthony Joshua was that the British boxer had Nigerian blood flowing in his veins, and as it is always said, ‘Nigerians no dey carry last

Against this backdrop, several Nigerian celebrities took to Jarrell’s page to whip him with their words. Even more, several prominent celebrities like Davido, Don Jazzy, Patoranking, Ushbebe, Sam Klef, Tunde Ednut and the rest took to thrashing the boxer.

I’m coming FOR your HEART Your SOUL . This is MY LIFE AND YOU HOLD ALL THE KEYS TO THE Door. YOUR HEAD IS MINES #iwantallthesmoke #bigbabymiller Watchmework @bigbabypromotionss. I told @eddiehearn soon as the contract is sign your golden Goose is cooked. English muffin will be serve

Not only did they assure him that he will be beaten by Anthony Joshua, they also insulted him in every way they could. See their comments below: Davido, Don Jazzy and other celebrities come for Jarrell Miller after he shoved Anthony Joshua. 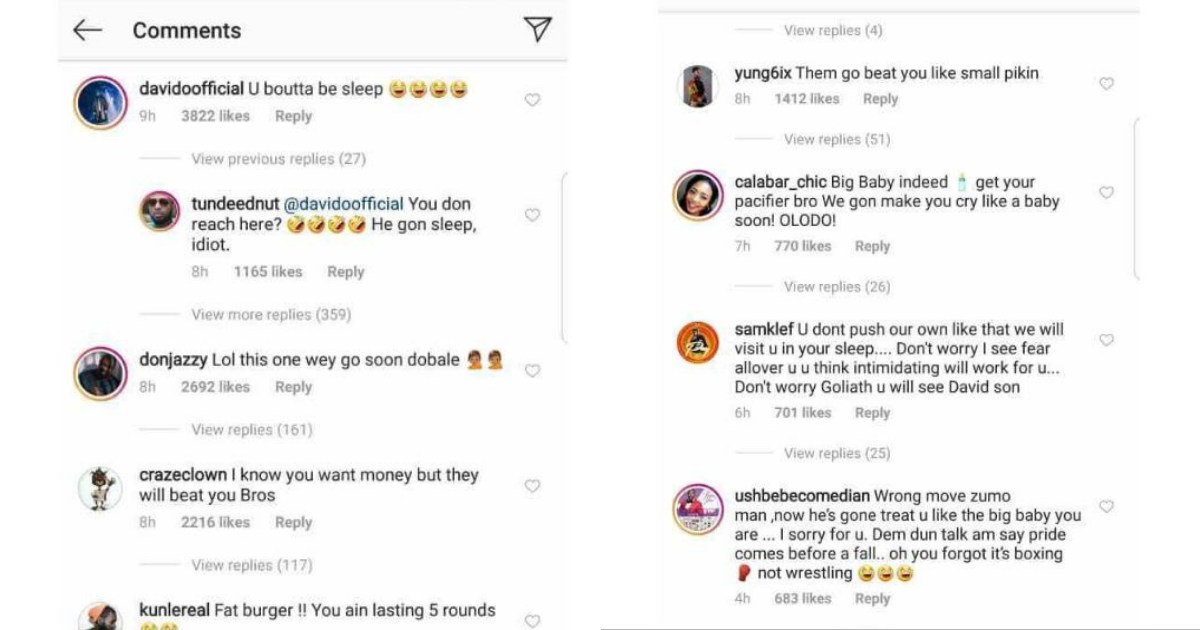 In the meanwhile, Anthony Joshua recently took to visiting his boxing fans and presenting them with gifts. It is no wonder that he is so loved among many people.