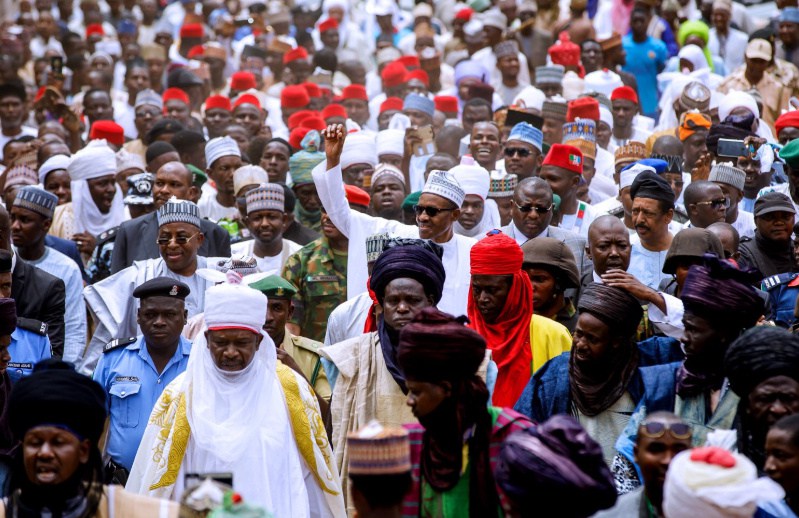 Nigerians reacted with anger and caution Thursday over President Buhari’s swift visit to Bauchi after a fire incident there, questioning his long refusal to meet and commiserate with hundreds of victims and families of rampant killings and disasters across the country.

A day after signing the 2018 budget, the president flew to Bauchi to sympathise with victims of last weekend’s windstorm and fire disasters in the state, his office said.

But the news reignited criticisms that for months trailed the president’s often lukewarm response to multiple incidents of violence in various states of the country.

Since coming to office in 2015, Mr Buhari has been widely criticised for his reluctance to respond to Nigerians who have suffered loss of properties or loved ones to deadly violence and even disasters.

In 2016 for instance, the president was condemned for his apparent reluctance to commiserate with victims of killings in Agatu, Benue state, which remains one of Nigeria’s deadliest cases of violence in recent years.

At least 500 people were killed when suspected herdsmen unleashed terror on villages between February ending and early March of that year. The president initially kept mum, but later released a statement to commiserate with the victims.

A few weeks later in late April, Nimbo in Enugu state came under suspected herdsmen attack, with at least a dozen people killed.

The president was criticised for not immediately sympathising with the victims, especially after his minister of interior released a statement absolving herdsmen of blame. Like Agatu, the president did not visit the victims at Nimbo.

Between October 2015 and mid-2016, hundreds were also killed in southern Kaduna. Mr Buhari was mum for the most part of the attacks, and did not also visit the area despite its close proximity to Abuja.

When suspected herdsmen again laid siege to Benue villages and carried out killings following the passage of the anti-open grazing law there, Mr Buhari did not visit for several months.

Rather than visit, top administration officials argued over the identities of the killers and also suggested the controversial implementation of grazing reserves in the state as a way of ending the violence.

It was in March that the president later visited the state, after relentless calls and allegations of heartlessness against him.

In Bauchi, at least eight people were confirmed killed and 120 others injured during windstorm in the state capital on Saturday. Also, more than 1500 houses were destroyed during the incident.

On Sunday, a fire outbreak at the Azare Central Market in Katagum Local Government Area of the state, destroying about 800 shops and goods running into several millions of naira.

On Tuesday, Mr Buhari sent an advance team of minister of education, Adamu Adamu, and the head of National Emergency Management Agency (NEMA), Mustapha Maihaja, to visit state and undertake an assessment of the damage caused by both disasters.

Relief materials were also promptly disbursed to those affected by the windstorm and fire outbreak.

“Nigerians stand in solidarity with their fellow countrymen in this difficult time as they face the devastation with courage and fortitude. As a fellow human being, I understand your pains and inconveniences as you struggle to pick up the pieces and rebuild your lost houses, schools, markets and places of worship,” Mr Buhari had said in a statement released by his media aide, Garba Shehu.

Surprisingly, on Thursday Mr Buhari decided to personally visit the victims of the disasters. On arrival, he was welcomed by the governor of the state, Muhammed Abubakar and the speaker of the state’s House of Assembly, Kawuwa Damina.

Some Nigerians suggested Mr Buhari’s new display of empathy is only a ploy to endear himself to voters as election season approaches.

“The fact that 2019 election is around the corner is insensitive for president Muhammadu Buhari to start up all of a sudden to do the things he should have done the very first year he came into power to ensure that many things that have happened or are happening especially deteriorating state of security in the country don’t get to happen,” Aisha Yesufu, a co-convener of the Bring Back Our Girls (BBOG) group, told PREMIUM TIMES.

She said while the Bauchi visit was commendable, the president should go further and visit other areas that suffered disasters or violence. But she then warned voters not to be deceived by the president’s gestures.

“It is good that he has been in Bauchi, that is what citizens are asking for: to get that empathy from the president, but at the same time, he needs to understand that Zamfara is bleeding badly, all the other states are there and are waiting for him and it is not to just to visit the Government House and go back home, is to indeed go out there and visit the people.

“On the part of the people I’d say, people should not be deceived President Buhari has shown himself for who he is. All he cares about are the pecks of power, all he cares about is the enjoyment he gets to have in Aso Villa and definitely not governance. So, because of that you will see things happen and there will be silence from the president. Whatever he is doing now we would appreciate it for the fact that it is being done but we should wisen up towards 2019,” she said.

Asked whether meant the president had changed, he responded: “Which change? Which change? Can Buhari ever change? He is desperately looking for votes.”

However, others said the president’s visit to Bauchi could be as a result of his improved health. Mr Buhari had received treatments for an undisclosed illness, mostly London, intermittently in the last three years.

Malachy Ugwumadu, who leads the Committee for the Defence of Human Rights, CDHR, also said Mr Buhari should not relent on his new-found vigour. He said the president should also visit other places in the country.

“Since it seems that Mr President is fast recovering and regaining his strength, he should do well to extend the same invitation to other areas of national disasters where it has occurred from the South West to the South East to other parts of the country. He should show serious commitment to what seem to be political moves,” he said.

Aminu Gamawa, a supporter of President Buhari, said the president had been hampered from visiting troubled spots in the country by ill-health as well as bad advice.

He, however, said he was happy that the president agreed to visit Bauchi, saying it was the display of such empathy the president was elected in the first place.

He, however, said he hoped the president has changed indeed and not doing this because the election season is around the corner.

“But now that he is healthier and also because it is an election year, I think he is becoming more responsive. This is what a leader should do from day one and this is what endears leaders among their followers. Unfortunately, we haven’t seen this in the past. I think gradually we are seeing that. We hope it is not just for the purpose of the election because a leader is not one who thinks about the next election but of the future and the next generation.

“For me as someone who supported the president, I think I am happy to see that he is now identifying with the people. We hope this not just an election gimmick but something that will continue to happen not only for the people of Bauchi but for all people across the country. Leadership is about identifying with people who elect you. This is a simple gesture, but I can assure you that it would remind his supporters, of course Bauchi is one of his stronghold, that he hasn’t forgotten about them,” he added.