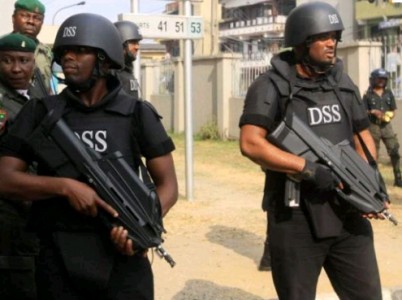 The Department of State Services (DSS) says it has arrested, in Kukuntu village, Gwagwalada, Abuja, two Islamic State of Iraq and Syria (ISIS) commanders based in West Africa.

According to the DSS, the names of the suspects are Rufai Sajo and Bashiru Adams.

The ntoice of the arrest comes days after SaharaReporters revealed that the Federal Government had alerted the Nigerian Civil Aviation Authority (NCAA), the Federal Airports Authority of Nigeria (FAAN) and the Nigeria Customs Service (NCS) of the threat by ISIS to attack commercial flights into and out of the country, and “bring bloodshed to the skies”.

FAAN subsequently said it had tightened security around main airports in the country as a result of the report.

Yakubu said the FAAN Aviation Secuirty (AVSEC) was joining hands with other security agencies to keep guard on perimeter fence, the cargo area, the runway and other restricted areas.

According to a DSS statement issued by Tony Opuiyo on Thursday, the suspects were arrested back on May 5 after special operations on identified targets.

Opuiyo said that in a related operation on April 28, the service also arrested one Umar Dogo, a suspected member of Islamic State West AFrica (ISWA) at Muda Lawal Market in Bauchi.

He said the suspects were discovered to have concluded plans to perpetuate the ideals of the group in the area and, in collaboration with Boko Haram, carry out heinous violent attacks on innocent persons.

He said two other members of Boko Haram, Mohammed Saleh, aka Azrak and Iliyasu Abubakar, aka Ruwa, were also arrested on April 12 and 19 at Gassol and Ardo local government areas of Taraba.

Opuiyo said in furtherance of the service`s operation, two members of the dreaded Basalube kidnap group, Usman, aka Siddi and Ibrahim Muhammed, aka Ganaja, were arrested on June 17 at Karu village in Abuja.

He said that on March 27, the service also arrested five members of a kidnap syndicate at Calabar.