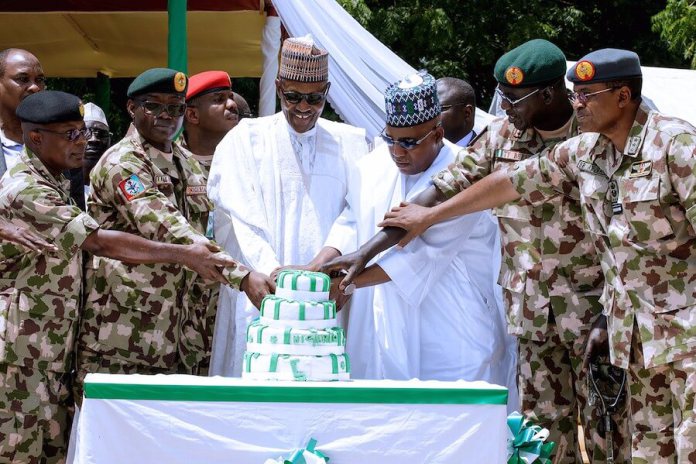 President Muhammadu Buhari yesterday warned members of the Armed Forces in Maiduguri, the Borno State capital, to take their responsibility of defending the nation’s territorial integrity seriously or have themselves to blame.

The president had for the first time put off the yearly independence anniversary ceremonies in Abuja and headed for Maiduguri to join the troops fighting the Boko Haram insurgency to commemorate the Independence Day celebrations.

A statement by the president’s spokesman, Malam Garba Shehu said Buhari reiterated an earlier warning in his independence anniversary broadcast that he would not watch the country break up and dismissed separatists as dreamers who were not born when the country went through a debilitating civil war in which two million lives were lost.

Buhari, according to the statement, warned the military to discharge their responsibilities with dedication or end up being the losers.

“If you don’t stand firm, you will be the biggest casualties. I assure you that if Nigeria doesn’t exist, the first to be insecure are the law enforcement agencies, because no matter how many parts Nigeria will be divided into, nobody will take an old colonel or general to preside over his locality, not to talk of him getting pension or gratuity.

“Even for selfish reasons, your loyalty has to be for the centre first, and the centre will hold.

“I assure you that as long as I live and as long as I legitimately participate in this system, I will make sure that your rights as Nigerians, and loyal Nigerians, will be guarded jealously.

“I expect in return from you loyalty, and loyalty is from the bottom up; from the private to the corporal, to the sergeant and so on up to the generals commanding formations and to service chiefs, otherwise the centre will not hold and this centre is determined to hold.

“Those who are making noise were not born, so they don’t know what we went through. They don’t know. I like to remind you that whatever happens, you are the first line of defence of the citizens wherever they live.

“This administration is prepared to protect all citizens residing in all parts of the country,” he was quoted to have said.

The statement added that the president commended the fortitude of the wounded soldiers who were receiving treatment and wished them quick recovery after meeting them in a special tent.

It also said Buhari inspected military equipment, both those that were recently acquired and those that had been refurbished, as well as some of the new acquisitions of the Nigerian Air Force, including night-vision Mi 35 attack helicopters.

Shehu said the president opted to celebrate the anniversary with the troops in honour and appreciation of the courage and sacrifices of members of the Nigerian Armed Forces.

According to him, the ceremony was marked with a display of military hardware and a show of air power by the Air Force at the Maimalari Military Cantonment, which houses the headquarters of the Theatre Command, Operation Lafiya Dole.

Observing that it was the first time the ceremony had taken place outside the nation’s capital, Shehu said Buhari in his impromptu speech after inspecting the military guard of honour, hailed the gallantry of the Armed Forces for the successes so far recorded in the fight against terrorism in the North-east.

He also said the president commended the military for putting the unrest in the Niger Delta under control, assuring it that the country’s Armed Forces would be equipped with the best the country could afford.

“I assure you that in spite of my health failures in the last six months, I have never forgotten how much you mean to this country. I assure you that under this leadership, there will be available resources as much as the country can afford to support your operations.

“As long as you live and in service, your rights will be guarded jealously,” the president was further quoted as saying.

The statement added that the president encouraged members of the three arms of the military to return the gesture by being steadfast and loyal.

It noted that the Chief of Defence Staff, General Gabriel Olonisakin, in his welcome speech at the ceremony, commended the president for caring about the Armed Forces.

“He assured the president that the country’s military would continue to be loyal to the administration and expressed its readiness to guarantee the sovereignty of the nation and the security of its people.

“The CDS said the visit by the president would reinvigorate the morale of the Armed Forces, adding that with better morale, they will fight better.

But even as Buhari celebrated Independence Day with the troops in Maiduguri, the outspoken pastor and the serving overseer of The Latter Rain Assembly and Convener, Save Nigeria Group (SNG), Tunde Bakare asked Buhari to summon the courage to do justice to demands for the restructuring of the federation.

He said as far he was concerned the buck stops on the table of the president with regards to finding a solution to the present quagmire over rising wave of agitations.

Bakare, who made this known in a speech on the state of the nation to his congregation yesterday, said that due to the impression members of the National Assembly had created in the minds of Nigerians, many have expressed doubts over its members’ ability and willingness to midwife the process of restructuring.

“Mr. President, the buck stops at your desk and, as always, my earnest prayer is that you find the courage and political will to do what is right at this momentous period in the history of our nation,” he said.

Bakare who was Buhari’s running mate in the 2011 election, said that both the president and the lawmakers must work together to fashion out a stable and prosperous nation.

“These fears have morphed into a horde of agitations which, in an address upon his return in August, Mr. President charged aggrieved persons to channel to the National Assembly and the Council of State.

“However, due to the reputation that members of the hallowed chambers have created in the minds of Nigerians, many have expressed doubts as to the ability and willingness of the National Assembly to midwife the structural, institutional and constitutional solutions demanded by Nigeria’s historical and present circumstances.

“As a result, Nigerians from all walks of life are questioning Mr. President’s recommendations as to the proper channels for agitations, even though the National Assembly and by extension the State Houses of Assembly are the only available constitutional avenues for making peaceful change possible and violent change inconceivable.

“We can only keep hope alive by reminding ourselves that the National Assembly has in the past risen to the occasion and intervened at crucial moments such as this.

“We believe that the distinguished and honourable lawmakers will rise to the occasion and work closely with the president to pilot Nigeria into stable and prosperous nationhood.

“I must state that as far as championing the far-reaching structural, institutional and constitutional changes necessary to salvage the soul of our nation is concerned, the words on the desk of the 33rd president of the United States, Harry Truman: ‘the buck stops here!’ are relevant to President Buhari whose legacy is at stake.

“Mr. President, the buck stops at your desk and, as always, my earnest prayer is that you find the courage and political will to do what is right at this momentous period in the history of our nation,” Bakare said.

Bakare, who went done memory lane to capture efforts made by the Save Nigeria Group and his former party, the defunct Congress for Progressive Change (CPC) to find a solution to the clamour for the reform of governance, said under the present circumstances, he was recommending a 10-year transitional window beginning with the Muhammadu Buhari-led administration to pursue the issue of restructuring in a staggered manner.

“For those who care to know where I stand in all this, I am an advocate of progressive and pragmatic restructuring; progressive because ours is a long-term approach, and pragmatic because the interests of every segment of the country are taken into consideration.

“It is to this end that we reiterate, and even expand the scope of our call for the creation of a Presidential Commission for National Reconciliation, Reintegration and Restructuring by the president through an executive order, in full consultations with the Council of State and the National Assembly.

“The Presidential Commission should be given the mandate and the powers to facilitate, within ten years, the evolution of a functional and acceptable geopolitical structure subject to constitutional provisions while the 1999 Constitution is progressively amended.

“We expect that the project will be flagged off under the administration of President Muhammadu Buhari in the period leading to the next governmental fiscal year.

“Alongside the kickoff of the project, the president may send to the National Assembly a Bill for the Establishment of the Commission for National Reconciliation, Reintegration and Restructuring, however so named, to provide institutionalisation, continuity and legislative guarantee for the objectives of the restructuring agenda;

“To further safeguard its operations and objectives, we charge Nigerians to hold as a standard for electoral decision-making the commitment of aspirants and candidates towards the ten-year framework for a restructured Nigeria;

“Finally, we expect subsequent holders of public office at all levels of government to demonstrate the desired political will, drawing lessons not only from the Abuja story but also from more recent policy transitional success stories, including the Integrated Payroll and Personnel Information System (IPPIS), the Government Integrated Financial Management Information System (GIFMIS), and the Treasury Single Account (TSA) which were enacted by the preceding administration but are being implemented by the current government,” he said.

“I congratulate the nation on the victory of constitutionalism over conspiracies. The correspondence between the president and the National Assembly, in line with Section 145 of the constitution each time the president left to attend to his health, indicates some progress in our democratic experience, compared with almost eight years ago when a cabal hijacked power in circumstances bordering on the health of a sitting president.

“In this regard, credit must be given to President Muhammadu Buhari for his compliance with due process and to the leadership of the National Assembly, including the Senate President, Senator Bukola Saraki, and the Speaker of the House of Representatives, Hon. Yakubu Dogara, for making the most of the constitution despite its flaws.

“This evident growth is a shimmer of hope at a very sensitive period in which the destiny of the nation is at stake,” he said.