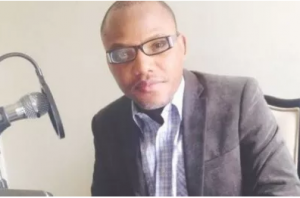 Justice Ahmed Mohammed of a Federal High Court sitting in Abuja, yesterday, withdrew from the trial of the detained leader of the Indigenous People of Biafra, IPOB, Mr. Nnamdi Kanu.

This was even as Kanu, who has been in detention since October 17, yesterday, declined to enter his plea to the fresh six-count charge that was preferred against him by the Federal Government.

The trio were in the charge that was signed by the Director of Public Prosecutions, DPP, Mr. Mohammed Diri, alleged to have committed treasonable felony, an offence said to be punishable under Section 41(C) of the Criminal Code Act, CAP C38 Laws of the Federation of Nigeria.

They were alleged to be managing the affairs of the IPOB which it described as “an unlawful society.”

At the hearing in the matter, yesterday, for the formal arraignment of the accused persons, Kanu, sought the permission of the trial judge to address the court.

Speaking from the dock, Kanu, who was flanked by the other two accused persons, gave reasons he would not subject himself to trial before Justice Mohammed.

The IPOB leader said he had no confidence that the court would grant him fair trial, saying he would rather remain in detention than to be subjected to the rigours of trial that would eventually amount to nothing.

Kanu insisted that the Department of State Services, DSS, had since his travail commenced, shown that it had a knack for disrespecting valid court orders.

He said: “Based on information available to me, I am convinced that I will not receive fair trial before this court. I will therefore, not sacrifice the due process of the law founded upon the principle of natural justice, on the altar of speedy release from detention.

“In other words, I will rather remain in detention than to subject myself to a trial that I know amounts to perversion of justice. There has been several rulings delivered by competent courts of jurisdiction which the DSS, never respected.”

At that juncture, the DPP, Diri, who is prosecuting the matter for the government, interjected, saying it was premature for the 1st accused person, Kanu, to start raising such issues.

“My lord, under section 396(2) of the ACJA, an objection to trial may be raised by the defendant only after plea is taken, but not before. In this case, the defendant has decided to put the cart before the horse by raising objection to his trial before the charge are read to him and his plea taken.

“I urge your lordship to over-rule the objection of the 1st defendant and order that the charge be read to the three accused persons for the purpose of taking their plea,” the DPP submitted .

Responding, Kanu’s lead counsel, Mr. Egechukwu Obetta, urged the court to ignore the DPP and accede to the request of his client.

Ruling on the issue yesterday, Justice Mohammed, disqualified himself from handling the matter, saying he will remit the case-file to the Chief Judge of the High Court for re-assignment to another Judge.

The judge said: “I am of the view that the 1st defendant has the inalienable right to object to being tried by this particular court. I sincerely see nothing wrong with the 1st defendant’s objection considering that justice is rooted in confidence. If any of the party has no confidence in the court, that party has a right to raise the issue.

It will be recalled that the arraignment was also stalled on Tuesday following the absence of both the prosecution and the accused persons in court, a situation that infuriated Kanu’s lawyer, who maintained that the fresh charge was merely a ploy by FG to retain his client in detention.

Meanwhile, authorities of Campaign for Democracy, CD, Anambra State chapter has restated their called on the Federal Government to release the leader of Indigenous People of Biafra, IPOB, Nnamdi Kanu to pave the way for dialogue and negotiations between the Biafran agitators and government.

CD said although it detested violent and forceful form of agitation for self determination, which is even against the ideology of revered Dim Chukwuemeka Odumegwu-Ojukwu, who stated that “violence is the worst form of irresponsibility, but it behoves on the government to apply dialogue in order to resolve the issue amicably for the mutual interest of all people.”

Speaking at this year’s 67th Universal Declaration of human right, entitled Our Rights, our Freedom Always, the state chairman of CD, Mr. Vincent Ezekwueme and his secretary, Tobias Maduakor, said Federal Government should be tactful, dynamic and diplomatic in handling the issue of the Biafran agitators to ensure peaceful and amicable resolution of the crisis.

Immediate past National Chairman of All Progressives Grand Alliance, APGA, and senatorial candidate of APGA in Anambra Central senatorial zone during the forthcoming senatorial re-run in the zone, Chief Victor Umeh has blamed all the National Assembly members from the South East geo-political zone for keeping silent in the face of Biafra’s agitation.

Umeh said “Our National Assembly members should have advised the Federal Government to release Kanu first and then intervene in the dispute to ensure that frayed nerves are calmed on the issue, instead of keeping silent while the agitation is escalating.”

The plaintiffs, in the suit before the Federal High Court, Abuja, applied for an enforcement of their fundamental human rights.

Equally cited as an applicant in the matter was an International Non-governmental organisation, Kingdom Human Right Foundation International.

The plaintiffs filed the suit for themselves and on behalf of people that were killed and those injured during recent pro-Biafra rallies in the South East and South South parts of the country.

Eight of the deceased persons were also listed as applicants before the court.