Contrary to earlier reports that Abubakar Audu, the governorship candidate of the All Progressives Congress (APC) in last week’s election is alive, report has confirmed that he has been buried.

This all but quells reports that the former governor had been resurrected by a prophet who came in from Lagos to pray for him. 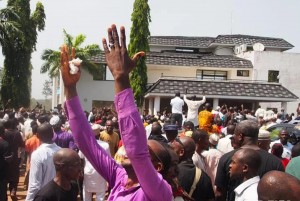 One of the sympathizers staring into the sky asking rhetorical questions 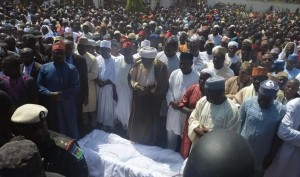 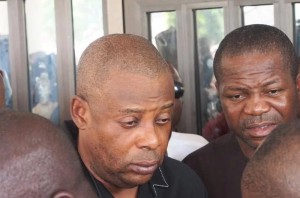 The social media had been awash with the report about the possible resurrection of the late politician, but it had be confirmed that he has since been buried and sympathisers have left the grave side but there are still tears in the compound.

Some of the sympathizers at his residence today.

The condolence register at the residence of the late politician.

“People are departing from grave site but a lot of sympathisers are still weeping profusely. Suratul Fatiha, the first chapter of the Quoran has been rendered. Sympathisers dispersing,” the report on the site read.

There is confusion in Kogi state over the possible resurrection of Prince Audu Abubakar, the governorship candidate of the All Progressives Congress (APC).

The former governor of the state was confirmed dead on Sunday evening and there were reports that he was buried today Monday 23/11/2015.

According to reports a cleric was taken into the house to pray and possibly revive the late politician, with their correspondent saying: “a prophet seeks to pray for Audu’s corpse and bring him back to life. Security inside and family members would have none of it but angry youths break the door open
‎
“The prayer man has successfully been forcefully taken in by the wish of the crowd and they have all joined in the prayers for the resurrection of Audu with Holy Ghost fire renting the air as well as shouts of Allahu Akbar.

‎”Dino Melaye and some family members came out through the back door to calm the angry crowd. While they are largely engaged in fervent prayers others are weeping loudly by the door.
‎
“As men and women of faith engage in fervent prayers to bring Audu back to life others are digging his grave in one end of the compound.”