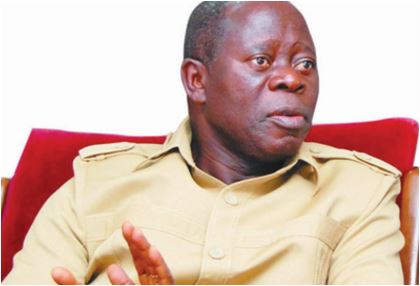 He disclosed this on Wednesday when he presented President Muhammadu Buhari with a new party membership card.

Oshiomhole told the president that the APC under his leadership, took advantage of modern technology to come up with a new membership data base, saying that the party currently has 15.6 million registered members.

“Today to talk about the size of our party, the largest party in the world and in Africa, we need to have evidence that can be verified by a third party or by members.

“We have taken advantage of technology to produce what I believed is the best or the first in Nigeria.

“We now have as at last week when they started printing of membership register, about 15.6 million registered APC members across the country,” he said.

Fact checking however showed that while APC may have registered 15.6m members, it is not the world’s largest. The Chinese Communist Party has 89million registered members, while India’s ruling party, Bharatiya Janata Party (BJP) has a membership of 110 million as at 2015. In Africa, South Africa’s African National Congress had 769,000 members as at 2015. The PDP membership strength is unknown.

The APC national chairman added that the party membership data base was designed to ensure that the membership status of anyone could easily be verified at the touch of a bottom.

Oshiomhole further added that with the development, the party had credible and verifiable persons to conduct direct primaries on the basis of its membership register.

However, he said the party would not in any way nullify or change the decisions of its National Executive Committee (NEC) at its sixth meeting, which allowed for indirect primaries, for logistics reasons

He said the APC will strive to give practical expression to its decision as transparently as possible.

This, he added, would ensure that the APC would not only be the largest, but the smartest, most democratic and most cohesive party in the country.