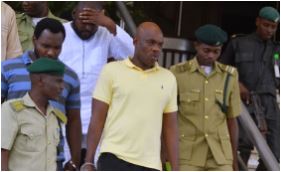 After a trial that lasted more than seven years, Justice Gabriel Kolawole of the Federal High Court, Abuja, finally sentenced Charles Okah and his accomplice, Obi Nwabueze, to life imprisonment for their complicity in the October 1, 2010 independence day bombings near the Eagle Square, Abuja, that resulted in the deaths of 12 persons.

The judge handed down the sentences yesterday, having found them guilty in five of the eight charges preferred against them by the federal government.

The judgment, which lasted for about six hours, has finally brought to a close the protracted trial over the independence day bombings in Abuja.

In contrast, Charles’ brother, Henry, who masterminded the bombings but was apprehended in South Africa where he was resident, was handed a 24-year prison sentence five years ago in that country.

Unsurprisingly, the Abuja trial judge lamented the tortuous journey that the court went through in ensuing that justice was served.

Okah, Nwabueze, Edmund Ebiware and Tiemkemfa Francis-Osvwo (aka General Gbokos) were initially arraigned before the court on December 7, 2010, over their alleged involvement in the bombings, which left 12 persons dead and several others injured during Nigeria’s 50th independence anniversary celebrations.

However, while Francis-Osvwo had died in prison custody, Ebiware, who was tried separately, was sentenced to life imprisonment.

Delivering his judgment yesterday, Justice Kolawole held that the prosecution, through the plethora of exhibits tendered and witnesses called during the trial, was able to prove its case against the two defendants beyond reasonable doubt.

He said though Charles Okah had called two witnesses including himself, while the second defendant had called four witnesses while the trial lasted, they were unable to prove their innocence.

The judge found Charles Okah guilty on counts one and eight, bordering on terrorism financing and perpetuating acts of terrorism in the October 1 bombings in Abuja, while Nwabueze was convicted on counts five, six and seven for the March 15, 2010 twin bomb blasts at the Delta State secretariat annex in Warri.

Having found the defendants guilty of the charges, the court consequently sentenced them to life imprisonment.

“They are accordingly convicted as charged,” held Justice Kolawole.

Also ruling on the plea for clemency by Messrs Emeka Okoroafor and Oghenevo Otemu, counsel to the first and second defendants, respectively, Justice Kolawole, said that the court was mindful, in applying the maximum sentence as prescribed by the Economic and Financial Crimes Commission (EFCC) Act, of the said offences, having earlier handed down a similar sentence on Ebiware in 2013.

The judge also held that to ensure justice was served in the eyes of those who were injured, had died or had lost loved ones, owing to the dastardly act perpetuated by the defendants and dissuade others from similar acts, the maximum punishment as prescribed by the law must be handed down.

Also citing the recent abduction of 110 schoolgirls from a secondary school in Dapchi town, Yobe State, Justice Kolawole stressed that the judiciary could not remain aloof to the increasing wave of violent crimes in the country and as such had to deliver judgments that would serve as deterrent to others.

In the course of the trial, the prosecuting counsel, Mr. Alex Izinyon (SAN) had called 17 witnesses to prove that the defendants actually committed the crime.

Following the closure of the prosecution’s case, the defendants however filed a no-case submission, which was dismissed by Justice Kolawole on June 1, 2017.

In dismissing the no-case submission, the court had held that the prosecution had made a prima facie case through the testimonies of witnesses, which linked the defendants to the charges that required them to offer explanations.

Consequently, the court ordered the defendants to open their defence on July 5, 2017.

On December 15, 2017, the defence team closed their case after calling seven witnesses, including the first defendant.

After taking the submissions of their counsel, Justice Kolawole had adjourned till yesterday for ruling.