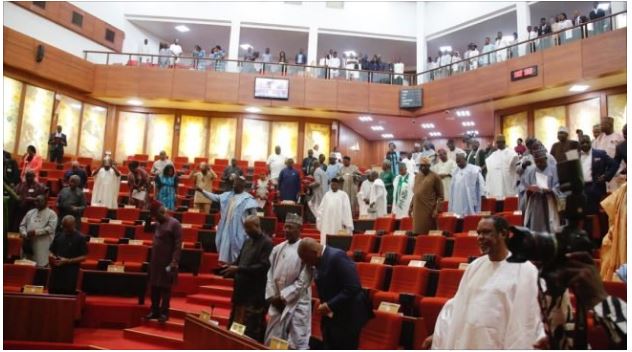 The senate has reintroduced a bill seeking to establish a commission for the prohibition hate speech in the country.

The proposed legislation passed first reading in the upper legislative chamber after Nelson Ayewoh, clerk of the senate, read the short title of the bill on Tuesday.

The bill entitled, ‘National Commission for the Prohibition of Hate Speeches Bill 2019’ is sponsored by Sabi Abdullahi, deputy majority whip of the senate.

The development is coming a week after the senate introduced a bill to regulate social media.

The former senate spokesman first sponsored the hate speech bill in the last assembly, but the bill did not make it through to third reading.

It is unclear if the new bill is a revision of the old one.

The bill presented to the previous senate prescribed death by hanging for any person found guilty of any form of hate speech that results in the death of another person.

It said a crime is committed when: “A person publishes, presents, produces, plays, provides, distributes and/or directs the performance of any material, written and/or visual, which is threatening, abusive or insulting or involves the use of threatening, abusive or insulting words or behaviour, commits an offence if such person intends thereby to stir up ethnic hatred, or having regard to all the circumstances, ethnic hatred is likely to be stirred up against any person or persons from such an ethnic group in Nigeria.

“A person subjects another to harassment on the basis of ethnicity for the purposes of this section where, on ethnic grounds, he unjustifiably engages in a conduct which has the purpose or effect of (a) violating that other person’s dignity or (b) creating an intimidating, hostile, degrading, humiliating or offensive environment for the person subjected to the harassment.

“Conduct shall be regarded as having the effect specified in subsection (1) (a) or (b) of this section if, having regard to all the circumstances, including in particular the perception of that other person, it should reasonably be considered as having that effect.”