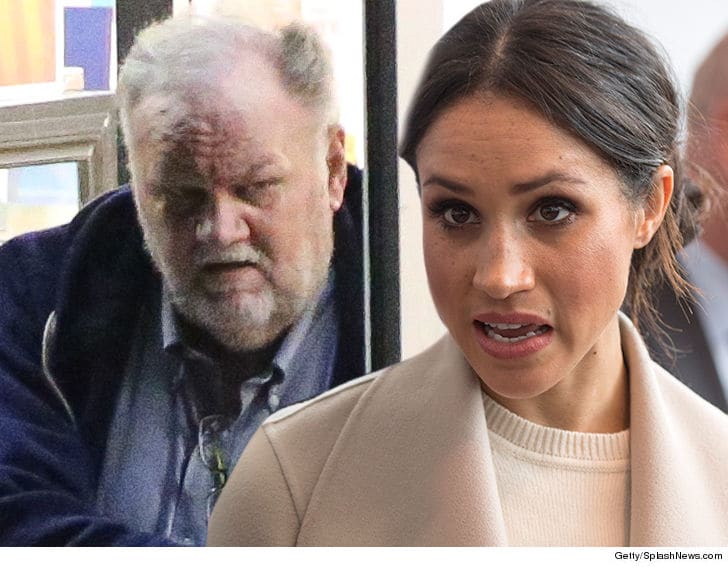 You are not just getting a new family to spend Christmas, Easter and the Trooping of the Colour with — a clan who is banned from playing Monopoly and loves nothing more than decimating the pheasant population of Norfolk with large-bore rifles.

You are getting a full-time job, complete with annoying bosses, b**chy co-workers, deadlines and dull responsibilities.

The last week proves that Meghan doesn’t quite get that yet.

This current brouhaha began when five friends of the Duchess of Sussex gave totally spontaneous and not at all choreographed interviews to People, portraying the former actress as some sort of modern day Mother Teresa-meets-Martha Stewart with her home-cooked dinners for Harry and predilection for spending her spare time finding perfect scented candles for the guest rooms.

In among the platitudes, these friends claimed that Meghan’s father Thomas, who has TMZ, Piers Morgan and the local heart attack unit on speed dial, had not been in touch with the Hollywood star since she turned HRH.

He retaliated by releasing portions of a letter he says Meghan sent him in August last year, in which she begs him to stop embarrassing her.

So far, so horrible. This is a messy family feud, replete with lots anger, hurt and blame. Who is really the victim here is up for debate — is she a clever media manipulator or is he a tabloid-loving story monger?

We don’t know. But what is clear is that it’s time for Meghan to put an end to all of this. She had to know when she sanctioned the People story that Thomas would retaliate in the only way he knows how, by going to the media and spilling all the tea.

This Markle family drama is like some sort of terrible tabloid Gordian knot.

Meghan obviously feels deeply aggrieved about the tsunami of negative stories about her that have hit the headlines, from her 5am emailing ways to allegedly demanding St George’s Chapel be spritzed with something like Glade to get rid of that musty smell, to the notion she is Duchess Difficult.

However, she is missing the bigger picture.

The former Suits star is only perpetuating this messy family situation. By circumventing the Kensington Palace press apparatchiks she has shown just how desperate she is to push her own narrative and to be seen as the victim (which she may well be).

But she is forgetting something imperative to royal life: It’s not about you. It’s about whomever’s face is on the stamps.

In putting the People story into motion, and thereby causing Thomas to release her letter, Meghan was making the crucial mistake of thinking her own public image matters more than that of the family and fairly ancient institution she willing became a member of.

Being a Windsor means putting your head down and getting on with the job of opening dog charities in Devon and propping up the fascinator industry.

It means putting the wellbeing and image of the royal family ahead of her own and that involves putting on a nice coat, trotting along to some hospital opening and smiling, not worrying about whether the public thinks you are demanding b**ch.

It is also interesting that the People story and Lettergate happened only weeks after her new Communications Secretary Christian Jones came on board.

If this is the sort of advice he is giving her when they WhatsApp in the dim light of dawn while she practices her downward dog, I’d be thinking about sending him back to his former posting, managing the much-less fraught situation that is Brexit

(I’d also wager that when she stepped out for a very public lunch with him recently in Notting Hill she was sending a message to the Kensington Palace PR mandarins that she was about to start doing things her own way.)

Meghan’s father has obviously hurt her deeply (and she him) but enough. Put on your best Givenchy coat, Meg and get out there and find some homeless cats or something to help.

It might have taken nearly a year, but only now is the truth hitting home: She got the fairytale wedding but the Happily Ever After is far, far more complicated and demanding.