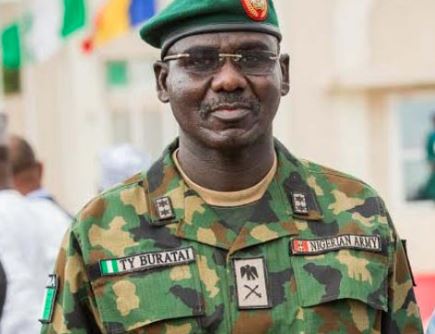 The operation involves soldiers requesting people to identify themselves as part of efforts to track down fleeing insurgents and other criminals.

The operation started in the Northeast on September 22.

Chief of Army Staff Lt.-Gen. Tukur Buratai, who appeared before the House of Representatives on Thursday, explained how the operation would be carried out.

Gen. Buratai told the House Committee on the Army that the operation would be intelligence-led.

He said there would be no deployment of troops or mounting of roadblocks.

The Army chief said the public may not even notice his men in the course of the exercise.

According to him, it is targeted at identifying fleeing Boko Haram members and other criminals.

He emphasised that the public had nothing to worry about.

But the lawmakers fear the military, by its training, may engage in excesses.

They wondered whether the Army has the constitutional right to carry out the proposed exercise.

The committee’s members were divided on whether the Army should be allowed to go ahead with the exercise.

Some were not convinced that rights will not be violated.

Gen. Buratai represented by the Director, Civil/Military Affairs at the Army Headquarters, Maj-Gen. U.S. Mohammed, said Nigerians would not notice any significant changes from the ongoing military operations in the country.

Buratai said: “What is happening is that the military has been involved in Operation Lafiya Dole in the Northeast. Within the major operation, we have subsidiary operations and one of them is this Operation Positive Identification.

“It came about as a result of positive information about the activities of Boko Haram in the Northeast the fact that they are making inroads to other parts of the country.

“From our intelligence, they are spreading from their traditional stronghold. Based on that, this idea came up to embark on our cordon and search operations. We will make some arrest and do some identification. The operation started on the 22nd of September, 2019.

“For this period of the year, the military has introduced some exercises aimed at tackling the security challenges in parts of the country. It is aimed at training ourselves and carrying our security operations. We use the opportunity to carry out specific and targeted activities.

“Operation Positive Identification is intelligence-led activity. Based on credible information, we go to certain areas, make an arrest and profile those arrested by identifying them and through that, we may be able to identify some Boko Haram members and other criminals.”

The Army chief stressed that there would not be an increase in the number of troops.

He said: “There will be no additional checkpoints because it is all intelligence-led. The fact that we are extending it to other parts of the country does not mean there are changes. It is strictly based on credible information and intelligence.

“We are going to observe our usual rules of engagement and code of conduct for troops during internal security arrangements. Some of these things are being done in conjunction with other sister security agencies which is assisting us in the operation.

“The fact that we are spreading it across the country does not mean we are making changes to it. You will not even notice anything. The exercise is nothing different, but will assist us and add value to whatever we are already doing.”

Buratai said: “As I said, we are undertaking three major exercises beginning from 1st of November to 23rd of December. We’re going to conduct raids within those areas. It is essentially aimed at ensuring that some of those security challenges are curtailed to the barest minimum as we approach the yuletide.

“I want to assure the House and law-abiding Nigerians to go about their lawful duties. It is not going to involve additional troops on the road. Anywhere we get credible information about the gathering of these bad guys, we conduct raids or cordon and search and if in the process, we make an arrest, you will be asked to identify yourself.

“The major focus is because of the Boko haram and terrorist groups and criminals from the Northeast and Northwest. We have information that they are trickling down to other parts of the country.

“During the operations, if individuals are arrested, they will be asked to identify themselves and to know who they are. But we are not going to base it on any particular means of identification. We are just trying to ensure that we apprehend some of these criminals that may have escaped from the Northeast.”

Buratai said President Muhammadu Buhari, the Minister of Defence and the Chief of Defence Staff were aware of the operation.

But, a member of the committee, Christopher Ngoro (PDP, Cross River) said it was unconstitutional for the Army to subject Nigerians to such exercise. He said it was the duty of the Police to carry out such exercise.

He stressed that carrying out such exercise would amount to declaring war on the country, adding that the Nigerian Army does not have the constitutional power to declare war on the part of the country.

Ngoro said: “According to the Constitution, the military are supposed to support the Police in internal security operations. The military should not lead an operation like this. If any other organisation was leading this operation, the planning will emanate from that organisation.

“But the operational planning for this operation is emanating from the Army. Therefore, we cannot be swayed by your persuasiveness to think that you are just cooperating with other organisations. No, you are not in any way.

“The Police are trained differently from the Army and that is why there is so much fear in the society over your activities. The police are trained to identify the enemy, arrest the enemy and bring the enemy to trial. That is not the training of a soldier.

“The soldier is trained to identify the enemy, shoot the enemy and to kill the enemy. So, if civilians are the target of your operation, that is what they think you are about to do. The other operations in Nigeria are segmented to different areas and the operational guidelines guiding them are segmented to those areas.”

The committee’s chairman, Abdulrazak Namdas, said the House learnt that the operation would begin today and would involve Nigerians carrying some form of identification when they leave home.

Namdas noted that the major role of the Army is to safeguard the country’s territorial integrity, in which soldiers could be invited to assist other security agencies.

He admitted that there were serious security issues, such as insurgency, pipeline vandalism, kidnapping, cattle rustling, banditry, among others, but added that the Army cannot usurp the role of the Police.

Namdas said: “Given the number of issues at hand, we are shocked to hear that the military is adding to its authority by taking the job of the Police or Immigration.”