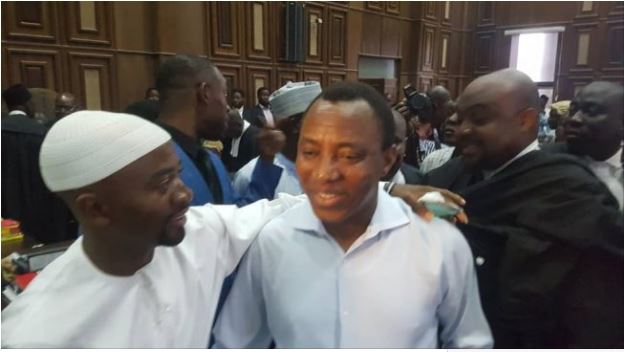 Femi Falana, a senior advocate of Nigeria (SAN), says legal measures will be taken against the Department of State Services (DSS) over its refusal to release Omoyele Sowore, convener of the #RevolutionNow Movement.

A federal high court in Abuja had on Wednesday oordered the release of Sowore alongside Olawale Adebayo better known as “Mandate”, but the DSS did not comply with the order.

In a statement on Thursday, Falana said this is the second time the DSS would ignore court order to release Sowore.

“On 8th August 2019,  the Honourable Justice Taiwo Taiwo granted the application of the State Security Service to detain Mr. Omoyele Sowore for 45 days,” he said.

“Upon the expiration of the 45-day detention period the court granted Mr. Sowore bail on September 24, 2019.  He met the bail conditions but the State Security Service refused to release him from custody.

“Mr. Sowore and Mandate Bakare were subsequently charged with treasonable felony, cyber stalking and money laundering on September 30, 2019. The trial judge, the Honourable Justice Ijeoma Ojukwu admitted the defendants to bail under very stringent conditions. Upon meeting the bail conditions Justice Ojukwu directed the State Security Service to release the defendants from detention.

“But in utter contempt of the orders of Justice Ojukwu the State Security Service has refused to release Messrs Sowore and Bakare from custody.

“Since the State Security Service is not above the law of the land we shall embark on appropriate legal measures to ensure compliance with the court orders.”

Peter Afunanya, DSS spokesman, did not respond to a message seeking reaction to the matter.