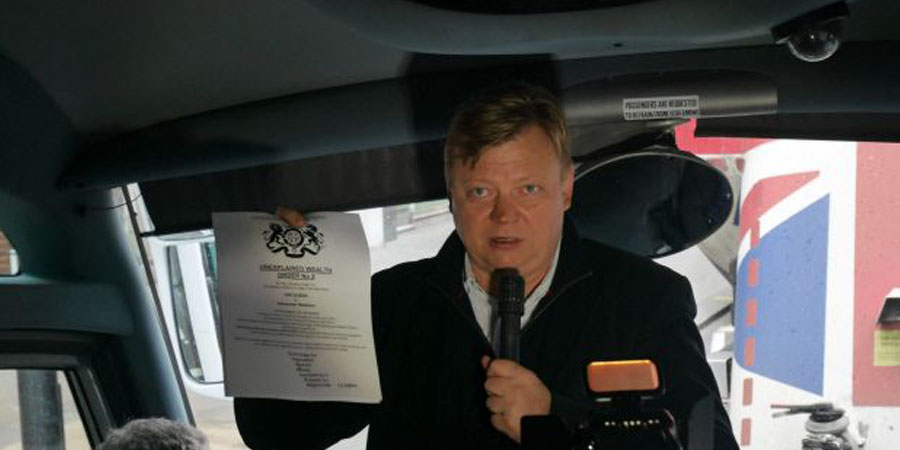 In a bid to expose the murky Nigerian money lurking behind some of London’s most high-end properties, anti-corruption campaigners are offering an unusual property tour of the British capital.

As the coach carrying journalists and campaigners winds through luxurious west London, experts revealed the hidden world of misused public funds, unexplained wealth and the British “enablers” who make it happen.

The coach’s first stop was the multi-million pound home of “one of the biggest political movers” currently operating in Nigeria, who was named in the so-called “Panama Papers” leak that revealed the holders of offshore accounts in the tax haven.

One of the expert guides, journalist and author Oliver Bullough, said London had become the “Death Star” of global kleptocracy, which he defined as the stealing, hiding and spending of public money.

He explained that London was unique in being able to facilitate the final two steps in that process.

The British capital’s banking sector and overseas dependencies were able to hide dirty cash and its high-end estate agents were eager to convert the cash into properties, many of which remain empty, Bullough said.

The next stop takes in a luxury flat close to Marble Arch, which another of the expert guides, former US State Department intelligence expert Matthew Page, said belongs to a political leader implicated in fuel-subsidy and bribery scandals in Nigeria.

Neighbourhoods ‘hollowed out‘
The tours are organised by anti-corruption campaigner Roman Borisovich, who has specialised in exposing shady Russian money, and are held every few months.

Borisovich said he set up the tours “to attract public attention to the enormous proportions of money laundering that is being washed through UK properties”.

He told AFP he had chosen Nigeria for the latest tour as it was “the only country that is openly asking the British government to repatriate the proceeds of crime, which were stolen from the country”.

Nigeria President Muhammadu Buhari last year called for a return of some of the estimated $37 billion (31.5 billion euros) stolen from Nigeria that has ended up in London.

One of the stops on the tour is a multi-million pound central London flat currently at the centre of of a civil lawsuit by the US Department of Justice.

US authorities believe the property was a gift to Nigerian former energy minister Diezani Alison-Madueke in exchange for an oil contract.

Alison-Madueke has been implicated in bribery, fraud, misuse of public funds and money laundering cases in Britain, Italy, Nigeria and the United States.

The former president of the global oil cartel OPEC — and the first female to hold the post — she has always denied the allegations which involve billions of dollars syphoned from oil deals and state accounts.

Another luxury property on the tour is registered to the charity of a Nigerian career politician, while guides explain the intricate backroom deals between oil giants and public servants.

The mood amongst the journalists and activists on board takes a sombre turn as the coach passes Grenfell Tower, the west London bloc where an estimated 80 people died in a fire in June.

The luxury flat of a Nigerian businessman and academic in the very same development which rehoused the survivors of tragedy is the final stop.

“We wanted to emphasise the problem that money laundering creates in London when you have affluent areas that are becoming deserted, whole neighbourhoods are being hollowed out, while the less well off are suffering, like in the Grenfell Tower,” Borisovich told AFP.

His NGO, ClampK, is set to host more tours, with other countries such as Kazakhstan in the spotlight, and is preparing an a smartphone app to allow members of the public to do their own walking tours of the capital’s dirty money hotspots.