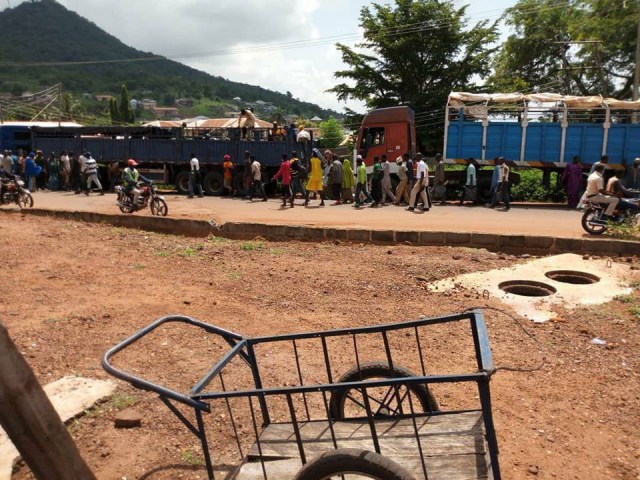 Three trailer loads of aliens from a neighbouring country allegedly recruited to vote in the Ekiti governorship election are travelling to Ekiti State have been intercepted in Lokoja, Kogi State by the Nigeria Immigration Service yesterday.

Vanguard reliably gathered that the officers of the Nigerian Navy intercepted the trailers at the naval post in Banda, a suburb of Lokoja before handing them over to the immigration officers.

The illegal immigrants who were mainly young men, few women and young children were conveyed in three different trailer trucks with registration number XD 1464 LD, SRZ 148 XA, and KMC 514 ZV. Some of the aliens revealed that they were on their way to Ekiti State before they were cordoned off by the immigration staff. A source within the Immigration Service who corroborated the story said some of them confessed to the Command during interrogation that they were going to Ekiti to vote in the forthcoming governorship election as they allegedly displayed voter’s cards meant for the election.

The source said some of the suspects disclosed to them that they had been mobilized for the forthcoming Ekiti State governorship election.

However few others claimed to be traders heading to Okene where they sell foodstuffs.

Confirming the arrest, the public relations officer of the Kogi State command of the Immigration Service, Mr. Olasunkami Salami told Vanguard on the phone that the command is still profiling the immigrants to ascertain where they were coming from and where they were going.