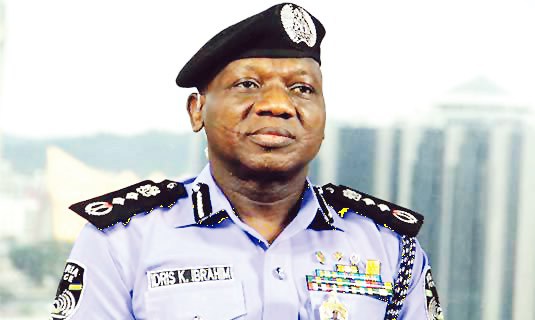 The Inspector General of Police (IGP), Ibrahim Idris has advised the new board of Police Service Commission (PSC) chaired by former IGP, Musiliu Smith to follow laid down procedure in the much touted planned demotion of some police officers who were promoted since his appointment as the IGP in 2016.

LEADERSHIP had sighted the letter titled: ‘’Re: Planned Demotion of Police Officers Promoted Between 2016 and 2018 by the Newly Constituted Board of the Police Service Commission’’, dated September 23, 2018, the IGP addressed to PSC chairman.

The IGP said even though the PSC Chairman has the right to discipline or demote officers of the force, he has to tread the path of constitutionality, legality, duties and powers conferred on his offices and that of the IGP by the extant laws.

He told Smith that the functions, roles, inherent powers and duties of the offices of PSC Chairman and the IGP are unambiguous and are contained in the 1999 Constitution (as amended), Police Act, Police Regulations and Police Service Commission Act.

‘’I appeal to the highly experienced Chairman of the Commission and a well-respected former IGP, not to allow the Police head for collision.

‘’On my appointment as the IGP on the 22nd of June 2016, I assured President Muhammadu Buhari of my determination to confront crime and criminality in the country in line with the mantra of His Excellency. I have largely succeeded on this promise as there is hardly any major crime without a breakthrough.

‘’This was made possible with the support of highly dedicated, professional, efficient and committed officers who worked day and night to ensure their arrest and prosecution while others are lazing about in search of posting. The only way to encourage and motivate these officers for greater efficiency is to recommend them for special promotion in line with the general principles of promotion”.

‘’These recommendations were duly approved by the Commission and letters of promotion issued to them and the officers posted accordingly and are performing efficiently. For the same Commission to demote them outside their power of discipline to say the least will be arbitrary, selective and discriminatory”.

‘’I am however quite certain that the Chairman will not tow this line of action despite petitions from disgruntled officers. If it does, the Police Service Commission, the Nigeria Police and the affected officers will not only be locked in very serious litigations but in controversies and scandals that will not do the Police any good”.

Idris said he first regarded it as mere normal rumours when he began to read in the news media that Smith had constituted a committee being headed by the former Justice of the Supreme Court, Justice Clara Bata Ogunbiyi to review and demote Police officers promoted between 2016 and 2018 by the last PSC Board.

He said, the news began to assume life of its own when Smith’s personal assistant, CP Olayinka Balogun (rtd) had on September 19, 2018 in the office of the Commissioner of police, Osogbo boasted that the commission had concluded plans to single out some officers for demotion.

Idris who stated that his office has not been contacted before embarking on such exercise as required by the laws and protocol averred that he has to write therefore to draw attentions of the PSC chairman who was a former IGP and Justice Ogunbiyi, a former Supreme Court justice to the tradition, normal practices and positions of the laws governing the matter.

Meanwhile, the Chief Judge of the FCT High Court, Justice Ishaq Bello has assigned the suit for enforcement of fundamental right filed by group of human right activists seeking to stop the planned demotion of the officers to Justice O.A.Adenyi sitting at Apo, Abuja.

The activists have asked the Abuja High Court to halt an exercise by the Police Service Commission to demote some police officers who enjoyed special promotion recently for gallantry and superlative performance.