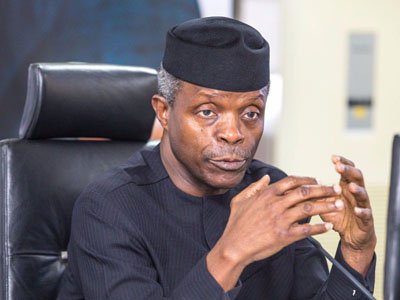 The Vice President Yemi Osinbajo panel on the farmers/herdsmen clashes raised a committee yesterday to address some specific aspects of the task of ending killings in the country.

Zamfara State Governor Abdulaziz Yari, who broke the news, said the sub-committee headed by Ebonyi State Governor Dave Umahi, will interface with the Miyetti Allah and the other stakeholders in the herders/farmers crises.

He said some of those involved in the clashes had taken it as a money-making venture, adding that criminals also hide under them  to perpetrate evil.

He said: “There is progress. This committee is a NEC committee established by the Vice President so that this issue of herdsmen/farmers clashes will be put to rest.

“Though it is a long-standing problem since 2007, in some states, particularly in my own state, we have been battling with it. Now the states and Federal Government under the leadership of the Vice President have agreed to have a small committee at NEC so that the situation will not get out of hand, so that it won’t be looked at as an ethnic crisis or religious crisis.

“So, in our discussion today, we set up a committee headed by the Governor of Ebonyi State. Plateau and Adamawa governors are members. Other people will be brought to join the committee from hotspot states – Benue, Taraba, Adamawa and Zamfara, where there is crises so that they can interface with the Miyetti Allah and other groups to see how we can reduce this to the barest minimum.

“As government, we have to take all the measures despite the fact that the Army, Police, and all the security agents  are on the field at the respective places, still we have to form this committee to interface with those actors so that this matter can be reduced to the barest minimum and possibly be wiped off.” he said

No fewer than six people have been killed and many others injured in another night attack on Kaguru village in Birnin Gwari Local Government Area of Kaduna State.

The police have moved men and officers to the area to fish out the perpetrators. The State Emergency Management Agency (SEMA) is providing relief materials for distressed people and taking the inventory.

An indigene of the area, Abdullahi Usman, said the gunmen suspected to be herdsmen attacked the village on Wednesday night.

Usman, who said, the villagers were caught unawares, added that “after the gunmen sacked the village, they continued shooting sporadically and they went round to release all the cows from house to house and led them into the bush unchallenged.

“They also set many houses ablaze after that. Nobody knows the exact number, but the cows are in their hundreds, they took all of them and left with them after killing six innocent souls.” Kaduna police spokesman ASP Mukhtar Aliyu said the gunmen invaded the community while the villagers were asleep. He confirmed that six people were killed. “The hoodlums invaded the community when the residents went to bed after which they started shooting indiscriminately and burning down houses before the arrival of security operatives.

“More troops have been deployed in the affected region, while those that sustained injuries were taken to Birnin Gwari General Hospital for medical attention,” he said.

A source in Birnin Gwari told our correspondent that, heavy movement of security personnel was witnessed in the area yesterday morning.

In a statement, the Kaduna State Government said, “The government has condoled with the Kaguru community in Birnin Gwari Local Government Area of the state, following the killings by unknown gunmen of some residents of the community.”

The statement signed by the Senior Special Assistant to the Governor on Media and Publicity, Samuel Aruwan, said: “The Kaduna State Government wishes to extend its condolences to the entire Kaguru community. It urges vigilance and prompt reporting to appropriate authorities of suspicious movements and actions.”