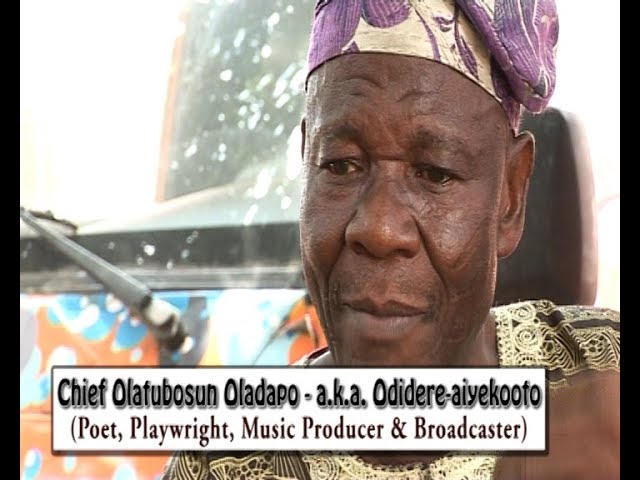 Born Abraham Ọlátúbọ̀sún Ọládàpọ̀, he attended Phillip’s Primary School in Ararọmi Owu, Osun State in 1950, then went to St. James’ Olanla in Akinyele, Ibadan from 1951 to 1954, and later attended the University of Lagos.

He underwent training at St. Luke’s Teachers’ Training College, Ibadan, where he first started performing poetry with a presentation at the school in the 1965 festival of arts where he chanted Ìjálá Yorùbá oral poetry.[3] He completed that in 1967 and was posted to St. David’s School, Kudeti, Ibadan. He has said: “It was at St. Luke’s that my talent in drama was discovered, and it was on account of this that I was sent to the University of Lagos to study for a diploma in Yorùbá Studies free of charge. I came out with a distinction in that programme.”

In 1969 he joined “The Sketch newspaper”, GbounGboun, a Yorùbá newspaper, where he worked for a year before moving in 1970 to Western Nigeria Television (WNTV), Western Nigeria Broadcasting Service (WNBS). There he met the likes of Adebayo Faleti, who impacted on him greatly and Prince Adebayo Sanda, the presenter of Kaaro Ooojiire and Tiwa N’tiwa. Oladapo resigned in 1977 to found a record company, Olatubosun Records, to seek out, promote and produce indigenous-language artists and folk poets across the Yorùbá country.

Oladapo has released about 29 different books, some of which are used as recommended text across primary and secondary schools and Universities in Nigeria and abroad.