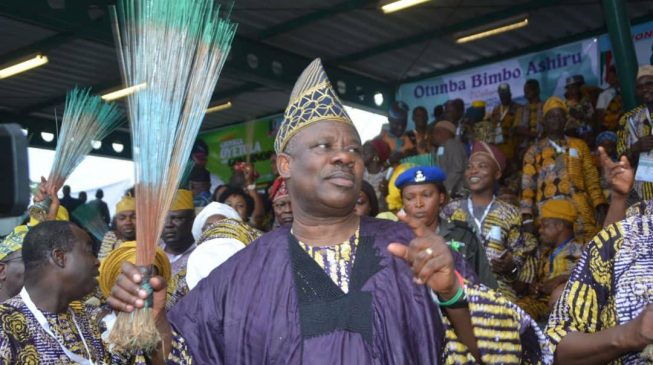 The Ogun State Governor, Ibikunle Amosun, on Monday, begged angry party members not to disgrace him before President Muhammadu Buhari

Amosun made the appeal during the Ogun State All Progressives Congress presidential rally in Abeokuta.

The rally, which started immediately after President Buhari arrived at the MKO Abiola International Stadium, Kuto, Abeokuta venue of the event at about 3.00pm, was suspended for some minutes following the violence that broke out.

Violence erupted when Oshiomhole was invited to the podium for his speech. As he began to speak, suspected hoodlums started throwing stones at him and one of the stones flew in the direction of the President.

Appealing to the angry crowd, Amosun said, “I beg you in the name of God. This is what they want to happen. Please don’t disgrace me here,” he said in Yoruba.

Despite the breakdown of law and order at the rally, Oshiomhole hurriedly presented the party flag to Abiodun.

Earlier in his welcome address, Amosun had eulogised Buhari’s virtues and highlighted the reasons Ogun people should vote for him.

Amosun said, “ We have accepted President Muhammadu Buhari as our father. In the interest of love and the respect we have for Mr President, let us swallow our pride and subdue our anger. Don’t let them go back with an erroneous impression that we are not for Buhari.

“We are not just supporting Buhari because he is our father, but, because of his performance. Look at what he has done for the entire nation, he is someone with integrity. He said he would fix all our roads and infrastructure. He has done a lot for us. He has kept all his promises. They are looters and that is why they are against Buhari. This is about all of us”.

Amosun, however, attacked Afenifere, urging the President not to lose sleep over the group’s endorsement of the presidential candidate of the Peoples Democratic Party, Atiku Abubakar.

He said, “We have seen the wonderful work Buhari is doing is for all of us. Yoruba are not two in the country. We are the Afenifere.

“We are the people that will use our PVCs to defeat those that call themselves Afenifere. Who else is Afenifere if we are not Afenifere ?. Tinubu, Akande, and other Yoruba leaders are here.

“They are not your friends, they are our enemies. We are going to fight them with our votes. We will show the true opinion poll on Saturday.”

The governor, however, provoked Oshiomhole and other party leaders when he urged his supporters to vote Buhari on February 16 while he stylishly supported Adekunle Akinlade of the Allied Peoples Movement.