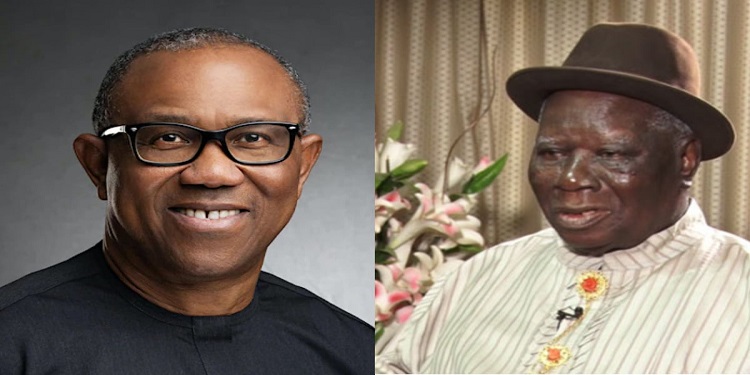 Shortly after former president Olusegun Obasanjo declared his support for the presidential candidate of Labour Party, Peter Obi, other big wigs had a field day as Nigerians watched elder statesman, Edwin Clark, Benue State Governor, Samuel Ortom and former military Head of State, Ibrahim Badamosi Babangida IBB, endorse Obi in his bid to take over the mantle of leadership in Nigeria in February 2023.

Recall that Obasanjo endorsed Obi on Sunday, while the Governor of Benue State declared his on Tuesday. General Ibrahim Badamosi Babangida (IBB), endorsed Obi, even as he lauded the leadership role of Olusegun Obasanjo and identified him as an elder statesman and big time General. He agreed with Obasanjo’s endorsement of Obi which has brought about great frenzy on social media.

His words: ‘Gen. Olusegun Obasanjo will forever be a true elder statesman and a boss in the military. No serv­ing General in the Nigerian army today joined the mil­itary earlier than 1982. By then, Obasanjo had already finished his military career. I respect him a lot, with his endorsement.’

On his part, the leader of the Pan-Niger Delta Forum (PANDEF), Edwin Clark, stated, Tuesday, that he had confidence in Peter Obi and his running mate, Ahmed Datti were fully qualified to take over the mantle of leadership from the present Buhari-led administration.

Speaking, in a statement titled ‘Peter Obi, My Choice for the 2023 Presidential Election’, Chief Clark said that he reached that conclusion after he met with PANDEF leaders of Niger Delta region as they articulated and presented their needs to the Labour Party presidential flag bearer.

He opined that Obi shares his vision of a united and egalitarian which is built on shared prosperity and commitment to justice, equity and fairness. He further stated that Obi’s vision for Nigerian youths that were forgotten by previous administrations is that they are supported so as to get all well- meaning Nigerians, irrespective of religious and political affiliation to gain total support for the Obi-Datti presidency.

‘I have since been fully briefed on the successful out­come of the interaction held at that occasion. Amongst other things, I have taken note of the following observations which came out of the meet­ing:

‘That PANDEF presented the expectations and demands of the peoples of the Niger Delta, comprising infrastruc­tural development, devolution of power, resource control, effective and inclusive par­ticipation in the oil and gas sector, amongst other things, to the presidential candidate.’

‘That the vision statement shared by His Excellency Pe­ter Obi at the occasion, as it re­lates to making Nigeria more productive, using the rich re­source endowment in every part of the country; curbing waste and fighting corrup­tion; and creating jobs for our teeming youths through innovative initiatives is very commendable.’

‘That his restated commit­ment to restructuring and devolution of power, will pro­mote harmony, peaceful co­existence amongst the states and constituent parts of the country.’

On his part, Governor Ortom extolled Obasanjo for showing objectivity, truth and patriotism as a statesman whose ideas about national issues are mostly taken seriously.