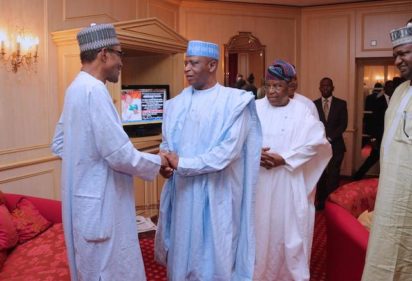 It was supposed to be a special day in the life of the ruling People’s Democratic Party, PDP. August 31, 2013 was the 15th anniversary of the formation of the party and it was on that day that seven governors, several senators alongside former Vice-Presiden,t Atiku Abubakar fractured the cohesion of the then ruling party.

The men and their followers after walking out from the convention of the PDP holding at the Eagle Square in Abuja proceeded to the Musa Yar‘Adua Centre, where they proclaimed the New Peoples Democratic Party, nPDP. Eventually, only five of the governors, from Kwara, Sokoto, Kano, Adawawa and Rivers forged ahead with the plan. Governors Sule Lamido of Jigawa and Babangida Aliyu of Niger States turned around from the rebellion and found their way back to the PDP.

Then speaker of the House of Representatives, Aminu Waziri Tambuwal joined the script in November 2015.

The nPDP as they styled themselves eventually collapsed into the then just registered All Progressives Congress, APC and became the game changer in the defeat of the PDP in the 2015 general election. One of the former governors, Rotimi Amaechi became the director-general of the APC Presidential Campaign Organisation which scored the historic record of stopping the re-election of an incumbent president.

Besides handing over the five states they controlled to the APC in 2015, they also helped in vanquishing the PDP in Plateau, Benue and Kogi States. Senator Bukola Saraki, leader of the party in Kwara State was, according to multiple sources also the pointsman who helped galvanize the rebellion in the North-Central,.

Besides the presidency, the new party also won the majority in the two chambers of the National Assembly.

Without any attribution, the opposition was said to have come from the party. But when and where the “party” took the decision that the two men should not contest the presiding officers’ position of the National Assembly was never addressed.

Remarkably, the two men were from the nPDP bloc of the party. Eventually, mutterings arose as their sympathisers pointed to the fact that all the other blocs in the party got positions. While the Congress for Progressives Change, CPC bloc got the presidency, the old Action Congress of Nigeria, ACN bloc got the position of the vice-president.

The old All Nigeria Peoples Party, ANPP bloc got ministerial positions besides the position of national chairman of the party through the person of Chief John Odigie-Oyegun who was an old member of the party before his last-minute defection to the defunct ACN.

Yesterday’s decision of the nPDP to break out from the ruling party followed years of muttering of persecution, marginalisation and derailment of the set objectives of the APC as proclaimed before the 2015 election.

Though not all members of the nPDP are following the latest script, (the most notable exception being Minister of Transportation, Rotimi Amaechi) the rebels of yesterday have sufficiently mobilised many others who were not original members of the nPDP into their flanks.

Remarkably, one of those who addressed the press yesterday was Buba Galadima, the erstwhile secretary of The Buhari Organisation, TBO the political structure that was until the 2015 campaign, the secretariat of everything Buhari.