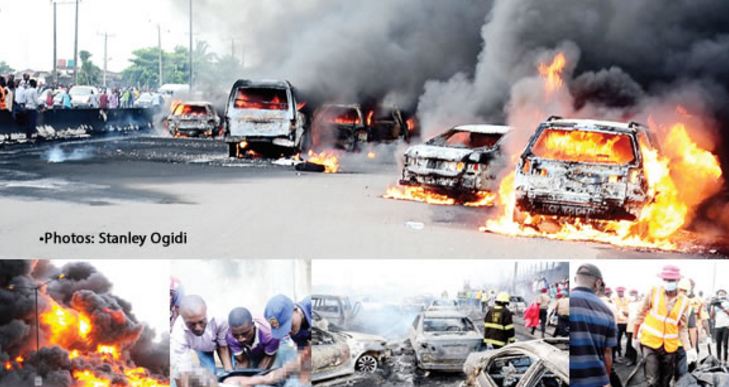 Tragedy struck on Thursday at the Otedola Bridge, Lagos end of the Lagos-Ibadan Expressway, after a petrol-laden tanker crashed and exploded.

No fewer than 54 cars and commercial vehicles driving behind the tanker on the road were said to have been gutted by fire, during which nine people were reportedly killed.

Emergency management workers were said to have been mobilised to the scene to rescue commuters trapped in the accident.

PUNCH Metro learnt that some motorists, who made a U-turn and attempted to flee the scene of the incident, crashed into other vehicles.

Lives were reportedly lost in the secondary accident that resulted from the confusion caused by the fallen tanker.

An eyewitness, Nkechi Obiageli, said the accident occurred around 5pm.

She said, “I was in a commercial bus heading towards the Mowe area of Ogun State. The bus was beside  the tanker.

“There was traffic and when it cleared a little, the bus driver manoeuvred his way to the front. We were about a few vehicles away from the tanker, when we heard the sound of an explosion.

“The fuel from the tanker spilled on the expressway and all the vehicles at its back went up in flames. People ran for dear life. There was confusion everywhere.”

A bus driver, Sunday Esene, said his vehicle was burnt in the accident.

He said, “I had just dropped off my passengers at Berger bus stop and turned to buy fuel. I was on my way back when I saw the tanker. All of a sudden, it tumbled and hit the median. As soon as I realised that fuel was spilling out of the tanker, I abandoned my bus and jumped to the other side of the road. A few seconds later, the tanker exploded. I am sure over 50 vehicles got burnt with many lives lost.”

A motorist, Aderibigbe Oluwafemi, said he escaped death by a whisker as the tanker was in front of his vehicle.

He said, “We were in traffic.  When the traffic eased a little, I noticed that the tanker in my front did not move. The next thing I saw was that the tanker started moving backwards and it fell. Immediately it fell, I opened my door, removed my key, phone and jumped to the other side of the road. My car got burnt, but I am happy to be alive.”

The General Manager, LASEMA, Adeshina Tiamiyu, said firefighters had put out the fire.

He added that some motorists were killed while attempting to run away from the scene of the fire.

He said, “The accident happened around 5.25pm and involved a tanker loaded with petrol.  The tanker fell and spilled its content, causing fire which burnt 54 vehicles. The vehicles, which were of different models, were trapped behind the truck.

“Some motorists, who turned to run away, crashed into other vehicles. Some jumped out and others fell into the gutter in the course of running away. We found dead bodies on the ground and in the gutter. Some of the people who died in the gutter had probably been caught by the fire and jumped into the gutter to put it out.

See the aerial video of the scene of the fuel tanker fire:

He noted that the tanker was conveying 33,000 litres of fuel.

“The tanker was attempting to climb the steep road that connects to the expressway when it developed a fault. Our men from the Alausa, Ikeja, Ilupeju and Bolade stations responded. But the time we got there, the fuel was already spilling down the road and had caught up with a lot of vehicles. We got there four minutes after receiving the alert around 5.25pm,” he said

The Lagos State Sector Commander, FRSC, Hygenus Omege, confirmed that 54 vehicles were burnt in the inferno.

He said, “It is obvious that the driver lost control of the tanker. We heard the tanker suffered brake failure. We have counted 54 burnt vehicles. Four people, who were rescued, are in the emergency unit and about nine bodies have been recovered.”

Omege said one tanker, five buses, two trucks, one tricycle and 45 cars were burnt in the inferno.

The commander of the RRS, Olatunji Disu, said about 500 policemen had been deployed in the area by the state Commissioner of Police, Edgal Imohimi.

Disu said the police had a tough time controlling a crowd of stranded commuters who were trapped in the traffic that had extended to the Third Mainland Bridge.

He said, “This is a major expressway leading out of Lagos. At the moment, the CP has mobilised 500 policemen in the area to assist with crowd control. The traffic has extended to the Third Mainland Bridge and people have started trekking down. They want to go home. We are still expecting more crowd and we are making announcements for people to pass other routes and leave this place for us to finish the emergency duty.”

He added that nine dead bodies were recovered.

“As soon as we got the information, our men mobilised sister agencies to the scene.

“The CP is saddened by this tragedy and he sends his condolences to the victims’ families. He has warned tanker drivers and drivers of articulated vehicles to make sure that they put in all necessary safety checks before putting their vehicles on the road,” he added.

The government in a statement by the Commissioner for Information and Strategy, Kehinde Bamigbetan, described the incident as a sad development.

He said, “On behalf of the Lagos State Government, we extend our commiseration to the families of persons who lost their lives, as well as those who lost their property to the incident.

“As a government, we will not relent in putting measures in place to ensure safety of lives and property of all residents.”

The commissioner said Governor Akinwunmi Ambode had directed all relevant agencies to ensure that those in need were adequately taken care of.

In the same vein, President Muhammadu Buhari described the incident as one of the greatest tragedies witnessed in the country in recent times.

Buhari said this in a statement by his Senior Special Assistant on Media and Publicity, Garba Shehu.

Buhari said expressed his condolences to the government and people of Lagos State on the tragedy.

“Sadly, this seems to be one of the greatest tragedies we have seen in recent times,” Buhari said.

The President urged the emergency services and law enforcement officials to do their best to limit the losses and damage from the incident.