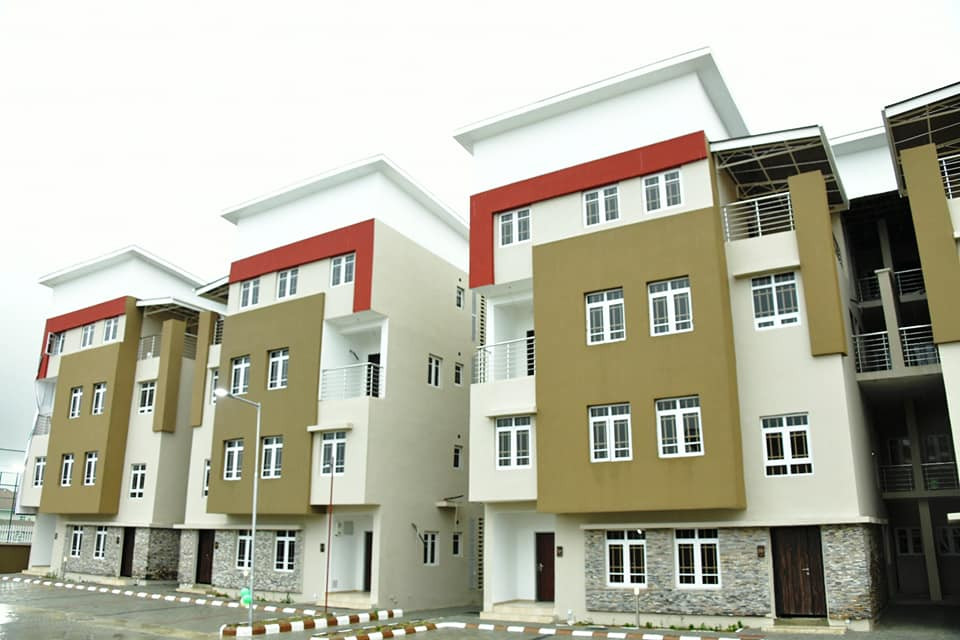 By Uche Amunike
Nigerians have advised the Lagos State Governor, Babajide Sanwo-Olu, to leave his footprints in the sands of time by trying to be like Jakande, who left a lot of legacies even so many years after he vacated office as Governor of Lagos state.
This charge came after Governor Sanwo-Olu commissioned 100 units of houses at Ikate-Elegushi on Wednesday.
During the commissioning, the Lagos State governor said that the project was part of a way to increase access of the people to the stock of available houses.
The newly commissioned Bayview Estate as it is called, is a joint business venture owned by the Lagos State Development and Property Corporation and Misa Limited. Its location is right behind Enyo Filling Station, right beside Still Waters Garden.
According to the Governor, it consists of 68 terraces of 4 bedrooms and 32 flats of three bedrooms on a total land area of 23000 square metres, saying that it is a way of his government to show their consistency in keeping to their promises of partnering with the private sector to deliver good houses to Lagos.
This did not go down well with citizens as they accused the Lagos authorities of building houses that the middle class will not be able to afford.
In a reaction, citizens spoke their minds on the governor’s Facebook page where he made the offending post, which was what led to them advising him to be like Jakande.
One Obuh Nelson posited that the elites usually by such structures and resell to the commoners, therefore the next time he will build a housing estate he should be like Jakande and build something affordable for minimum wage earners. That way, they will know that he has delivered dividends of democracy.
Richard Alaribe posted that Sanwo-Olu cannot claim to be providing affordable houses to the masses knowing that houses within and around that area is not affordable and not for the masses.
As for Ikay Fezzas, these were his exact words: ‘The amount involved has made the houses impossible to be affordable by the low-income earners. Which promise has been fulfilled, when the middle class cannot afford it? Was the promise made to the electorates or the elites? Needless of making the commissioning public when the elites will still have it, while the electorates remain in their impoverished condition.’
Another Facebook user, Babalola Imoleaye was very passionate in his post. Hear him: ‘Someone said in the comment that each apartment goes for 50 million Naira. People living at Ajegunle, Iyana Ipaja, Ikorodu, Epe and Ilaje, who are bricklayers, electricians, welders, carpenters and teachers can now afford these affordables. When we’re through deceiving ourselves in this country, we will sit and have a rethink.’
Recall that the late Chief Obafemi Awolowo governed Lagos state from 1979 to 1983 and served as a Minister of works during Sani Abacha’s regime.
He was fondly called LKJ and remembered for so many things today like the free education scheme which he implemented in Lagos State during his tenure and beyond; the increment of primary schools in Lagos from 605 to 812, not forgetting constructing Ikorodu and Gbagada General hospitals as well as 20 health centres across the state.
Jakande also wrote his name in gold by leaving behind the signature project of over 30,000 units in 16 low-cost housing estates in different parts of Lagos.
When he passed on in February former Lagos State governor and APC Chieftain, Ashiwaju Bola Tinubu declared that nobody could ever match Chief Lateef Jakande’s record.
Thousands of citizens gained from the housing infrastructure which still provides income for the owners and shelter for accommodation seekers. However the Lagos Building Investment Corporation, (LBIC ) still does not maintain the estates that provided succour to middle and low-income earners.
The successive administrations rather prefer to build fancy estate sold for tens of millions of naira which is way out of reach for struggling Nigerians.
QUICK SHARE: