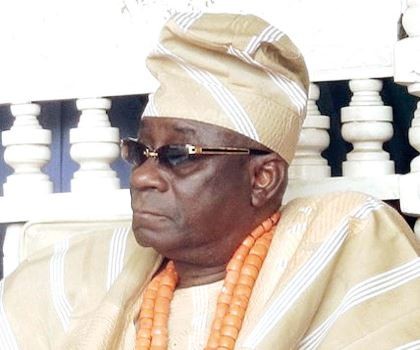 Oba of Lagos Rilwan Akiolu has come under fire from a number of Nigerians due to a recent interview he granted a journalist.

In the video shared by comedian Wale Gates, the Oba is seen answering questions from a female presenter who asked him about his olori’s (wives). The king replies that his wives are fine and that his last wife is a judicial officer.

He then jokingly asks the reporter if she is interested in joining them. He further speaks on how men need to love women.

Respect Yoruba men, Kabiyesi is “shooting is his shot” on live tv.
We have enough love to go round. 😜😜😜😜😆😆😆😆 pic.twitter.com/Ui9NTscRWh

However, a number of Nigerians have reacted to the video. Some say the Oba is harassing the woman while others feel the king was just joking.

See their tweets below:

Ms Kent thinks the video is not funny and that the presenter is being harrased.

It’s interesting most of you find this funny😳. Such a shame a girl has to be so harassed while at her duty post! And Ofcourse the power play and need to keep her job ensured she could only laugh lest she gets mad! Shameless man. People’s husband and father!😡

Adebayo replies that women are being unnecessarily sensitive. He adds that women should find their sense of humour.

You ladies are just becoming unnecessarily sensitive… any form of joke is harassment, common where is your sense of humour? Abeg take a chilled coke and relax

Adebayo continues saying even though his wife was the one involved, he still thinks its a joke

I will be relaxed… Cos one, it was obviously a joke and on Tv for pete sake… It wasnt like it was in a closed space… secondly, even if he wasnt on Tv or wasnt joking, your wife will definitely attract guys and they will ask her out… so, will i kill myself over insecurity?

Nimi feels her laughter is due to discomfort.

Ngo also feels her laughter was because she was uncomfortable.

I actually felt sorry for her… I know that uncomfortable laughter.

Devaan thinks the presenter was worried about what her husband will think.

Extremely 😂
Poor thing sat there giggling and hoping hubby doesn’t get upset when he sees this.
She had to giggle guys.
She had to.

Isaac thinks a man who doesn’t flirt with women on TV is rare.

Sad truth. Most ladies have at least one such experience. Esp when your work requires constant interaction with other humans.

I used to work in TV & I can tell you that a man (TV staff or guest) that doesn't flirt with women is the exception.

Ayokunle doesn’t think the presenter’s husband will get angry.

Which nonsense hubby would get upset at this? Na wa for you people o

Aisha is proud of her son’s reaction to the video.

I did say I would get my son to watch the video. I took his reaction on camera. With all the reaction I saw here I held my breath and I wasn't disappointed. Just so you know he is 19 #ProudMum pic.twitter.com/Co8ZfQt5tu