The school management also banned students from having tattoos and dressing in a certain way considered “indecent” on campus.

This was disclosed in an Internal Memorandum released by the Registrar of the school, Dr. S. C. Enyindah last Wednesday, October 19, 2022, compelling all the students to obey the prohibitive order with immediate effect.

“I am further directed to inform you that this ban is sequel to a memo presented by the Committee of Provost and Deans and considered by Senate at its 291 Regular Meeting held on Thursday, 29th September, 2022.

“10. Wearing of tattered jean trousers by both male and female students. 11. Wearing of bathroom slippers or bon short to the classroom.

“I am in the circumstance, directed to draw the attention of all students to the above decision and hereby request that you please note and comply accordingly.” 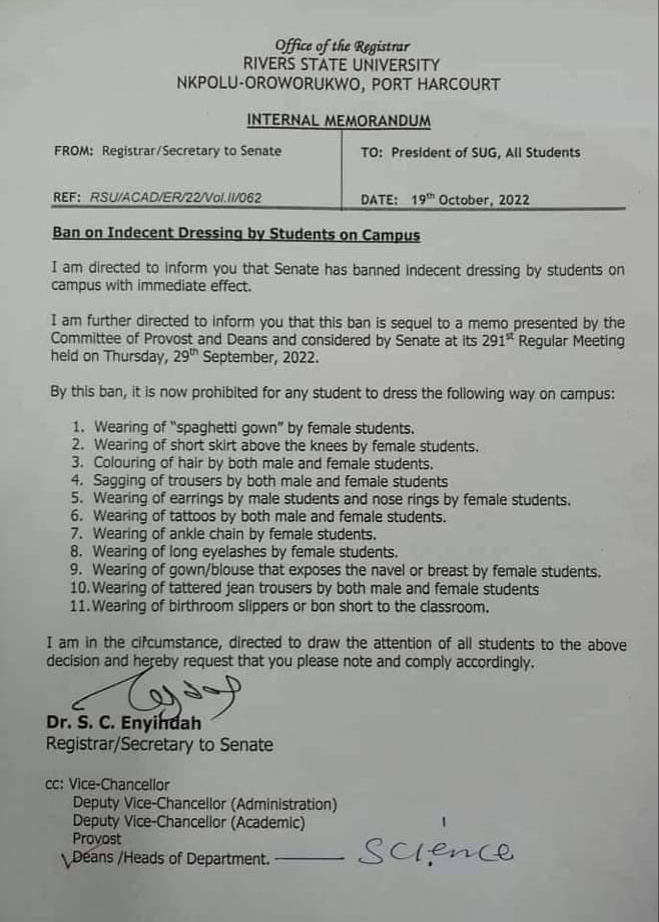 In a related development, SaharaReporters reported that the Anambra State Government placed a ban on the wearing of mini-length uniforms in schools across the state in September.

The state’s education commissioner, Prof. Ngozi Chuma-Udeh made this known during an interactive meeting with education secretaries of public and mission schools held in Awka.

The commissioner did not hide her displeasure at what she saw as “the growing trend of putting on mini-length uniforms (skirts/gowns) in schools”.

According to her, “it goes against the acceptable dress code for schools in the state.”