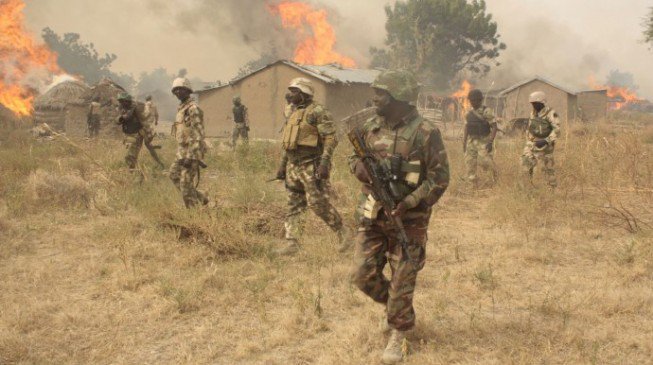 Seventy-six Boko Haram terrorists, among others, trying to overrun Nigeria’s military formation in Metele, near Kangarwa in Borno were killed today.

In what was a double blow to the terrorists on same day, Chadian troops also killed another 48.

According to the Nigerian Army Twitter posts, the gallant troops of the 157 Battalion overwhelmed the terrorists, with superior firepower, as they attempted to attack Nigerian positions.

“The sustained superior firepower of the troops led to the neutralisation of 76 BHTs”, the army said.

“Unfortunately, the Nigerian Army lost seven soldiers while 16 were wounded in action”.

“The Chief of army staff, Lt. General Buratai has commiserated with the families of the deceased and directed that the wounded be given adequate medical attention”.

In Chad, eight soldiers and 48 Boko Haram militants were killed in clashes on Wednesday, officials said.

Since 2009, tens of thousands of people in the region have died at the hands of the Sunni fundamentalists and an estimated 2.5 million people fled their homes.

The group’s goal is to enforce a strict interpretation of Islamic law, or sharia