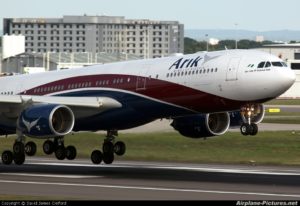 Hundreds of air travellers booked on Nigerian Arik airline are currently stranded across the country, following the inability of the airline to airlift them to their destinations.

Since early morning today, none of the airline’s aircraft has been operated to any destinations in Nigeria, West Africa and other routes.
SaharaReporters learnt that the massive debts of the airline to major oil marketers who regularly supply aviation fuel is partially responsible for the current situation of the airline. A source told our reporters that in addition to the airline’s inability to buy for fuel, its insurers in Europe and elsewhere had withdrawn insurance cover from the airline forcing the airline to stop flight operations altogether.

A source close to the oil marketers told our correspondent that the airline is a bad debtor as it currently owes at least N3 billion to all its suppliers, a situation, which has made them not to supply Jet A1 to the airline.

The sordid situation may also affect the airline’s long-haul operations to Heathrow Airport in London and New York in the United States of America.

A passenger with the airline, Chris Amokwu told our correspondent that he had been at the airport as early as 7:00 for a 7:30 am flight to Abuja, but as at 1 pm, he was yet to know if he would eventually make the trip to the Federal Capital Territory (FCT).

According to him, the airline attributed its inability to operate to the scarcity of Jet A1 and poor weather condition.

But, SaharaReporters can confirm that Jet A1 is available in the local scene as airlines like Med-View, Air Peace and Landover Airways have been operating since morning despite the alleged scarcity of aviation fuel and poor weather by the airline.

When our correspondent contacted the spokesman of the airline, Ola Adebanji, he said he was not aware of the development as he was still bereaved, having lost his mother over the weekend.

Arik Air is the third airline to shut down flight operations in Nigeria in the last three weeks following the suspension of flight by Aero Contractors and First Nation.