Miffed by the worsening insecurity in the country, Nigeria’s former Head of State, Gen. Abdulsalami Abubakar (rtd), yesterday expressed concern over the proliferation of all calibre of weapons in the country, which he estimated at six million.

Abubakar, who is also the Chairman of the National Peace Committee (NPC), painted the dire state of affairs in the country at a dialogue session of the committee with stakeholders at Transcorp Hilton in Abuja.

He lamented that the proliferation of weapons has heightened insecurity in the country and has led to over 80,000 deaths and close to three million Internally Displaced Persons (IDPs) across the country.

This is coming after a recent report by SBM Intelligence indicated that civilians were in possession of more arms than security officials in the country. The report detailed how the proliferation of small arms in Africa’s largest economy is fueling insecurity in the country.

“The number of small arms in circulation in Nigeria, in the hands of civilian non-state actors is estimated at 6,145,000, while the armed forces and law enforcement collectively account for 586,600 firearms,” the report said.

SBM said the trend of arms proliferation in Nigeria has an impact on the country’s internal security, which has led to violence, deaths and injury of citizens.

According to a Global Terrorism Index 2020 report, Nigeria was ranked the third most terrorised country in the world due to insecurity.

Abubakar said the challenges facing the country is not only a security issue in the narrow sense of military definition but that it has assumed an all-encompassing nature. He listed the challenges to include Boko Haram insurgency, banditry, kidnapping, increasing poverty, calls for the balkanization of the country from different quarters, threat of hunger arising from insecurity that farmers have faced and continue to face, increasing sense of collective despair and despondency among the populace.

Abdulsalami said: “The proliferation of all calibre of weapons in Nigeria is worrying. It is estimated that there are over six million of such weapons in circulation in the country. This certainly exacerbated the insecurity that led to over 80,000 deaths and close to three million internally displaced persons.”

The former Head of State also gave an assessment of the security situation, saying that the security forces are not just overstretched but under funded, noting that they can perform better with more sophisticated weapons, equipment and funding. 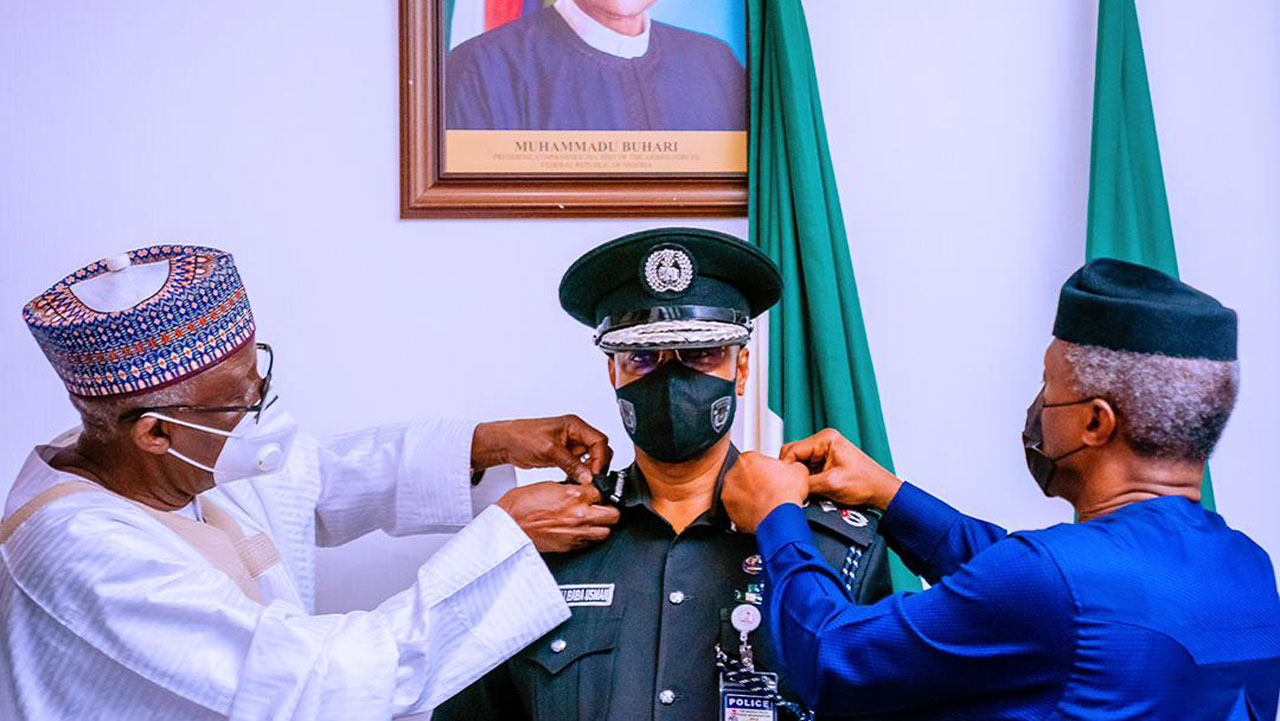 “We believe Nigeria must find a way out of these problems. Our hope is that perhaps among us, by listening to your different perspectives, we can begin to build up confidence among our people so that we can hold together. So our hope is that we shall not only share our collective lamentations about the current situation, but propose some concrete suggestions that can point the way forward, suggestions that can inspire more confidence among our people and ensure that our country remains one,” he said.

While welcoming the stakeholders, which included traditional rulers, Ekiti State Governor and Chairman of the Nigerian Governors’ Forum, Dr. Kayode Fayemi; Plateau State Governor and Chairman of the Northern Governors Forum, Simon Lalong; religious leaders, military, police and other security agencies, Abubakar said President Muhammadu Buhari was aware of the meeting and that he supported it.

He said the expectation is that the meeting will find out what are the causes of the conflict and how to mitigate them.

While the minister did not state the agenda or outcome of discussions at the meeting, it was gathered that security challenges plaguing the nation in recent times, amid rising calls for secession by various groups in the country and the 2023 elections topped matters deliberated at the meeting.

Vice President Yemi Osinbajo, yesterday, officially decorated Usman Alkali Baba Usman with the rank of the country’s Inspector-General of Police (IGP). President Buhari had on Tuesday approved the appointment of Usman as the acting police boss.

At the ceremony held in the State House, Abuja, Prof. Osinbajo charged the new IGP to work towards implementing the administration’s community policing policy, which has already taken off, in partnership with members of the local communities, so as to ward off criminal threats.

The Vice President also challenged the new helmsman to ensure that the highest standards of professional conduct begin to manifest in all the dealings by men and women of the service.

He told the IGP: “You are assuming office at a very turbulent time in the life of our people. There are multiple threats to law, order and public safety. The role of law enforcement and particularly that of the police force as primary agency charged with maintaining law and order has never been more important.

“The police is our institution of first resort, the first line of defence against crime and anarchy and the first sign of the strength of the state. We all expect that you will justify the confidence that Mr. President has repose in you, to enable you to lead the force in these times.”

Addressing newsmen after his decoration, the new police boss sought the cooperation of all Nigerians to entrench security for the citizens, even as he promised to rejig the operational strategy of the Nigeria Police.

“I came in at a very challenging time. I know it. I recognise it and I will work on how to improve from where my predecessor has left. I have been a member of the management team. We have tried to do our best, but it’s not enough. There is room for improvement. Definitely, we are going to rejig our operational strategies.”

Making a case for state police, Governor of Osun State, Gboyega Oyetola, has said the centralised policing system is not working in Nigeria, adding that to meet the current security challenges in the land, the Federal Government needs to decentralise the policing system.

IN furtherance of the shoot-on-sight directive by the president to AK-47-wielding herdsmen and bandits, operatives of the Nigeria Security and Civil Defence Corps (NSCDC) have arrested 50 arms-bearing herdsmen. This was disclosed by the Commandant-General of the NSCDC, Dr Ahmed Audi, yesterday in Abuja, while presenting licences to private guard operators.

He said: “We arrested 50 illegally armed herdsmen and realised that some of them are into cattle rustling and kidnapping. The armed herdsmen were arrested in Ekiti, Borno and Cross River states and in other parts of the country. It is part of our mandate to settle disputes between herdsmen and farmers and to also give some security protection to our agro-allied investments.”

Lamenting the security challenges, which, he said were asymmetric in nature, he assured that all would be well once relevant stakeholders adopted unity of purpose as their main objective. “The nation is bedeviled with a very serious insecurity crisis, and it is the asymmetric warfare.”

FOLLOWING the recent attacks on the facilities of the Nigerian Police and Correctional Services in Imo, the Lagos State Commissioner of Police, Hakeem Odumosu, has put police officers in Lagos on “red alert.” This was contained in a statement released yesterday by Muyiwa Adejobi, the Lagos police spokesperson.

Adejobi, a Chief Superintendent of Police, said Area Commanders, Mobile Police Commanders and Tactical Operational units were summoned by the police boss “to deliberate and review operational strategies of the command towards forestalling any attacks in the state.”

According to the official, the police boss also met with the Controller of Correctional Service Lagos State, Francis Adebisi, on Wednesday, to discuss tactics to prevent attacks on police and correctional facilities in the state.

“The Commissioner of Police, Lagos State, CP Hakeem Odumosu, in a bid to be proactive to (in) fortifying security in and around Police formations and Correctional Centres in Lagos State, has summoned the Area Commanders, Mobile Police Commanders and Commanders of the Tactical Operational Units of the command to deliberate and review operational strategies of the command towards forestalling any attacks in the state.

MEANWHILE, no fewer than 85 fleeing inmates have returned to Owerri Correctional Centre, which was attacked in the early hours of Monday by gunmen. It would be recalled that 1,884 inmates were freed when the gunmen struck the Correctional Centre and the Imo State Police Command headquarters in Owerri.

A source at the Centre said: “We now have about 85 inmates at our custody on Wednesday afternoon. We are hopeful that more inmates would return. Though the number has not been made public but I can confirm that as of this afternoon we now have 85 inmates.

When contacted, the Public Relations Officer of the Centre, James Madugba, said he could not immediately confirm the actual number of inmates who had returned. He, however, said that no fewer than 60 inmates had returned to the Correctional Centre.

But the acting Comptroller-General of the Nigeria Correctional Service (NCoS), in a statement signed by the Public Relations Officer of the service, Francis Enobore, said as at 4:00p.m. yesterday, the centre recovered a total of 48 inmates who escaped in the wake of the invasion, thus increasing the number of inmates presently in custody to 84 including those that resisted the temptation to escape during the attack.

Among the escapees, 11 were recaptured by men of the 211 Nigerian Airforce Base, Owerri while others either came back on their own volition or were returned by their relations, traditional rulers and religious leaders.

Acting on the directives of the Minister of Interior, Rauf Aregbesola, the Acting CG of Corrections, John Mrabure, has charged all staff in the command to go after the fleeing inmates and smoke them out of hiding at all cost. He read the riot act during the interactive session with personnel attached to the custodial centre.