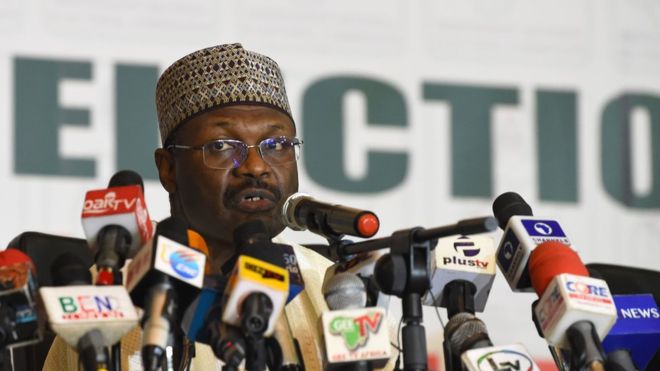 Last Saturday, 16 February, elections in Nigeria were halted just hours before polling had been due to get under way.

It was a huge inconvenience for millions of Nigerians, many of whom had travelled long distances to vote.

The poll will now be held tomorrow, Saturday, 23 February.

With the extra time to prepare, are things now in place for the vote?

Why was the poll postponed?

Both the main parties, the governing All Peoples Congress (APC) and the People’s Democratic Party (PDP), condemned the delay and blamed each other for meddling in the elections.

This isn’t the first time voters in Nigeria have been left in the lurch. It happened in the two previous presidential elections, in 2011 and 2015, and has led many to question the competence of the organising body, the Independent National Electoral Commission (Inec).

This time the commission cited various reasons for the delay:

Some of the issues cited are not within the powers of the electoral commission to control, such as the unpredictable nature of Nigeria’s weather.

But there are clearly other logistical factors that do need to be addressed if the election is to proceed smoothly.

Each of the 84 millions registered voters in Nigeria is required to bring a Permanent Voting Card (PVC), which is then verified at the polling station using a smart card reader.

However, many potential voters haven’t got PVCs – and the electoral commission itself says 11 million of the cards printed haven’t been collected.

That’s a big shortfall and won’t be rectified by polling day – meaning millions of registered voters won’t be able to cast ballots.

Then there are the machines used to verify voters – 180,000 smart card readers have been deployed to polling stations across the country.

All these machines were initially programmed to work on the originally planned voting day only, so they have all needed to be reprogrammed.

Inec says this process has been completed and the machines are ready for use.

It also says it has made up for 4,600 smart card readers destroyed in a fire in Anambra State, by redistributing devices from other states – although that may leave fewer back-up machines for polling stations in other regions.

Organising elections in Nigeria is a huge logistical challenge.

It’s a large country, with an estimated 200 million people, and many regions lack proper roads and infrastructure.

The electoral commission says ballot papers and election staff will be in place across the country.

Sensitive election materials such as ballot papers and result sheets are being held in local central banks, Inec has told BBC News.

However, reports from local media have highlighted further logistical mishaps and the destruction of election materials and resources.

Some election material has even been found in the wrong states.

Election officials are working with security forces to prevent disruption to the election.

And international election observers say it has been moving in the right direction..

“I think Inec have definitely picked up their game,” says John Tomaszewski, the International Republican Institute’s regional director for Africa.

But some concerns around security remain, especially over:

But last week, in the run-up to the originally planned election day, Boko Haram coordinated a series of attacks and suicide bombings on military bases and a neighbourhood in the north-eastern city of Maiduguri.

And Idayat Hassan, from Abuja-based think tank the Centre for Democracy and Development, says: “The likelihood of Boko Haram attacking during the elections is high – the insurgents have consistently express aversion towards democracy and elections.”

Meanwhile, in other states, such as Zamfara, in northern-most Nigeria, kidnappings, killings and general lawlessness are also raising voters’ fears.