In the last decade, several unemployed and restive Niger Delta youth, who feel entitled to oil wealth in their domains, have taken to the creeks, puncturing pipelines carrying crude oil to Nigeria’s export terminal, and refining it using primitive methods. Though the proliferation of this business seems to be filling the gap left by the country’s dysfunctional refineries as well as superficially enriching the communities, the level of ecological degradation to an already heavily-polluted environment is staggering. ABIOSE ADELAJA ADAMS, Bertha fellow, meets one of the camp owners. 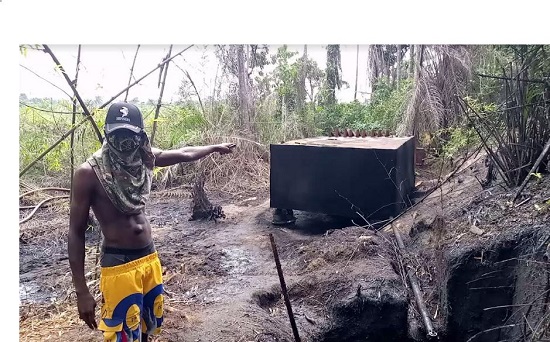 Popularly called ‘Virgin Boy’, a young man who works in Barinada’s camp shows their operations at the waterside in Mogho, Gokana

His real name is not Barinada. But that is how he preferred to be addressed. He refused to be photographed or videoed. Initially, he refused to disclose the kind of business he was involved in. But after agreeing to be paid some fee, he opened up.

Attired in a brown short-sleeved shirt and a baseball cap drawn to his brows, he sat in an open-air restaurant with this reporter in his hometown in Gokana local government area of Rivers state, southern Nigeria. His look was suggestive of one on the run, for he had been, on several occasions, arrested by security operatives over crude oil theft. He fixed a confident gaze, but his hands were far from exuding confidence. They were as shaky as his voice which hung on the lowest key. When you talk of owners of artisanal refineries (popularly called ‘kpofire’) in Ogoni area of the Niger Delta region, Barinada is a major stakeholder in a business that has now become the alternative source of livelihood for many Niger Delta communities.

HUSTLERS BY DAY, MILLIONAIRES BY NIGHT 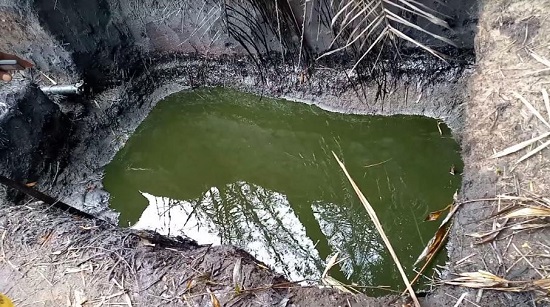 In just one night, he earns between N1.3 million and N2 million — and between N39 million and N60 million in a month — for boiling stolen crude, which he sells to both host communities and tanker drivers who travel from as far as Sokoto and Kano in northern Nigeria.

“I have a barge. Inside the barge, I have drums that can contain the crude that I tap (from the federal line). The drums are up to 80,000 litres. If I can get this amount once a week, I am comfortable for the whole week. I will distribute the fuel to my five sites. I can boil from Monday to Friday and sometimes, I will still have leftover,” he said, repressing a crude smile.

Barinada has a well-organised criminal network of at least 25 boys who boil the crude oil every night at five different sites, which he calls ‘ the waterside’. According to him, the boys earn N5,000 per night of boiling which amounts to N100,000 in 20 days (approximately one month). Aside from those involved in the boiling, he also has boys who go into the river to burst the pipes where crude oil flows through the pipeline to the Bonny export terminal. After that, he boils at the five sites of his bush refinery, and then transports his final product to the end-user. According to him, he started with one site, and expanded to five, and still hopes to expand to ten. 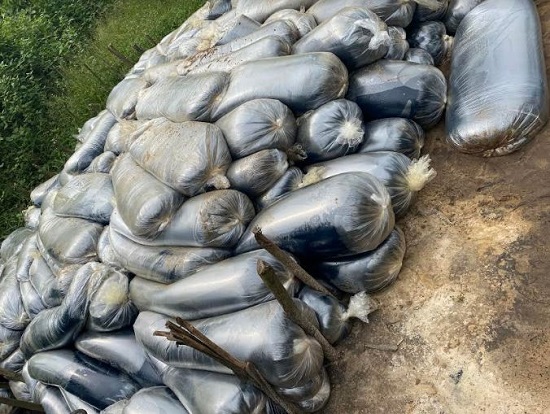 Diesel loaded in polythene bags for onward sales and distribution

According to Barinada, this business which he has been involved in for the past seven years, has lifted thousands of Ogoni youth out of poverty, and delivered them from social vices. He, however, said he cannot stop yet because he is helping the Nigerian government provide employment for the high number of unemployed youth. He is himself a graduate of civil engineering from Rivers State University of Science and Technology, who hopes to go into politics once he has made enough money from the business.

Comparatively, for these school drop-outs and unskilled teenage boys, an average of N100,000 per month is a lot of money. And it is three times higher than Nigeria’s minimum wage of N30,000. 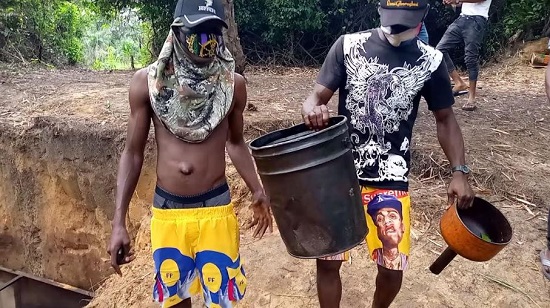 Barinada sent 16 of his boys to take this reporter to the riverside — a place called Mogho, in Gokana area. The river is the habitat of biodiverse aquatic lives, but owing to refining activities, it has become a lifeless waterbody. A 24-year-old who led the gang — ‘Virgin Boy’, as he is popularly called — dived into the river and swam towards the direction of the line. Anger, pain, frustration and total lack of faith in the government could be felt in their voices as the 16 of them, out of eagerness, wanted to speak at once. They said they have no potable water, healthcare, jobs and yet they sit idly on deposits of crude. They said they usually listen to the pressure of the pipeline to know when it is carrying crude. They also demonstrated how they use a rubber tube to connect to the line and pass it right into their bush factory.

Inside the bush refinery, the crude oil is initially stored in a well-dug pit in the ground, after which it is transferred into the tank. As soon as the operation begins, the massive tank containing the crude oil is set on an open fire that heats the crude. Beside it, is a humongous cooling tank which the oil passes through to the point where it is distilled into its fractional components. What comes out first is the gas — a huge amount of gas is being flared. Next is the petrol, and then kerosene, diesel, engine oil and lastly is coal tar (waste).

Barinada said he got the experience from palm wine tappers who make ‘ogogoro’ (local gin) from the same fractional distillation technology. However, the products from these local methods are not always at their optimum. For instance, very well refined petrol is popularly called, in the community, ‘dry fuel.’ There is the one called ‘wet fuel’ (not very well-refined and it is injurious to motor engines).

A recent research by the Nigeria Extractive Industries Transparency Initiatives (NEITI) shows that this sector employed about half a million people in the Niger Delta, and the GDP is about three times the national average. Several Niger Delta youth interviewed said they are into the business because the government destroyed their habitat following decades of oil exploration. There is no safe drinking water in many areas of Ogoni; many people have become environmental refugees, while several have lost their major sources of livelihood — fishing and farming. Despite the government’s intervention in the region, there is a high level of mistrust, and disgruntled youth, tired of carrying weapons, have toed the path of bunkering and artisanal refinery. 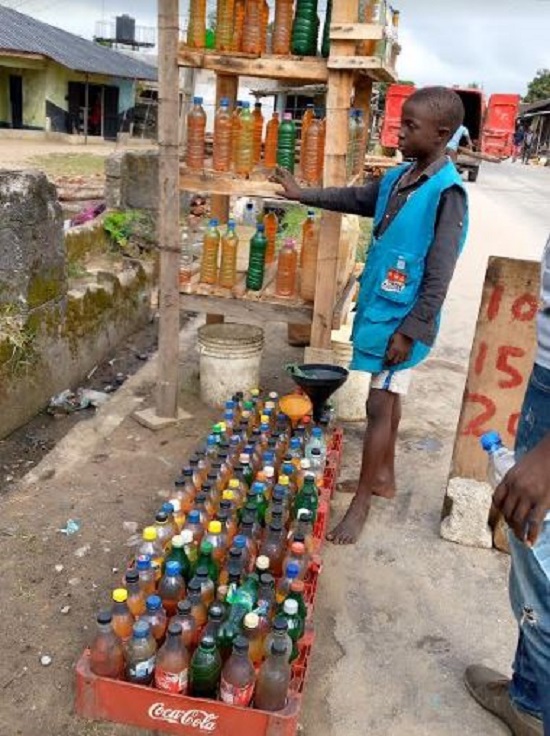 A typical retail market for products from artisanal refineries in Gokana

Taking a tour around Gokana in Ogoniland, it seems almost the whole community leans on this trade for survival. A little far-flung from the city, hardly any petrol station was noticed. It is common to see kiosks and makeshift filling stations comprising 25 litre-kegs, and some bottles of oil and a funnel. ‘Buy your fuel here’ signposts were commonly seen on the streets and markets. 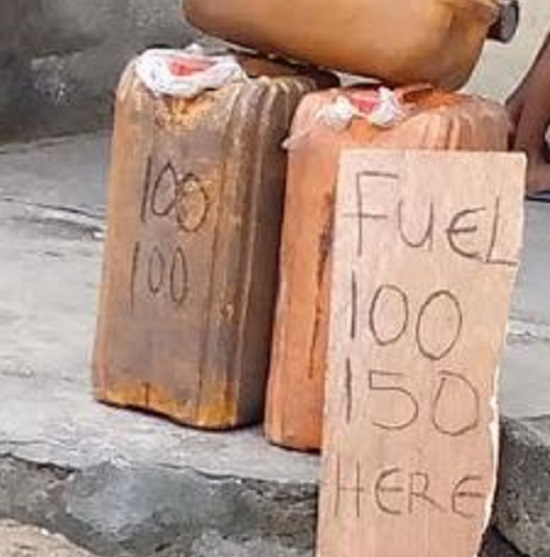 Products from artisanal refineries such as Barinada’s meet the high demand for cooking fuels such as kerosene, as well as for powering generators, and motorcycles used as transport shuttles within the community. It is also cheaper than the fuel sold at recognised filling stations. At the filling station, petrol sells for N170 per litre, but fuel from these bush refineries sell as low as N100 per litre — this is about 80 percent lower in price.

And sometimes, Barinada and other refiners give out these products freely as part of their community service to the locals. 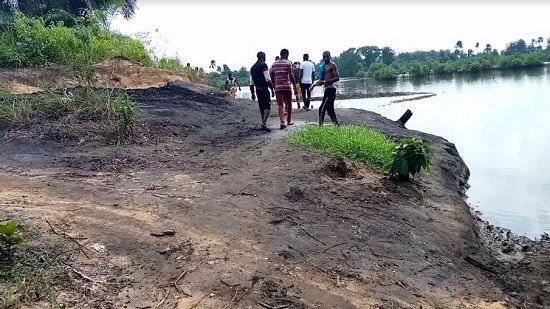 While at Barinada’s bush refinery near the waterside, TheCable saw a cassava farm with very few crops. A greater part of the vegetation was soiled with oil and crops can no longer grow, yet a woman of about 47, Sira Ledum, was seen bent over, tilling the ground with beads of sweat on her forehead.

“They have spoilt this place. Every day, this place will be full of black smoke. When rain falls now, it will wash all the oil from that area to my farm. I have complained and complained. There is nothing we can do. Anything we see, we eat,” she said.

Another resident of Gokana, Emma Pii, told this reporter that he has been suffering from lung trouble. “When these ‘kpo fire’ boys start their thing, we cannot breathe again. All my chest will be choked, but what can we do,” he lamented.

A careful look at the area of operation shows a huge and pitiable degradation of the environment. There is destruction of vast quantities of mangrove forests which have been proven to be climate sinks, with the ability to sequester carbon more than the rain forests.

Also seen in the illegal refineries are huge amounts of coal tar carelessly disposed around the creeks, which are, consequently washed into the ponds and streams, killing aquatic life. 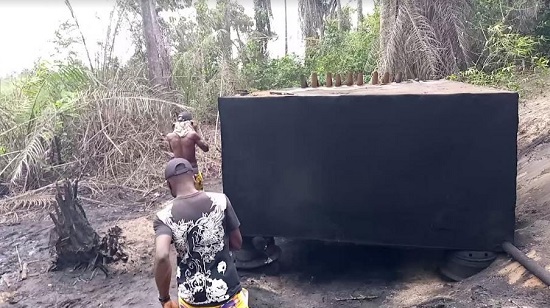 The black cooling tank inside the refiner’s camp

In its 2011 recommendation for the clean-up of Ogoniland, the United Nations Environment Programme, reports that one of the ways to restore the Ogoni environment is to provide alternative sources of income for the unemployed youth that burst government pipelines. A total sum of USD10,000,000 was recommended to provide alternative sources of income to artisanal refineries across the Niger Delta.

Barinada testified to the Nigerian government’s initial attempt to stop them from bunkering.

“In 2013, they told us they want us to stop this business and that we should bring our wares. So we brought all our pots and tanks, loaded it up to the sky. They said they will find us something to do, but nothing came out of that. They are only just using us to get what they want. They are not helping the locals, so we have to help ourselves,” he said.

WHEN WILL THIS POLLUTION STOP? 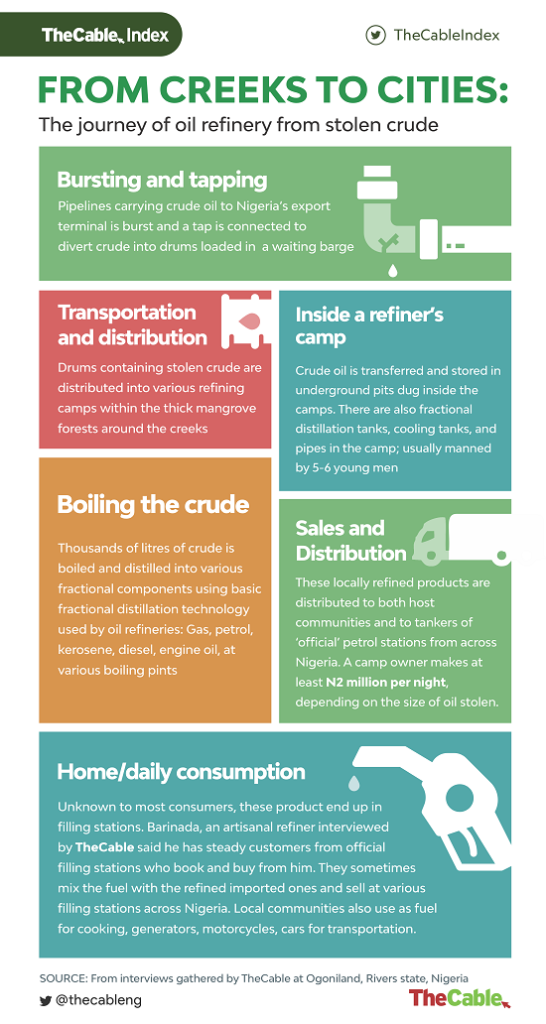 “It is when they settle the Ogonis that local bunkering will stop,” Barinada said. “They should settle us. Look at us, look at our water; all our farms have been destroyed. We cannot go and steal. We are making use of our property. It is the available means that we are using. We respect the federal government, that is why we run when they come after us. We don’t carry guns. We run; that means we know we cannot fight the government.”

Around 150,000 to 300,000 litres of crude are stolen daily, according to official figures from the government. Apart from the economic loss and the criminality of it, these activities — gas flaring (Nigeria is among the top six greenhouse gas emitters in Africa), huge deposits of coal tar seeping into arable soil, destruction of rain and mangrove forest covers, biodiversity loss arising from oil spills into rivers and creeks — have grave implications on the health and environment, and Nigeria’s commitment in the Paris Accord to contributing to a less warmer climate.