Ngozi Okonjo-Iweala (born 13 June 1954) is a Nigerian economist and its first female minister of Finance.

She served two terms as Finance Minister of Nigeria (2003-2006, 2011-2015) and was previously Managing Director of theWorld Bank (2007-2011). She currently chairs the Board of the Global Alliance for Vaccines and Immunization (GAVI) and the African Risk Capacity (ARC). She is also a Senior Adviser at Lazard.

Okonjo-Iweala is from Ogwashi-Ukwu, Delta State, where her father Professor Chukwuka Okonjo is the Eze (King) from the Obahai Royal Family of Ogwashi-Ukwu.

She is married to Dr. Ikemba Iweala, a neurosurgeon from Umuahia, Abia State, and they have four children, includingUzodinma Iweala. 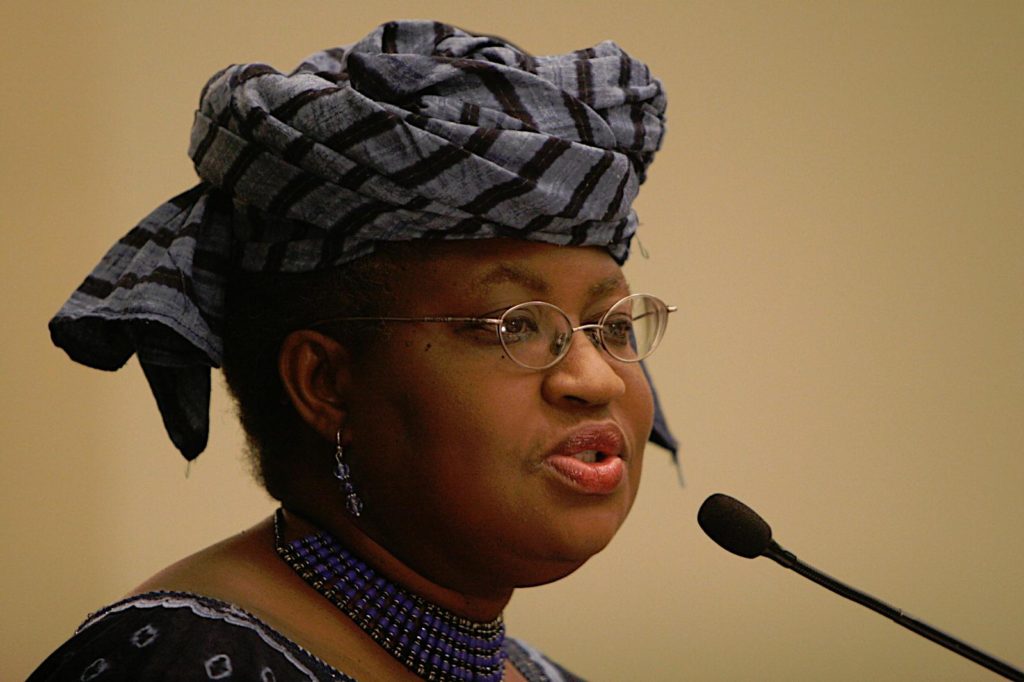 Okonjo-Iweala served twice as Nigeria’s Finance Minister and also as Minister of Foreign Affairs. She was the first female to hold both positions. During her first term as Minister of Finance under President Obasanjo’s Administration, she spearheaded negotiations with the Paris Club of Creditors that led to the wiping out of US$30 billion of Nigeria’s debt, including the outright cancellation of US$18 billion.

In 2003 she led efforts to improve Nigeria’s macroeconomic management including the implementation of an oil-price based fiscal rule where revenues accruing above a reference benchmark oil price were saved in a special account, “The Excess Crude Account” which helped to reduce macroeconomic volatility.

She also introduced the practice of publishing each state’s monthly financial allocation from the Federal Government of Nigeria in the newspapers. This action went a long way in increasing transparency in governance. With the support of the World Bank and the IMF to the Federal Government of Nigeria, she helped build an electronic financial management platform-the Government Integrated Financial Management and Information System (GIFMIS), including the Treasury Single Account (TSA) and the Integrated Payroll and Personnel Information System (IPPIS), helping to curtail corruption in the process. As at 31 December 2014, the IPPIS platform for example had eliminated 62,893 ghost workers from the system and saved the Nigerian government about $1.25 billion in the process.

Okonjo-Iweala was also instrumental in helping Nigeria obtain its first ever sovereign credit rating (of BB minus) from Fitch Ratings and Standard & Poor’s in 2006.

Following her first term as Minister of Finance, she returned to the World Bank as a Managing Director in December 2007. Okonjo-Iweala had also previously spent the first 21 years of her career as a development economist at the World Bank. As Managing Director, she had oversight responsibility for the World Bank’s $81 billion operational portfolio in Africa, South Asia, Europe and Central Asia.

Okonjo-Iweala spearheaded several World Bank initiatives to assist low-income countries during the 2008 – 2009 food crises and later during the financial crisis. In 2010, she was chair of the IDA replenishment, World Bank’s successful drive to raise $49.3 billion in grants and low interest credit for the poorest countries in the world.

In 2011, Okonjo-Iweala was reappointed as Minister of Finance in Nigeria with the expanded portfolio of the Coordinating Minister for the Economy by President Goodluck Jonathan. Her legacy includes strengthening Nigeria’s public financial systems, stimulating the housing sector with the establishment of the Nigerian Mortgage Refinance Corporation (NMRC).[9] She also empowered Nigeria’s women and youth with the Growing Girls and Women in Nigeria Programme (GWIN); a gender responsive budgeting system[10] and the highly acclaimed Youth Enterprise with Innovation programme (YouWIN); a highly acclaimed programme to support entrepreneurs that created thousands of jobs.

This program has been evaluated by the World Bank as one of the most effective programmes of its kind globally. Under her leadership, the National Bureau of Statistics carried out a rebasing exercise; the first in 24 years, which saw Nigeria emerge as the largest economy in Africa. She took a lot of heat, more-so than any other government official for the fuel subsidy removal policy by the Nigerian government which led to protests in January 2012. In May 2016, the new Nigerian administration eventually removed the fuel subsidy after it became apparent that it was unsustainable and inefficient.

In September 2015, she joined Lazard as a Senior Advisor and in January 2016 she was appointed Chair of the Global Alliance for Vaccines and Immunization (GAVI).

She is co-chair of the Global Commission for the Economy and Climate, with Nicholas Stern and Paul Polman. In July 2017, she was named the independent non-executive director at standard Chartered PLC, which will be effective from November 1, 2017[17] 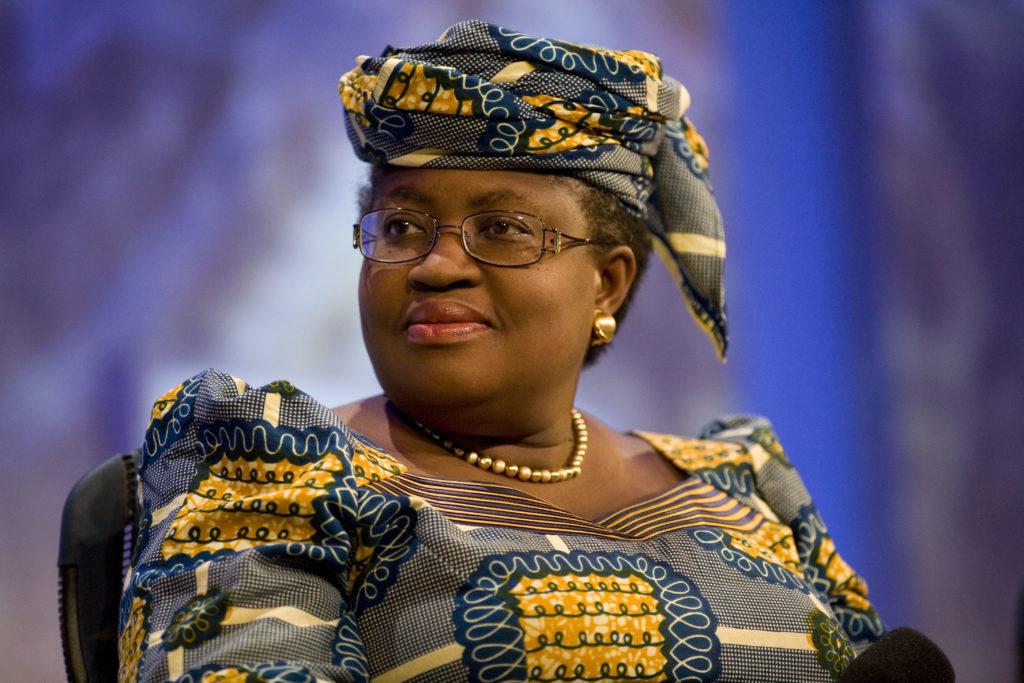 Okonjo-Iweala is Chair of the Board of the African Union’s African Risk Capacity, an innovative weather based insurance mechanism for African countries. She is also Chair of the Board of the Nelson Mandela Institution, an umbrella body for the African Institutes of Science and Technology and Chair of the Board of the [African University of Science and Technology]] in Nigeria. In addition, she is a member of numerous boards and advisory groups, including the Rockefeller Foundation, the University of Oxford’s Blavatnik School of Government’s International Advisory Board, the Harvard University Advisory Council, the University of Oxford Martin School’s Advisory Council, the Asian Infrastructure Investment Bank International Advisory Panel, the International Commission on Financing Global Education (Chaired by Gordon Brown), the Center for Global Development, the Mercy Corp Global Leadership Council, the Women’s World Banking, Results for Development Institute, the World Economic Forum Young Global Leaders Foundation, the B Team (Co-chaired by Sir Richard Branson), the Commission on the New Climate Economy (co-Chaired by President Felipe Calderon and Lord Nicholas Stern) and the Global Development Network amongst others.

Previously, she served as the co-Chair of the Global Partnership for Effective Development Cooperation and Chair of the World Bank’s Development Committee (2004). She was also a member of the International Monetary and Finance Committee of the IMF (2003-2006 and 2011-2015), the United Nations’ Secretary General’s High-Level Panel on the Post-2015 Development Agenda, the Danish-Government-led Commission on Africa, the World Economic Forum Global Leadership Council on Transparency and Corruption, and the renowned Commission on World Growth, led by Nobel Prize winner Professor Michael Spence. She has served on the advisory board of the Clinton Global Initiative and the ONE Foundation.

Okonjo-Iweala is the founder of Nigeria’s first indigenous opinion-research organization, NOI-Polls. She founded the Center for the Study of Economies of Africa (C-SEA), a development research think tank based in Abuja, Nigeria’s capital and is a Distinguished Visiting Fellow at the Center for Global Development and the Brookings Institution.

Okonjo-Iweala has received recognition and a number of awards. She was named one of the “50 Greatest World Leaders” by Fortune magazine in 2015, one of the “100 Most Influential People in the World” by Time magazine in 2014, and one of Foreign Policy magazine’s “Top 100 Global Thinkers” in 2012.