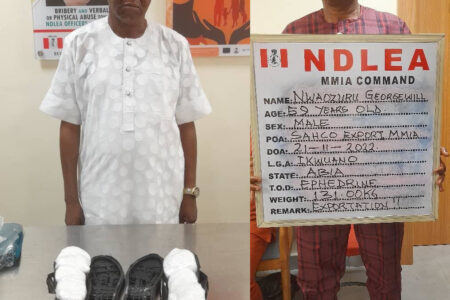 Officers of the National Drug Law Enforcement Agency (NDLEA) have cracked a major drug syndicate over the weekend, in Lagos, leading to the arrest of 59 year old drug peddler, Lawal Lateef Oyenuga, who was intercepted on his way to deliver 400 grams of Class A drug, hidden inside a pair of palm sandals in Jeddah, Saudi Arabia.

According to a statement released by the NDLEA Director, Media and Advocacy, Femi Babafemi, thorough scrutiny of the sandals  revealed that they were used to hide two parcels of cocaine.

On his part, Oyenuga admitted that he was recruited to peddle the drugs by a certain kingpin, Wasiu Sanmi Gbolahan, popularly called ‘Teacher’, with claims that he was first given some pellets of cocaine to swallow, but that when he couldn’t do so, he was given the ones that were hidden in the palm sandals.

He went on to confess that he resorted to being involved in criminal activities in order to raise funds to pay for the examination fees of his daughter in Senior Secondary School, Class 3.

The NDLEA database, ‘Teacher’ had been linked to previous attempts to smuggle cocaine into Saudi Arabia and Dubai, UAE. He was however, arrested for recruiting mules for a drug cartel and named as the man who also recruited a BRT driver, Bolajoko Muyiwa Babalola for Lagos socialite and hotel owner, Alhaji Ademola Afolabi Kazeem, CEO Adekaz Hotels, to traffic drugs into Dubai .

Bolajoko was nabbed, June 27th, while traveling to Dubai with 800 grams of cocaine, while Ademola Kareem was nabbed November 10, barely 19 days after he was declared wanted by the NDLEA.

The statement further read: ‘NDLEA operatives attached to the screening point of the Murtala Muhammed International Airport, Ikeja, Lagos had on Thursday 24th November intercepted Lawal Lateef Oyenuga with a pair of black palm sandals packed in the luggage he was going with to Jeddah, Saudi Arabia via Addis Ababa on an Ethiopian Airways flight.’

Shortly after this, a 56 year old widow with four children, Mrs Ajisegiri Kehinde Sidika was also arrested for trying to traffic 400 grams of cocaine hidden in her footwear as she was heading to Makkah, Saudi Arabia on board a Qatar Airways flight.

In a different operation by officers of the NDLEA another 1.10kg cannabis hidden in bottles of body cream being moved to Dubai was discovered. The cannabis was intercepted on September 9, while the owner, Wordy Hopewell Chukwuemeka, who owns a boutique in Port Harcourt was arrested, November 24, in Lagos.

A carton of food items used in concealing 500 grams of Cannabis headed to Dubai,UAE, was also intercepted, while the owner, Uzoma Kingsley was immediately arrested by operatives attached to the airport.

The Chairman/Chief Executive of NDLEA, Brig. Gen. Mohammed Buba Marwa lauded the officers for their professionalism while discharging their duties and achieving great results. He urged them to continue with their gallantry while staying cautious, especially as the festive season is around the corner .