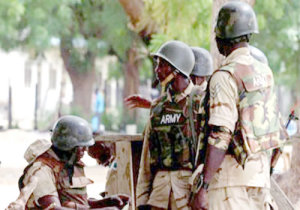 The Military High Command said on Friday it had commenced a probe to verify reports of alleged kidnap of  villagers in Borno State earlier this week.

It also said its officers were patrolling the area in search of terrorists.

A statement on the Defence Headquarters blog, said “troops are patrolling the general area of Gumsuri in search of terrorists who were said to have attacked the community last weekend.

Although it has been confirmed that some people were killed by the terrorists during the attack, the reported abductions as claimed by unidentified sources being quoted in some foreign media is yet to be verified from any credible sources in the community.

“Some of the villagers who fled during the attack have started returning to the village. Normal life has also returned to the area. The surveillance and patrol of the area by air and land forces has been stepped up to secure the general area.

“Troops have been ordered to sustain an aggressive patrol over the area and the surrounding communities in order to ensure that terrorists do not have any freedom of action in the area while the counter-terrorism campaign continues,” it said.

As Boko Haram continues its attack on residents of Borno State, politicians and key government officials have relocated to Abuja and other safe places with their families.

The relocation cuts across all political divides in the state with the more afluent ones among them moving their families abroad.

When Saturday Tribune called on the home of the chairman of PDP, Borno State, Alhaji Baba Basharu, one of his neighbours said he had not been seen in the last one month.

‘Mr journalist, if you want any interview with the chairman, you will have to travel to Abuja. That is where he lives but he was here a month ago,” the neighbour said.

The situation is the same with the chairman of APC in the state, Mr. Bukar Konduga.

‘’He left Maiduguri in company with the governor one week before the APC national  convention and it is not certain he will return anytime soon.

‘Anyway, why have you come to ask about him here? He has houses in Abuja, so why do you think he will stay here to dare the guns and bombs of terrorists?’’ he added.

A cross section of the residents who spoke with Saturday Tribune informed that neither the ruling party nor the opposition shows genuine democratic tendencies but are merely cashing on the forthcoming elections to play on the intelligence of eligible voters.

“Since the return to democratic rule, we have never had a single leader as a politician,” Umar Shugaba told Saturday Tribune.

Gambia’s Yahya Jammeh confirms he will step down